Citadel of New York, LLC was formed in July 2012 as a Joint Venture company owned by Roya Mahboob and

Film Annex Capital Partners. The Company provides target marketing and information technology (IT) solutions with a focus on education and philanthropy. Citadel is an Afghan, Italian, and American owned business with offices in Afghanistan and New York City.

Jerry Maguire is a 1996 Hollywood movie about a sports agent who has a moral epiphany and is fired by his large sports marketing firm for expressing profound thoughts about "Thought Leadership" in an internal company memo. Maguire, played by Tom Cruise, then decides to put his new philosophy to the test, and he creates his own sports marketing firm. Rod Tidwell is an NFL football player in the movie played by Cuba Gooding. Tidwell is the only athlete who stays with Jerry Maguire as the first client at the new firm. In one scene of the movie, Tidwell and Maguire are learning about their relationship, and Tidwell expresses his respect for some of the top players in the NFL and he defines "The Quan". Rod Tidwell:

"It means love, respect, community... and the dollars too. The package. The Quan."

"There was a time when successful companies held lavish parties. Executives flew in first class, wore Gold Rolex and drove European sport cars. Today, thanks to people like Bill Gates, success goes hand in hand with philanthropy and conversations are focused on social responsibility. Bill Gates and his wife Melinda started their foundation in 1994 and today the Bill and Melinda Gates Foundation has a $36.2 billion endowment. Warren Buffet joined forces with the Bill and Melinda Gates foundation in 2006."

Now we can't all donate the way that the Gates' and Buffet's can, so what can our clients do to achieve their own version of "The Quan"? Many of our "Target Thinking" clients come to us with a focused business model, and in the model above they are "B companies". As the business matures and the economy heals, we find that many are using a risk management model that includes both target marketing and philanthropy to achieve their individual version of "The Quan". Today, Microsoft is an "A company" and Bill Gates is seen at one of the top philanthropist in the world. 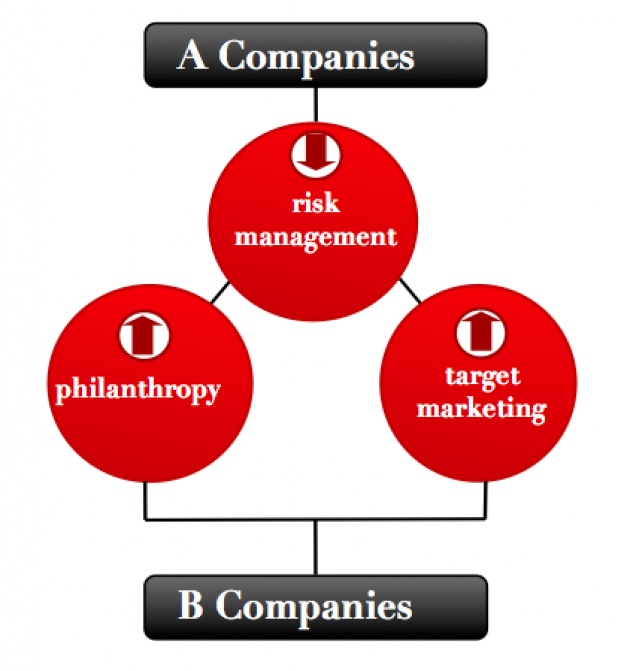 It was not that long ago that the United States Justice Department believed that Microsoft had used its monopoly in operating system software to protect its dominance and eliminate competitors. The government said that in the long run, consumers will be harmed, because there will be less competition and fewer choices.

More specifically, the government contended that Microsoft had engaged in actions to preserve its Windows monopoly that violated antitrust laws. Microsoft was referred to as "The Evil Empire" on a regular basis. Bill Gates then started the Bill and Melinda Gates Foundation, and both Gates and Microsoft are now seen as great citizens in the corporate and philanthropic communities. Was it philanthropy or "risk management"? Either way, it was a fantastic solution for all parties involved.

Our clients are also producing "self-sustaining" philanthropy models that will last through business cycles. Short-term giving will always have its place in the world, but our preferred model is the Social Entrepreneurship model of Muhammad Yunus, founder and manager of Grameen Bank and Captain Edward Zellem's Afghan Proverbs model on Film Annex. They are the future for the growth opportunities in developing countries and markets.