Chittorgarh Fort is one of the largest forts in India and probably the grandest in the state of Rajasthan. It is a World Heritage Site. The fort, popularly known as Chittor, was the capital of Mewar and is today situated in Chittorgarh City. It was initially ruled by Guhilot and later by Sisodias, the Suryavanshi clans of Chattari Rajputs, from the 7th century, until it was finally abandoned in 1568 after the siege by Emperor Akbar in 1567. It sprawls majestically over a hill 180 m (590.6 ft) in height spread over an area of 280 ha (691.9 acres) above the plains of the valley drained by the Berach River. The fort precinct with an evocative history is studded with a series of historical palaces, gates, temples and two prominent commemoration towers. These monumental ruins have inspired the imagination of tourists and writers for centuries.

Reflection of the Island in a water reservoir at Chittorgarh Fort, Rajasthan, India.

Photograph of two statues of elephant riders at Delhi from the Archaeological Survey of India Collections, taken by Joseph David Beglar in the 1870s. This is a general view of the statues, carved in red sandstone, which were originally mounted on a pair of life-sized black marble elephants. The riders became separated from their mounts and are shown displayed at either side of the entrance to an unidentified house. The figures are of the upper half only, with curved bases which would be seated on the backs of the elephants. The elephants stood outside the Delhi Gate at the Lal Qila or Red Fort and their riders represented Jaimal and Patta, two heroic Rajput chiefs who defended the fortress of Chitor against the Mughal emperor Akbar. In ‘Archaeological Survey of India: Four reports made during the years 1862-63-64-65’ (Simla, 1871), Alexander Cunningham concludes that the statues originally stood outside the fort at Agra and were brought from there to Delhi. At some point they were moved from the Delhi Gate but the elephants were later reinstated by Lord Curzon, Viceroy of India between 1899 and 1905. Print 877 from the same collection is a view of one of the elephants. 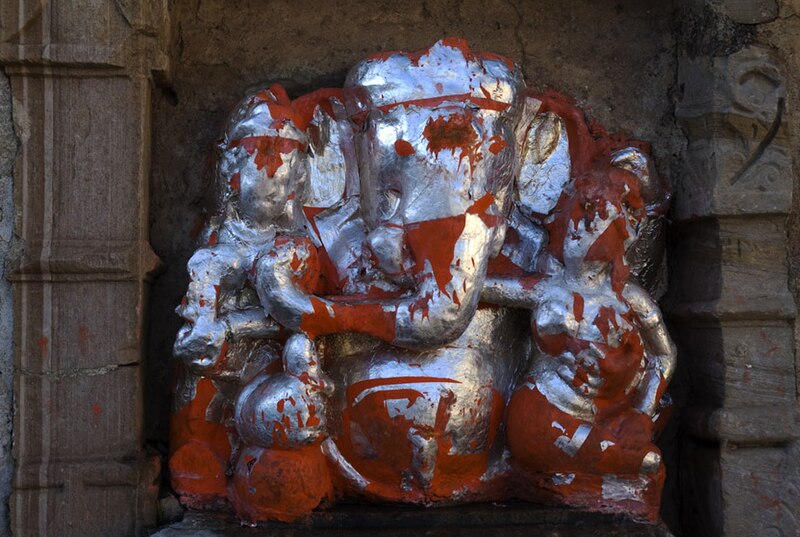 An ancient idol of Ganesh, the Elephant headed God at the historic Chittorgarh Fort, Rajasthan.

Photo of a reservoir inside Chittorgarh Fort, with the town in the background (Rajasthan, India)

The fort has total seven gates (in local language, gate is called Pol), namely the Padan Pol, Bhairon Pol, Hanuman Pol, Ganesh Pol, Jodla Pol, Laxman Pol and the main gate named the Ram Pol (Lord Rama's Gate). All the gateways to the fort have been built as massive stone structures with secure fortifications for military defense. The doors of the gates with pointed arches are reinforced to fend off elephants and cannon shots. The top of the gates have notched parapets for archers to shoot at the enemy army. A circular road within the fort links all the gates and provides access to the numerous monuments (ruined palaces and 130 temples) in the fort.

Stamaba views with other relics in Chittorgarh Fort, a steroscopic view

The Vijay Stambha (Tower of Victory) or Jaya Stambha, called the symbol of Chittor and a particularly bold expression of triumph, was erected by Rana Kumbha between 1458 and 1468 to commemorate his victory over Mahmud Shah I Khalji, the Sultan of Malwa, in 1440 AD. Built over a period of ten years, it raises 37.2 metres (122 ft) over a 47 square feet (4.4 m2) base in nine stories accessed through a narrow circular staircase of 157 steps (the interior is also carved) up to the 8th floor, from where there is good view of the plains and the new town of Chittor. The dome, which was a later addition, was damaged by lightning and repaired during the 19th century. The Stamba is now illuminated during the evenings and gives a beautiful view of Chittor from the top.

Kirti Stambha (Tower of Fame) is a 22 metres (72 ft) high tower built on a 30 feet (9.1 m) base with15 feet (4.6 m) at the top, is adorned with Jain sculptures on the outside and is older (probably 12th century) and smaller than the Victory Tower. Built by a Bagherwal Jain merchant Jijaji Rathod, it is dedicated to Adinath, the first Jain tirthankar (revered Jain teacher). In the lowest floor of the tower, figures of the various tirthankars of the Jain pantheon are seen in special niches formed to house them. These are digambara monuments. A narrow stairway with 54 steps leads through the six storeys to the top. The top pavilion that was added in the 15th century has 12 columns.

Photo of a reservoir inside Chittorgarh Fort, with the town in the background (Rajasthan, India)

A spring feeds the tank from a carved cow’s mouth in the cliff. This pool was the main source of water at the fort during the numerous sieges.

Rani Padmini was immortalised for her act of Jauhar which signifies the supreme value of a woman's identity. She chose death then to save her life by not giving away her body to the lusty muslims.

Padmini's Palace or Rani Padmini's Palace is a white building and a three storied structure (a 19th-century reconstruction of the original). It is located in the southern part of the fort. Chhatris (pavilions) crown the palace roofs and a water moat surrounds the palace. This style of palace became the forerunner of other palaces built in the state with the concept of Jal Mahal (palace surrounded by water). It is at this Palace where Alauddin was permitted to glimpse the mirror image of Rani Padmini, wife of Maharana Rattan Singh. It is widely believed that this glimpse of Padmini's beauty besotted him and convinced him to destroy Chittor in order to possess her. Maharana Rattan Singh was killed and Rani Padmini committed Jauhar. Rani Padmini's beauty has been compared to that of Cleopatra and her life story is an eternal legend in the history of Chittor. The bronze gates to this pavilion were removed and transported to Agra by Akbar.

The story of Padmini was the inspiration for Padmavat, an epic poem written in 1540 by Malik Muhammad Jayasi.

Close to Kirti Sthamba is the Meera Temple, or the Meerabai Temple. Rana Khumba built it in an ornate Indo–Aryan architectural style. It is associated with the mystic saint-poet Mirabai who was an ardent devotee of Lord Krishna and dedicated her entire life to His worship. She composed and sang lyrical bhajans called Meera Bhajans. The popular legend associated with her is that with blessings of Krishna, she survived after consuming poison sent to her by her evil brother-in-law. The larger temple in the same compound is the Kumbha Shyam Temple (Varaha Temple).The pinnacle of the temple is in pyramid shape. A picture of Meerabai praying before Krishna has now been installed in the temple.

The fort and the city of Chittorgarh host the biggest Rajput festival called the "Jauhar Mela". It takes place annually on the anniversary of one of the jauhars, but no specific name has been given to it. It is generally believed that it commemorates Padmini’s jauhar, which is most famous. This festival is held primarily to commemorate the bravery of Rajput ancestors and all three jauhars which happened at Chittorgarh Fort. A huge number of Rajputs, which include the descendants of most of the princely families, hold a procession to celebrate the Jauhar. It has also become a forum to air one's views on the current political situation in the country.