Suddenly there was a stillness. The noise of the water had stopped. There was a hollowness about the place that sounded louder than the Falls even did .People awoke from their night`s sleep. They dressed and searched for the cause of the strangeness. It was unbelievable. Niagara Falls had stopped flowing. Was it the end of the world? 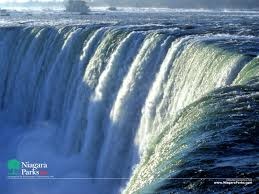 You can imagine how frightened the people were. People living within the area of Niagara Falls are used to the swirling noise of the Niagara River falling rapidly over the rocks of the Upper Rapids. The roaring sound as 1500000 gallons of water drop about 165 feet every second is deafening. But this sound is as common to the people as the ticking of a clock. In the narrow passage below, the racing water gains speed until at one narrow spot the water rushes though at fifty miles an hour. 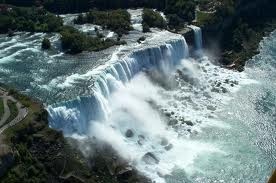 Niagara River is thirty six miles long. It is the natural way out for the 260000 square miles of water that make up four of the Great Lakes Lake Superior. Lake Michigan, Lake Huron, and lake Erie. The river drops 326 feet between Lake Erie and Lake Ontario. The drop at the Falls is about midway along the river.

During very cold winters, heavy ice covers the surface around the Falls. Water always flows, however, under the ice. It also has its deafening roar. The is such a part of beauty of the Falls that one becomes used to it and forgets about the noise.

And so it was in 1848 that the impossible happened. As usual the Great Lakes had been frozen all winter and the thaw started. Lake pieces of ice had broken away and were floating down the river. These pieces broke up into smaller pieces on the way down, crashing over the cliff and milling about in the odd whirls of the lower Gorge the lower passage way. Then the ice departed on its race to Lake Ontario. It was the usual sight with the usual noise. This March 29 was much like that of any other years. But, before the day ended, it had made history. 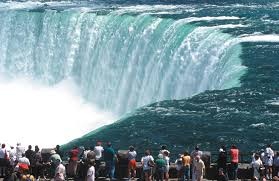 The stillness that came upon them that night drove the people almost crazy. The following day they went down into the gorge and up the other side to see what was wrong. The Falls had stopped flowing! Boulders that had never been seen before lay bar at the bottom. The uncovered river bed gave up Indian  relics. Men ,Women, and children hunted in the piles of loose rock. A regiment of soldiers even marched among the rocks. 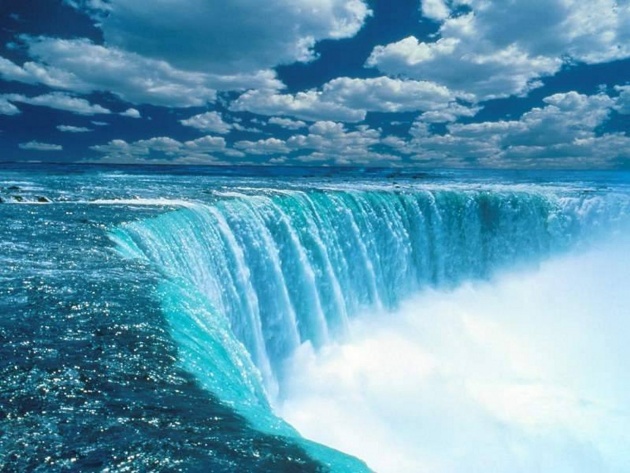 For nearly thirty hours the Falls stopped flowing. Then once more the old familiar roar was heard as ice and water came pouring along the Upper Rapids. It again poured over the great Niagara and thundered down the lower Rapids.

Why had the Falls stopped flowing?

Experts believe the Falls stopped flowing because a strong wind stopped the flow of ice where Lake Erie narrows into the river.

The wind held back the ice and jammed it solid, forming a dam of ice. It was not until there was a change in the direction of the wind, which helped to push the ice in the direction, that the Falls started flowing again.