The Interview Lands on Pay TV and in 580 Theatres 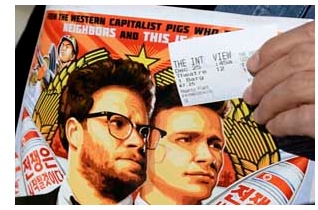 Sony Pictures Entertainment added more viewing options for its provocative comedy "The Interview," making the film available through U.S. pay television operators and nearly doubling the number of independent theaters that will show the movie.

The film, blamed for triggering a massive cyber-attack on Sony's movie studio, will also be sold through Wal-Mart Stores Inc's digital on-demand service, Vudu, and on Sony's PlayStation Network, Sony said in a statement on Wednesday.

On December 17, Sony canceled the Christmas Day release of "The Interview," a farcical story starring Seth Rogen and James Franco as journalists recruited by the CIA to kill North Korean leader Kim Jong Un, after hackers threatened violence against movie theaters and major theater chains refused to show it.

Following days of criticism from Hollywood celebrities and President Barack Obama, Sony struck deals to launch the film in 331 independent theaters and through online distributors, such as Google Inc's YouTube Movies and Google Play.

After the film earned $15 million (roughly Rs. 94 crores) from 2 million sales or rentals over four days, Apple added the movie to its iTunes store, where it ranked as the top-selling movie on Wednesday.

"The Interview" will also play in more than 580 independent theaters starting on Friday.

Over the long Christmas holiday weekend, the limited theatrical release brought in $2.8 million at the box office, as moviegoers turned out to support what they called a triumph for free speech.

The U.S. government has blamed retaliation by North Korea for the hacking of Sony in November, the most destructive cyber-attack on a company on U.S. soil. North Korea has denied that it was behind the attack.NDtv