The Making of Ode to a Post-it Note: Part 3

This post is all about the technical stuff involved in making my short stop motion hybrid animated film, Ode to a Post-it Note.  In terms of technology used to make films, I mainly still try to avoid using the computer as much as possible since I like to hand animated all my films.  Although, I use a scanner or digital SLR camera to import my drawings digitally into the computer.  From there, I usually edit with Final Cut Pro 7.

Ode To a Post-it Note combines elements of stop motion and classical animation with live action pixilation.  The entire film was shot with a Canon 40D digital SLR camera with wide angle and fisheye lenses.  Over 3500 digital photos were edited in Final Cut Pro and put together to create the final film.  There were no CGI or composited elements used in the making of the film.  The theme of the film was to keep it simple and that was done through the creation of a simple and charming story about a Post-it Note in search of its father.  I used used my actual office studio to shoot the beginning sequence in the film and appear in the film as the frantic animator who’s life is overrun with an obsession with Post-it Notes.  Notably, I'm actually addicted to using Post-it Notes and all the Post-it Notes used in the film are his real ‘to do’ lists.  As well, my actual father appears in the film during the airport scene.  78-year-old, Post-it Notes inventor, Arthur Fry had just been inducted into the Inventor’s Hall of Fame a week before he appeared in Ode To a Post-it Note.  The film was shot in Vancouver, British Columbia and St. Paul, Minnesota. Starting in Vancouver and ending in St. Paul, the film was shot in sequential order from the first scene to the last.

The main character “Post-it Note” had many stunt doubles.  At first I had created Post-it Note puppets rigged up with wires so I could animate them but in the end I scrapped them and realized more could be done easier and better using the malleability of paper through folding and manipulating the paper.  Plus you could see the wires through the thin paper.  So I used a lot of gentle folding techniques to animate the Post-it Notes.  It was a very zen-like process like making origami.  As well the removable sticky glue was a perfect way to animate the Post-it Note walking and securing to surfaces as I animated.  I never kept track but I know I used a few pads to say the least.  All the writing on the Post-it Notes was animated on Post-it Notes and shot under the camera.  So, needless to say quite a few Post-it Notes were needed for the draw animation. 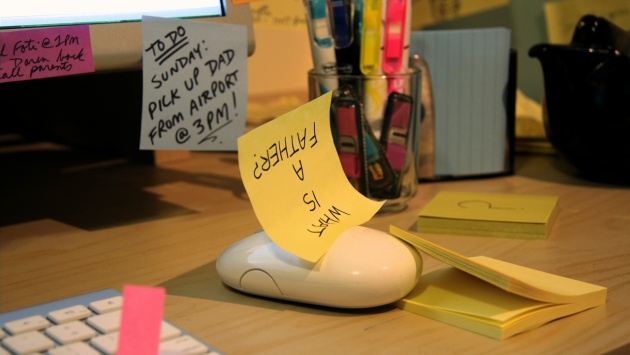 All the actors were captured using pixilation to give the same look as the live action.  I shot the entire film using 2’s…so 2 frames per photo.  The film was played back at film speed so 24 frames per second. I had to give the film a consistent look and feel with the animation and that’s how I achieved it.  When it came to shooting the actors, I would sometimes use a rapid fire shutter release to capture a series of photos in a row.  Usually about 6 photos per second.  So I would have the actors move a little slower than they normal would to achieve the animated movement.  For Art Fry, who is not an actor, I had to direct his movements like a big human puppet.  So he would move from one position to another as I called it out something like, “…look left, look right, look down…show an expression of surprise!”.  It took some time for him to get used to the movements and timing but after around 5 takes he started to nail it.  I was also able to manipulate the photos timing in the edit if it were too slow.

Thus, Ode to a Post-it Note combines three forms of animation.  Stop motion, pixilation, and classical animation.  Stop motion involves animating objects.  Pixilation involves animating people, and classical animation is drawn animation on paper. Over 3500 photos were used in the making of the film but over 50,000 photos were taken to edit the film.  It takes 12 drawings and 12 movements of an object to create 1 second of animation. 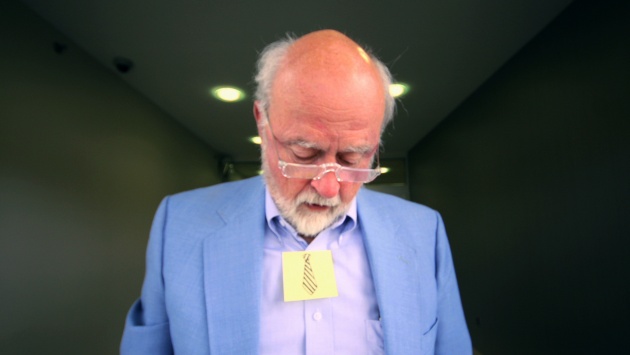