The Racoon family is not a large one, but it's so variedly that you might wonder what all the animals have in common.

Racoons live only in America and in Asia. They vary from the long-tailed, long-nosed coati to the large, bear-like giant panda. Like the bears, to which they are distantly related, raccoons walk on the soles of their feet. Each foot has five toes, with a sharp claw on each toe.

Most members of the raccoon family climb as well. They usually make their homes in hollow trees, but sometimes they use rocks and caves as dens. Many raccoons are nocturnal-that is, they are only active at night. They sleep in their dens and hollow trees during the day. Although raccoons are meat-eaters, most of them also eat plants and berries. 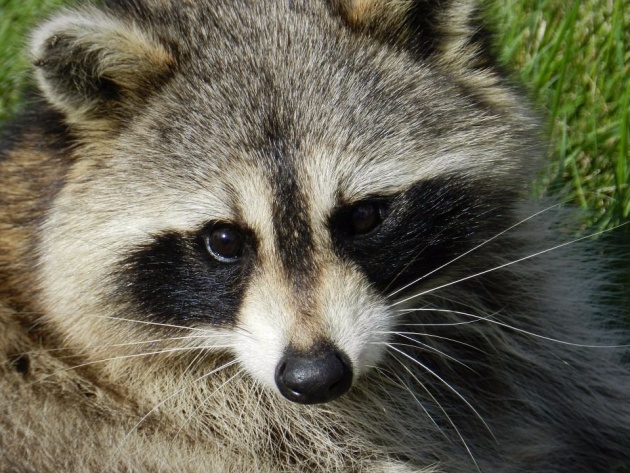 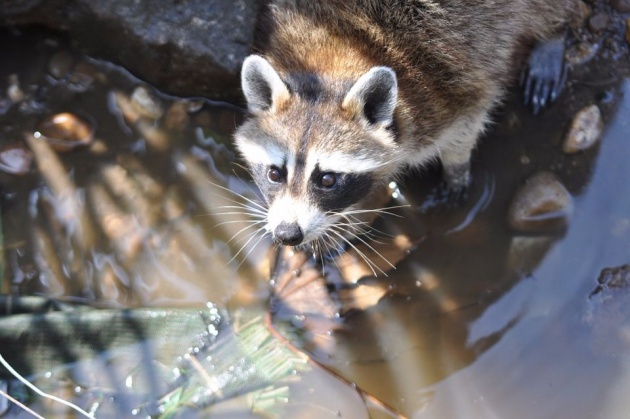 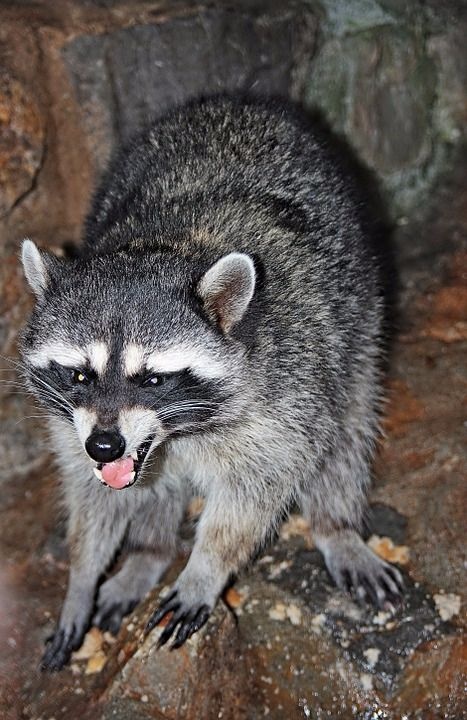 The common raccoon is found in North America.

Four kinds of raccoons live in Americas. They vary widely in looks but are small animals with long- ringed tails and sharp teeth.

There are three extant species of raccoon.

Procyon lotor is one of the most familiar species and is known ass the "common raccoon," the north American raccoon, the northern raccoon, or even simply as "the raccoon," since the two other raccoon species in the genus are native only to the tropics and are considerably lesser-known. The common raccoon has a natural range from southern Canda to Panama and has been introduced to continental Europe. It has been knowing to live in the city in addition to the wild.

P.canrivorus, the tropical "crab-eating raccoon, " ranges from Costa Rica through most areas of South America east of the Andes down to northern Argentina and Uruguay.

P. pygmaeus, the "Cozumel Island raccoon," is as much rarer species than the other two. It is native to Cozumel Island off the Atlantic coast of Yucatan.

The third edition of D.E. Wilson and D.M. Reeder's Mammal Species of the World: A Taxonomic and Geographic Reference (2005) list of three species as the only distinct extant species of the genus Procyon. Some raccoons once considered separate species are now thought to be the same as or subspecies of the common raccoon, including Barbados raccoon (P.gloveralleni), Nassau raccoon (P. maynardi), Guadalupe raccoon (P.minor), and Tres Marias raccoon (P. insularis). Procyon brachyurus WIEGMANN, 1837 was described from captive specimens; its identity is undeterminable as the remains of the two animals assigned to this taxon cannot be located anymore and may have been lost.

You may have seen pictures Davy Crockett of, the famous hunter, and scout from Tennessee. His 'coonskin' cap was made from the fur of this harmless little creature.

The common raccoon has a brown-gray coat and long bushy tail with dark rings around it. It's pointed face has dark patches around the eyes, like a mask.

Raccoons are the best known North American mammal and are found throughout the continent. They usually live in wooded areas, where they make their homes high up in hollow trees. In colder areas, they sleep during the worst winter weather and leave the nest only when it gets warmer.

Common raccoons have very sensitive 'fingers'. in fact, their name probably comes from an American Indian word meaning 'feeler' or 'hand scratcher'. With their hand-like front feet, raccoons feel inside hollow logs for insects and in streams for fish. If they are near water, they carefully 'wash' their foods before eating it. Raccoons are easily tamed and they make playful household pets. 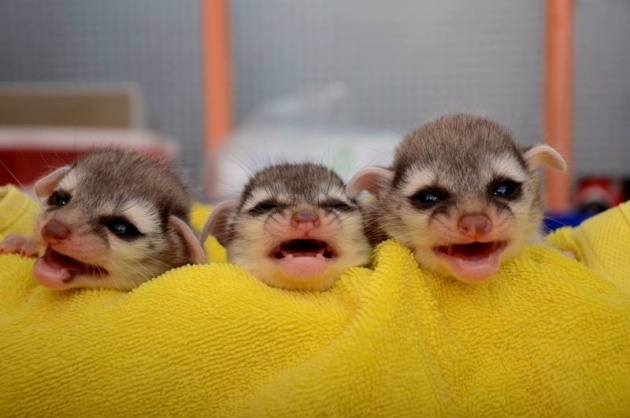 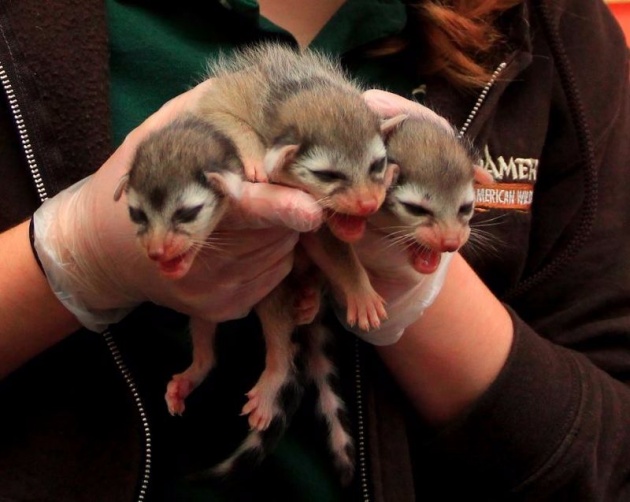 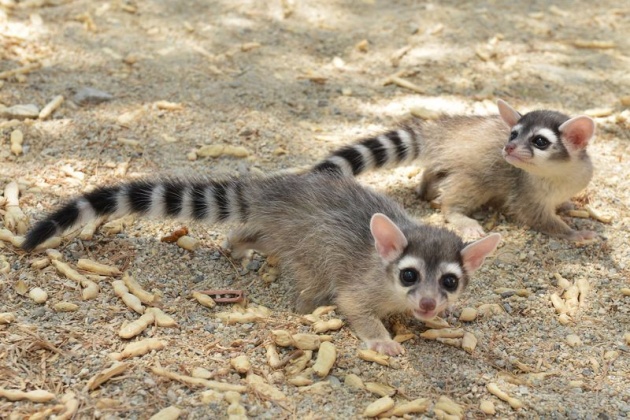 A litter of ring-tailed cats. These members of the raccoon family spend the day sleeping and come out of their holes at night to hunt for food.

The cacomistle, or ring-tailed cat, is another attractive kind of raccoon. Grey brown in color, it has a small head, large ears, big round eyes and long, sensitive whiskers. It is much less heavily built than the raccoon.

The cacomistle lives in rocky, wooded country in Mexico and the southwestern United States. It climbs well and spends as much time in the trees as it does on the ground. Its long tail helps it to keep its balance as it climbs.

During the day, the cacomistle sleeps n a hole in a tree, or in a cave in the rocks. At night it feeds on small mammals, birds, insects, and fruits. Unlike their cousins, the raccoons, cacomistles are savage animals.

These animals are at home on the ground or in the trees. On the ground they move with an odd, rolling run, their long thin tails stuck stiffly in the air. They also have long claws and large teeth and can be fierce fighters.

Coatis hunt by day. They travel in groups searching for insects and small mammals. Sometimes they will poke their long noses into insects' nest to get at their prey more easily. The will also climb trees to look for fruit.

At night coatis sleep in rough nests in the trees. The females also build nests in which they rear their young.

Kinkajous live in the forests of South and Central America, ranging from Mexico to Brazil. Their yellow-brown fur blends well with the trees in which they spend all their lives.

The kinkajou is about 1 foot (30 centimeters) long, with a tail one-and-a-half-times ass long as its body. The kinkajou often uses its tail as a fifth hand to hold food. When climbing, it wraps its tail around a branch, leaving its feet free. In this way, it can hang from a branch and climb up its own tail.

Kinkajous hunt by the night. Their large eyes help them to see in the dark as they search the trees for insects, birds, small mammals, and fruits.

For such small animals, kinkajous have very loud voices. Their piercing screams can be heard up to 1,100 yards (1 kilometer) away.

Like this animal namesake, those born under the sign of raccoon are smart, adventurous, and determined to get what they want. Bordering on stubborn, a raccoon will not give up on what it has set its signs on, regardless of the challenge presented. This is a sign that combines natural luck, optimism, and hard work together to achieve great things in life. The irony is that they also spiritually advanced enough to realize that the true success in life means more than money and power. Many raccoons may live relatively simple but happy lives. What they really want is to achieve the goals that matter to them, to live happily with friends and family, to have some adventure in their lives, and to hopefully make a positive difference in the world.

In the animal kingdom, the raccoon is often portrayed as a thief, scavenger, or pesky opportunist, but this is not a fair portrayal. These creatures merely are willing to do what they need to get without any hesitation or emotional attachment. Similarly, those born under the sign of the raccoon are less concerned with sparing or hurting feelings that they are with doing what they need to do. Unlike some other signs, they don't let their emotions get in the way of moving forward. They don't need to spend a lot of time making decisions; their optimistic attitude keeps them going through good times and bad. In fact, raccoons are often at their best in crisis or under pressure, Rather than buckling under the weight of a challenge, members of this sign happily rise to the opportunity for a new experience.

The olingo looks very like the kinkajou and lives in the same regions, but its face is more pointed. The main difference between the two animals is in the tail. The olingo's tail; although long, cannot grasp branches and other objects. It merely helps to balance the animal.

The olingo is a rare animal, and scientists do not know much about it.

Helgen began his detective work in pursuit of the new species when he set out about a decade ago to a comprehensive study of olingos.

Behind the scenes of the Chicago Field Museum in 2003, he remembers pulling out the drawer of skins and skulls that didn't look like any animal he has ever seen before, or that he had been reported by zoologists. The teeth and skull were smaller and shaped differently than olingos, and the coat was denser. Records indicated to Helgen that such specimen came from the northern Andes about 5,000 to 9,000 feet above the sea level, which is much larger than olingo habitats.

Helgen and colleagues worked with Miguel Pinto, a zoologist in Ecuador, who has shot a few seconds of video that appeared to depict the animal.

They teamed up n Ecuador in 2006, using the Pinto's knowledge of cloud forest habitats to pick the best spots to investigate. Cloud forests are "cloaked in fog." Helgen said.

On their very first night on the pursuit, the team found a real, living olinguito.

Seeing the fluffy tree-dweller for the first time, Helgen felt "sheer elation, just incredible excitement but at the same time almost disbelief. This animal had been missed by everyone."

Even people who live in the Andes had the same confusion about olinguitos being olingos, because humans don't hunt them and the creatures stay in the trees," Helgen said. 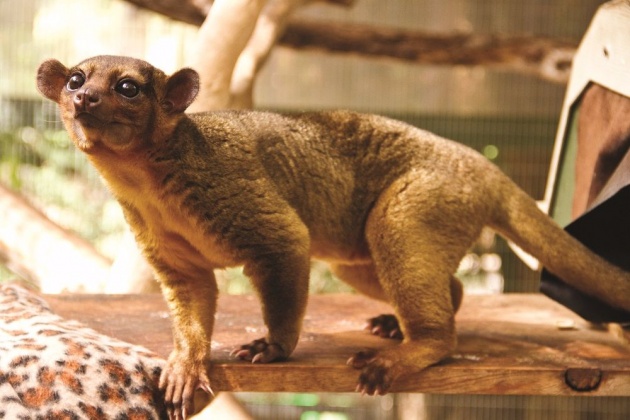 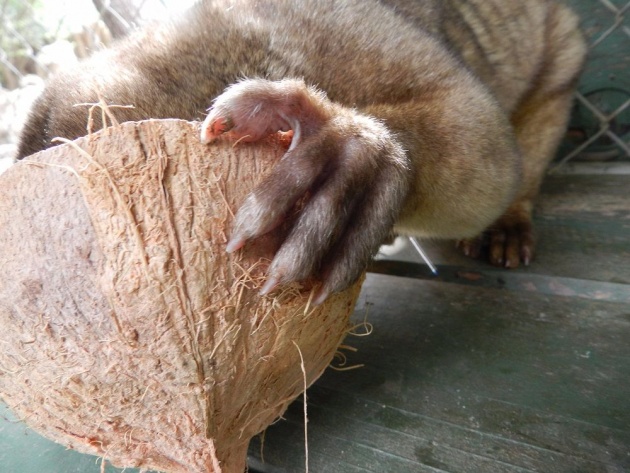 The kinkajou has a long tail which it uses to hang from trees and hold foods.

Two members of the raccoon family live in ASIA: lesser panda the and the giant panda. Scientists know that they are raccoons from the way their bodies are made. But they do not look like their North American cousins. in fact, for many years, the giant panda was thought to be a bear.

The lesser panda is sometimes called the cat-bear. It has a thick, glossy, red-brown coat that shades to black on its legs and stomach. Its face is white with black marks by its eyes.

Lesser pandas spend most of their lives in the trees of the Himalayan forests. During the day they sleep. Each morning and evening the parents and their young search for bamboo shoots, eggs, fruit and small birds. 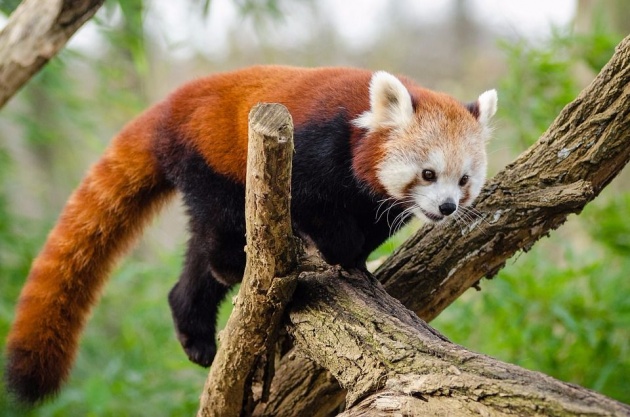 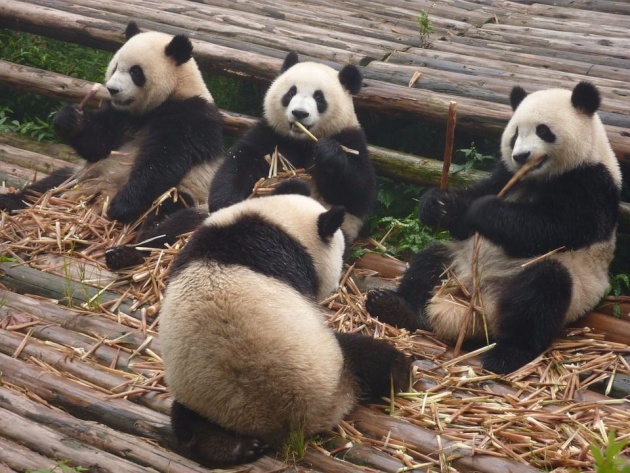 The lesser panda (above) lives mainly in trees. The giant panda (below) usually eats bamboo shoots.

The giant panda is one of the rarest animals in the world. It is also the largest member of the raccoon family. It can reach a length of 6 feet (1.8 meters) and weigh up to 300 pounds (136 kilograms). It is covered with thick, white fur but has black ears, legs, shoulders and eye patches.

Giant pandas, unknown to the western world before the 1700s, inhabit the bamboo forests of eastern Tibet and south western China. They live nearly all their lives on the ground and appear to feed mainly on bamboo shoots. Because these animals eat hardly any meat, some scientists think they are more closely related to bears than to raccoons.

Experts believe that there may be only a few hundred giant pandas left in the world. In recent years a number of giant pandas have been killed by earthquakes or have died of starvation. Scientists are studying them in the wild and learning more about their diet in order to help them survive.