The Real Story of EDWARD VI 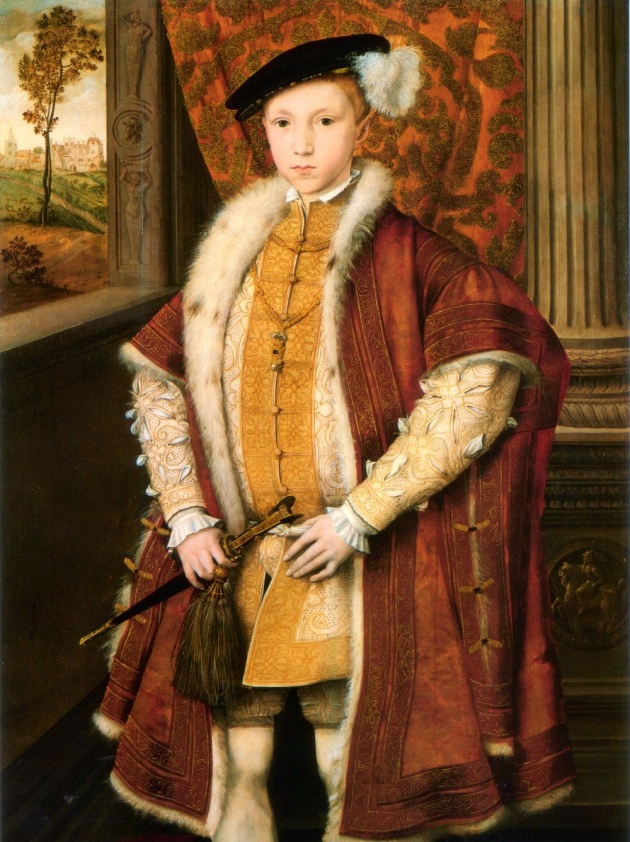 The words are spare and factual: “The Duke of Somerset had his head cut off upon Tower Hill between eight and nine o’clock in the morning.” Blunt, uncompromising, these are not the words of masterful Henry VIII but were written by Henry’s 14-year-old son and heir, Edward VI, in 1552.
Somerset was Edward’s uncle. The boy had known him all his life; for a time the duke was the boy king’s protector, governor and mentor. There was a connection of blood between them – yet there is not one speck of emotion in Edward’s words. He might have been recording the execution of a perfect stranger. Edward’s reign was short. He was nine years old when he became king, on the death of his father in 1547; he died in 1553, a few months short of his 16th birthday, leaving England with a tangled and contested royal succession and a controversial Protestant church.
Though one of the most elusive kings in the history of England, Edward has been saddled with all kinds of reputations. Probably the most familiar (for which there is no evidence) is that he was weak and sickly, never likely to survive to manhood. Another is that he was a puppet, manipulated by powerful men. A third is that he was a precocious and brilliant intellectual. Less common today is the view that he was Protestant England’s hero in its ﬁght against the pope and the Catholic church. 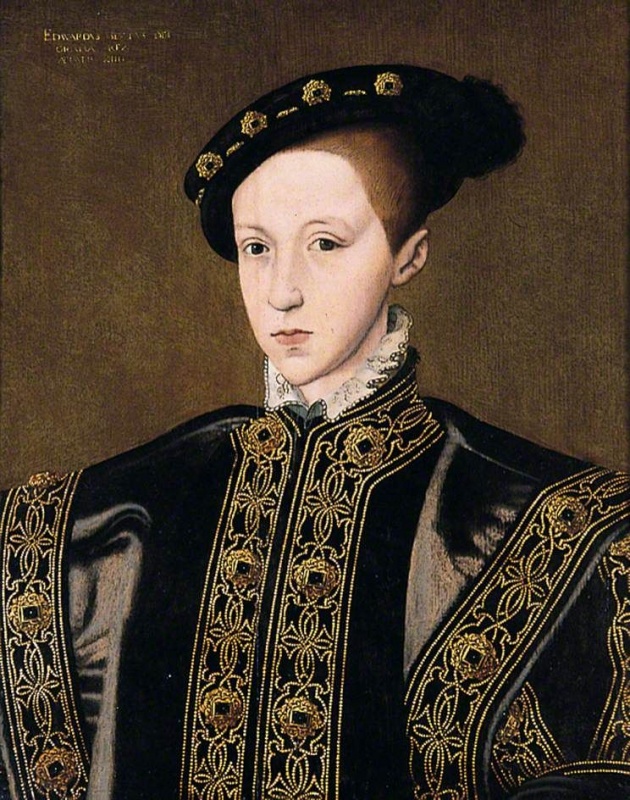 Here we have half-truths and fantasies. So who was the real Edward? Can we get close to understanding his life and world without falling for an over-simpliﬁed stereotype or a piece of religious propaganda? What evidence do we have? And what is the point of bothering? Overshadowed by his predecessor and successors – the magniﬁcent bulk of Henry VIII, apparently brutal ‘Bloody Mary’ and extraordinary Elizabeth – England’s last boy king perhaps looks, on ﬁrst inspection, pretty insubstantial.
But Edward was England’s great unﬁnished king. He was an experiment in Protestant monarchy, the model against which his sister Elizabeth was later judged – and found wanting. He died a work still in progress. What evidence we have points to a king whose ability, vision and ambition would, with time, have matched those of his father.

BORN TO RULE:
All but one of the Tudors were accidental monarchs. Henry VII, Edward’s grandfather, was a usurper, while three inherited the throne only because a sibling died. Edward was the single exception. He was born to rule: that his status was unimpeachable explains a lot about the young king and those who served him. Perhaps Henry VIII remembered how, as a boy, he’d been carefully protected after the death of his elder brother, Arthur, in 1502. He knew what it was like to have a heavy weight of expectation resting upon young shoulders.
When Henry’s third consort, Jane Seymour, gave birth to Edward in 1537, Henry’s strenuous and revolutionary efforts to secure a male royal succession were over at long last. Without the slightest compunction he put aside Princess Mary (born in 1516) and Princess Elizabeth (1533). Both were declared illegitimate by parliament and cut out of the succession, the latter situation reversed only in the ﬁnal years of Henry’s life.
From 1537 till his death, Henry threw his all into preparing for the throne the prince he called his and England’s “precious jewel”. Like any infant prince, Edward lived apart from his father and family. He had his own household, which moved between palaces and royal houses such as Hunsdon, Hatﬁeld and Tittenhanger. Sometimes he spent time with his sisters, sometimes with Henry and his then queen, Katherine Parr. By the age of seven he was practicing Latin grammar and composition by writing to all of his family, as well as to his godfather, Thomas Cranmer, archbishop of Canterbury, who was a hugely important inﬂuence throughout his life. 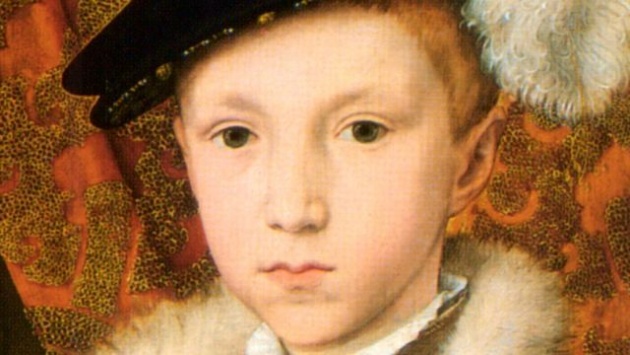 From a very early age, Edward felt the weight of duty. Portraits of the prince – from Hans Holbein the Younger’s infant Edward, produced in 1538, to a full-length painting of 1546 – proclaimed him as his father’s son and heir. The latter, echoing Holbein’s famous (now lost) depiction of Henry VIII, shows Prince Edward, at eight or nine years old, facing the viewer as king-in-waiting. As Edward wrote to Katherine Parr: “I pray God I may be able in part to satisfy the good expectation of the king’s majesty, my father, and of your grace.”
Henry had been taught grammar, poetry, rhetoric, ethics and history, and believed absolutely in his own intellectual abilities. In his boyhood he had met the greatest scholar of the age, Erasmus of Rotterdam, and Henry and Katherine made sure that his heir and successor had the best kind of Erasmian education: the learning of a philosopher prince and an enlightened ruler.
Edward was taught by two Cambridge scholars, Richard Cox and John Cheke, who gave him a formidable grounding in Latin and Greek grammar. He read the books of ancient Greek and Roman orators and writers. He was trained in rhetoric (the art in public speaking of testing and presenting an argument and entertaining and persuading an audience), mathematics, French and theology. Like the young Prince Henry, Edward spoke French and Italian, and probably read some Spanish. Father and son shared a passion for astronomy.
Henry VIII found writing tedious and painful (making an important exception composing his love letters to Anne Boleyn). Perhaps Edward disliked writing, too: certainly, his handwriting was never as elegant or easy as his sister Princess Elizabeth’s. Still, he had no choice but to write.
Translated from their original Latin, Edward’s letters can sound formal, remote, moralistic, pompous and priggish. But this is hardly a surprise. They were really exercises in formal composition, in which virtue –  a word that appears over and over again –  was deeply embedded.

CHRONICLE OF YOUTH:
Probably a much fairer guide to Edward’s mind and interests is his ‘Chronicle’. He began writing it in English soon after he became king, but took it up with greater energy in 1551, when he was 13, perhaps under the supervision of John Cheke. The ‘Chronicle’ is a magpie jumble of facts and events in Edward’s life and in the activity of his royal court and government – an organisational hotchpotch. Here, with all of its boyish untidiness and disorder, we get as close as we can to the real Edward. 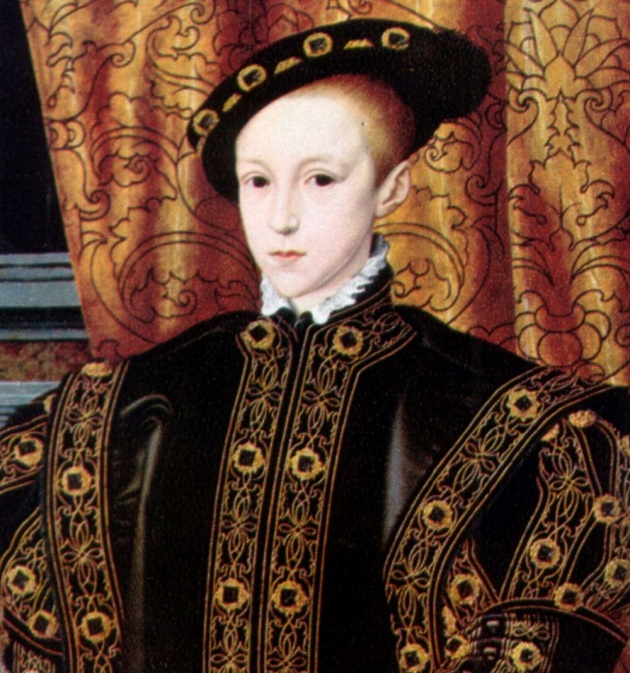 The ‘Chronicle’ was not a kind of confessional. That bloodless entry recounting the execution of the Duke of Somerset reads as callous and cold-hearted, but as a king Edward was expected, even in private, to hide feelings and emotions behind a mask of royalty.
The political world of Tudor England in the 1540s and 1550s was not an easy one to navigate – not for Edward, nor for the men who governed in his name. When Henry VIII died leaving a nine-year-old heir, it was perfectly obvious that Edward could  not rule for himself. But two things  made his royal minority particularly controversial. The ﬁrst was the successful effort of the elder of Edward’s two maternal uncles to appropriate kingly power. This was Edward Seymour, Earl of Hertford and Duke of Somerset. He was Henry VIII’s brother-in-law – and the man whose execution in 1552 was so unsentimentally described by Edward. The second was the startling speed and intensity of the full-scale Protestant Reformation that swept away Catholic worship in Edward’s kingdom, done in the king’s name but really the vision of Archbishop Cranmer of Canterbury.
It is easy to see Edward as the pawn of powerful men. Early in his reign, certainly, he was manipulated by Thomas Seymour (his other uncle) in the latter’s tussle for power with the Duke of Somerset. In a printed pamphlet directed at rebels involved in uprisings in 1549, Edward wrote: “Rule we will, because God hath willed: it is as great a fault in us, not to rule, as in a subject not to obey.” This was a case of simple ventriloquism: Edward’s words were scripted for him. When Somerset’s authority collapsed later that same year, the duke seized the king and used him to try to face down his opponents in the king’s council.
But no one doubted that Edward would one day be a king, full and complete in his powers. And all the time he was growing up. By the time he was 14, the young king had moved a step closer to meaningful rule. He was briefed by his advisers, and he wrote papers on subjects that interested him, such as military campaigns and the reform of the currency.
It would be going much too far to say that Edward was now in charge, but the balance of his court and government was shifting. A 14-year-old king, after all, is quite a different  proposition from a nine-year-old prince. What Edward certainly possessed by 1551 was a powerful sense of self. When his lord chancellor refused to accept a document signed by the king because it had not been countersigned by his advisers, Edward’s reaction was forceful and sharp. “It should be a great impediment for me to send to all my council,” he wrote, “and I should seem to be in bondage.” At 14, those words had something still of fantasy about them: four years later they would have been uncompromisingly ﬁnal. There is an echo here of the magisterial Henry. 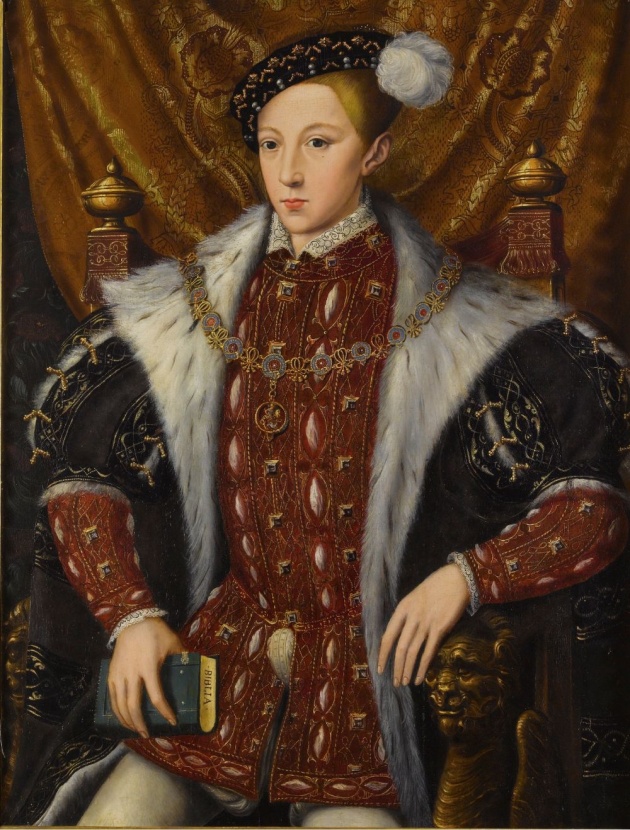 Like his father, Edward VI believed in the powers of a king to dispose of the crown in the way he felt was necessary. In the spring months of 1553, when Edward was dying – from a rapid and fatal disease of the lungs – he wrote a ‘Devise’ for the royal succession. This ‘Devise’ is the most perplexing document of Edward’s reign: it seems like a last, confusing trick played on historians by the elusive young king.
When Henry VIII died he had left a clear mechanism for the succession: if Edward died without a legitimate heir, his elder sister, Mary, would inherit the throne. If Mary died without a legitimate heir, Elizabeth would be queen. Even in death, Henry controlled the Tudor line. But his son refused to be outdone. Edward insisted with some force that the entire political and judicial establishment should sign up to the ‘Devise’, ignoring the lawful claims ﬁrst of Mary and then of Elizabeth (both of whom were, in Edward’s eyes, illegitimate – and one of them, Mary, a Catholic and, thus, offensive). Instead, his proposals would place on the throne his blood kinswoman Lady Jane Grey. What happened on Edward’s death is one of the most dramatic stories of English history: in the absence of a law passed by parliament, and facing the forces of a surprisingly decisive Mary, Jane Grey’s supporters crumbled. One of Edward’s legacies was disgrace and execution for some of his closest allies and supporters. Like his father, however, Edward never let sentiment stand in the way of his kingly authority. Even at the age of 15, he made clear his voice and his will – and he expected his people to obey him.