The Stylish Side – Exploring Fashion in Afghanistan

This post is dedicated to Afghan women’s current dress code and fashion. To all those who remember that we are women and have the option to explore variety of styles and fashions :) 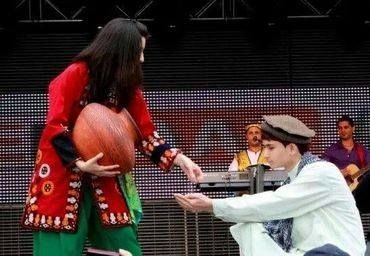 Some might think why I write about Afghan women’s dress code? Why not politics or women’s rights?

Well, here is the reason.  I tell you what; because I am surprised more than any other time in my life to look at so much fashion and style ( practiced and talked about) going on in Afghanistan.

I am surprised to see that there is more hair coloring and stylish dresses in Afghanistan rather than in the U.S. I saw some girls who had their hair colors in black and dark blue, in light blue, and even more colors. The long and thick braided hair of one of the girls I saw with such bright color (half blue) makes me think of where else I can see such a style?

In fact, nowhere. this is only in the city of Herat. Let alone talk about other cities.

I am also astonished to see that how women and girls pay more attention to wear proper dresses than in the U.S. In fact, life in Afghanistan is not less busier than in the US. However, I rarely can make a time out of my busy schedule to go to the saloon, or go to fashion stores for buying fashionable clothes and stylish shoes. But it is exactly what I found interesting.

Do I work  more than my fellow Afghans at home? NO. Not at all. They probably work much harder than me. They carry the double burden of work in the life. They work outside, they work at home. They take care of kids and elder, and they also take care of everything else in the house. Still, they follow the schedule for going to the saloon, take care of themselves and keep themselves update with the fashion news. In fact, I really admire that many Afghan women whom I met – much busier than me, have a proper schedule for when to go for cutting their hair, plucking their eyebrows, and thread their faces.

I found it amazing that many of my friends there told me how long my dresses look like. How I do not look to have any American style at all :D

Well, here is the thing. I finally dyed my hair – the closest color to my original hair color. Does that mean I look more stylish now? let me quote a few of my friends’ statements here:

An American friend told me: “wow, this is so great! I liked it.”

Another American friend: “wow, now I believe that you are Americanized.” And I was surprised to hear that asking her back if I was not Americanized before? She gave me a big grin and said, “well, you are more Americanized now.”

An Afghan friend at first passed by me, then returned and told me: “I thought it is not you. It was not like an Afghan.”

A Pakistani friend told me: “oh, I saw you and was thinking who is this girl so similar to you?”

Another Afghan friend told  me: “I did not say hi because I thought you are an American.”

And one more Afghan friend told me: “I make no comment about people’s appearance. :)

So, I concluded that: dying hair in Afghanistan does not make you more American. Such as one of my friends who came to the US three years ago, who had dyed her hair and was looking a ‘culturally defined representative Afghan girl!’

However, dying hair in the US makes you look more Americanized in the eyes of some of your Afghan or American friends, (and perhaps a person who has forgotten about her culture) because apparently there is no hair dying in Afghanistan.