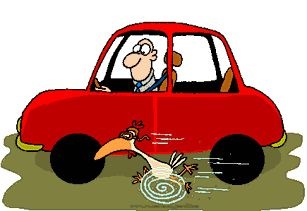 Juan was driving down a country lane in his truck when suddenly a chicken darted into the road in front of him. He slammed on his brakes, but realized that the chicken was speeding off down the road at about 30 miles an hour. Intrigued, he tried to follow the bird with his truck, but he couldn't catch up to the accelerating chicken. Seeing it turn into a small farm, Juan followed it.

The farmer came out of his house, and Juan said, "Three-legged chickens? That's astonishing!"

The farmer replied, "Yes. I breard them that way because I love drumsticks.

Juan was curious. "How does a three-legged chicken taste?"

The farmer smiled. "I don't know, I haven't been able to catch one yet."