TOMBSTONE (GUNFIGHT AT THE OK CORRAL)

The bustling new town of Tombstone, Arizona, was ﬂooded with the sounds of gunﬁre for just 30 seconds on 26 October 1881 – but the cracks of the 30 shots ﬁred would echo through history as one of the Old West’s most iconic moments. 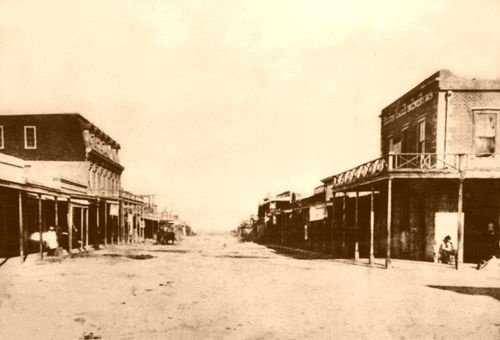 The shoot-out at the OK Corral  – between ﬁve members of the outlaw band known as the Cowboys, three of whom died, and the lawmen Wyatt Earp, his brothers Virgil and Morgan, and Doc Holliday – has been immortalised in several ﬁlms, most famously Tombstone 1993. In nearly all depictions of the shoot-out – including the daily  re-enactment staged to delight tourists in the town today – the Earps are the noble enforcers of law and order, while the Cowboys are violent thieves and murderers who get what they deserve. e truth of the OK Corral gunﬁght, however, is far more complex.

CLASH WITH COWBOYS:
The opening narration of Tombstone introduces the Cowboys, a ruthless brotherhood of cattle-rustlers and killers who can be identiﬁed by their red sashes. e Cowboys did exist – they were thought to number more than 200 – but they were not the organised band portrayed in the ﬁlm. Rather, they worked in small groups to commit petty crimes, and there is no evidence that they wore red sashes.
Wyatt, Virgil, Morgan, James and Warren Earp (the latter two don’t feature in Tombstone and took no part in the gunﬁght) moved to the silver-mining community around 1879 seeking fortune. They were soon joined by John Henry ‘Doc’ Holliday, who hoped that the warm weather would help ease the tuberculosis from which he suffered.
For two years, the Earp brothers habitually clashed with the Cowboys. When Virgil was made town marshall in June 1881, tensions between the Earps and the Cowboys rose. Shortly before Virgil took the job, the town council passed the controversial Ordinance Number 9, which required all weapons  to be handed over in the city limits – a rule that Virgil strictly adhered to. 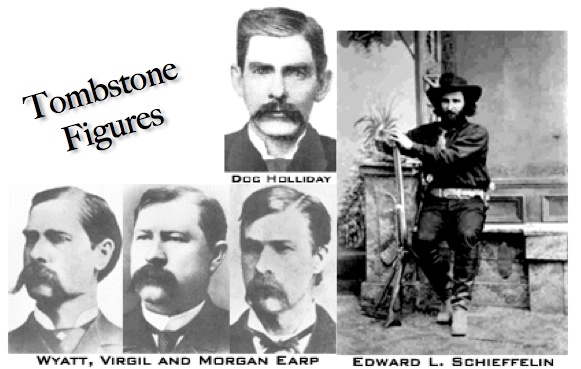 The Earps attempted to arrest Cowboys for a variety of crimes ranging from stagecoach robberies to murder, while at the same time bending the laws to suit their own business interests in town. Both sides were culpable of dodgy dealings and illegal behaviour, but the Earps’ image has been protected – mainly because they were the ones wearing the tin stars of law enforcement. Wyatt, in contrast with his reputation as the legendary lawman of Tombstone, had previously been a gambler, saloon owner and pimp as well as a law enforcer in other towns, and was cultivating similar opportunities in Tombstone. He was also at loggerheads with Cochise County Sheri Johnny Behan over a woman, Josephine Marcus, despite being married himself.

30 SECONDS, THREE DEAD:
At around 3pm on 26 October 1881, the tension boiled over. at morning, Virgil and Wyatt had each pistol-whipped a Cowboy in the face of threats to their lives, notably from another Cowboy, Ike Clanton. By the afternoon, Virgil was concerned that the Cowboys in town hadn’t given up their ﬁrearms, so he collected a shotgun and rounded up Wyatt, Morgan and Doc, now all deputised as lawmen. Together they walked to the small lot near the OK Corral to confront and disarm Ike and Billy Clanton, Tom and Frank McLaury, and Billy Claiborne, who were allegedly scheming to kill Doc and the Earps.

The two groups were standing only two or three metres apart when the shooting started. Who shot ﬁrst is unclear, but straight away Frank McLaury was hit in the belly by a bullet from Wyatt. Doc blasted Frank’s brother Tom in the chest with a shotgun, which he then discarded for his favourite nickel-plated revolver to ﬁnish of Frank with a shot to the head. Morgan was injured by a single bullet that struck both shoulder blades and his spine, but he continued ﬁring, as did Virgil, who picked up a wound in the calf. The third Cowboy fatality, Billy Clanton, was shot multiple times, while his brother Ike and Billy Claiborne ﬂed, screaming that they were unarmed. The ﬁght lasted just 30 seconds.
The headline of the following day’s Tombstone Epitaph newspaper read: “Three men hurled into eternity in the duration of a moment.” The folk of Tombstone were initially on the side of the Earps, but the Clantons and McLaurys were popular, and some 2,000 people watched the funeral procession for Billy 19, Tom 28 and Frank 33.

RIDING FOR REVENGE:
Films such as Tombstone generally depict Wyatt as the central hero ﬁgure. His name is the best known of the men involved in the gunﬁght and has become synonymous with frontier justice and integrity. That reputation came not from what happened at the OK Corral, but from subsequent events. The Earp brothers and Doc were arrested for murdering the three men and it was only after a month-long hearing – during which Wyatt and Doc spent 16 nights in jail – that they were cleared. 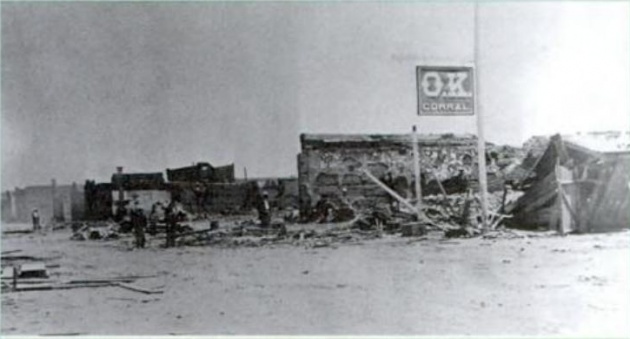 Late on the evening of 28 December 1881, Virgil was ambushed on a Tombstone street by shooters hiding in a nearby building. He lost the use of his arm, but his assailants escaped arrest even though he was able to identify them. Nearly three months later Morgan was shot in the back and killed while playing billiards. When the perpetrators were again not prosecuted, Wyatt turned his back on the legal system and formed a posse. From 20 March to 15 April, with Doc riding alongside him, Wyatt pursued the men responsible. In Tombstone, this ‘vendetta ride’ is portrayed as almost a one-man war against the Cowboys in which dozens are gunned down and the criminal gang is crippled, with Wyatt frantic to kill the leader, Johnny Ringo. In reality, Earp’s posse killed just four men. His was not a noble crusade for justice but a personal vendetta.
Wyatt’s quest for vengeance is the reason he gets top billing in any account of the events that took place in Tombstone. His reputation kept growing, especially after the publication of Wyatt Earp: Frontier Marshall, written by Stuart Lake with Wyatt’s collaboration shortly before his death in 1929. In the book, the Clantons and McLaurys are the bad guys while the Earps represent true bastions of frontier justice – an image that suited
Hollywood ﬁlms perfectly. Wyatt became a hero, played by the likes of Henry Fonda, Burt Lancaster and Tombstone’s Kurt Russell, and the story has been told in a variety of romanticised interpretations. Tombstone is a thrilling ﬁlm, with a scene-stealing performance by Val Kilmer as Doc, but it is certainly a melodramatic telling of the tale.
We’re still waiting for a historically accurate version of what happened, but a small bronze plaque in Tombstone attempts to show the Cowboys as something more than just the bad guys.  It is dedicated not to the Earps or Doc but to the dead McLaurys, and reads: “One owes respect to the living, but to the dead one owes nothing but the truth.”