Top 10 Fantastic Roads In the world 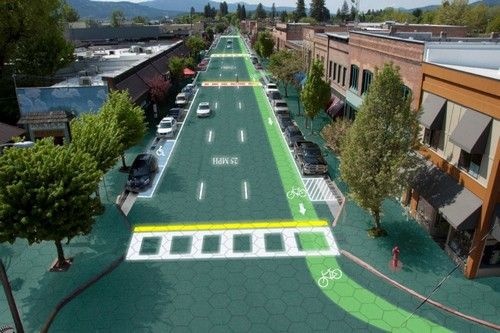 Fantastic Roads. They are indispensable to the modern world. The American Road & Transportation Builders Association estimates there are over four million miles of road in the U.S. alone. There are roads on all seven continents (yes, even Antarctica), under the ocean, and which go nowhere at all.

Out of all of those miles of roadway in the world, here are ten that are particularly fascinating.

10. The Oldest Road in the World

England’s “Sweet Track” is known by many as the oldest road in the world. Though it is quite probable that there were roads that predated this one, none of them have been discovered, leaving this with the title. It may not have been nearly as impressive as the Roman roads that united four continents, but it is the first example of a deliberately constructed road.

The Sweet Track was an elevated pathway crossing a bog near modern day Somerset, England. Approximately 6,000 years old, cross beams sunk into the peat served to lift a wooden platform above the marsh, running roughly a mile in length. The anaerobic conditions of the soil and water preserved the wooden walkway after it collapsed, allowing us to find and date it.

9. The Most Famous Road in the World

Originally a footpath on Long Island created by First Nation tribes, Broadway quickly became the most important road in Nieuw Amsterdam. Though much of its length is more or less just another (major) part of New York’s transportation system, in Midtown Manhattan Broadway is one of the most significant cultural hubs in the world. Known as the Great White Way, Broadway has brought us culturally significant plays and musicals such as Rent and Miss Saigon, and stars like Maryl Streep and Jerry Orbach.

8. The Most Dangerous Road in the World

Yungas Road in Bolivia is so dangerous it is known as “Death Road.” Much of it is slick wet mud, carved out of the side of mountains, with half mile drops. Oh, and no guard rails. A friend of mine actually survived traveling it. According to her, “it is the most beautiful, terrifying experience that I’ve ever had”. Full sized tour buses use this road and can pass one another comfortably on the straightaways. Corners, however are a whole other, horrifying, beast. At one point an attempt to negotiate a corner and meeting another bus had resulted in hers having the outside driver’s wheel hanging out in the air by three feet.

With 200-300 fatalities a year this road well earns its frightening reputation. However the amazing views and sense of adventure this road brings to the traveler’s schedule means that it continues to be a road that draws people in and extracts a deadly toll.

7. The Longest Road in the World

In the board game “Settlers of Catan”, one strategy that can be particularly crucial for winning the game includes building the longest road. In the real world the winner of that particular gem would be the Americas. Starting in Deadhorse, Alaska on the Arctic Sea and running down to Ushuaia, Argentina, by the Strait of Magellan, the Pan-American Highway stretches 30,000 miles and rolls through 14 countries. Three of them, Canada, the United States, and Argentina are in the top ten list of countries by size.

There is one small flaw in this claim, however. Owing to the Darién Gap, the road has a missing link roughly midway. A combination of high expense and environmental concerns has prevented the connection of Central America and South America at the Panama-Columbia border. Current proposals to eliminate this slight (100 miles worth) problem include a ferry that would officially be part of the road or a combination of sky bridges and tunnels that would minimize the impact of a land connection.

6. The Widest Road in the World

The eastern portions of Interstate 10 in Texas are affectionately known as the Katy Freeway. Running from Houston suburb Katy through to downtown, the high volumes of traffic in the 4th most populous city in the U.S. necessitated a significant expansion in the first decade of the century. At its widest point I-10 is 26 lanes wide, with 12 main lanes, another 8 lanes of access roads to the sides, and six lanes for high capacity vehicles in the center. The right of way for this colossus of commuter construction is a tenth of a mile wide.

I-10 in Houston includes some mind boggling structures, including a “five-level stack” Interchange. At 115 feet tall and capable of handling half a million vehicles a day, this exchange looks as though someone had dumped a plate of noodles on Houston. In a nation fond of naming massive exchanges things like the High Five (Dallas) or The Judge Harry Pregerson Interchange (L.A.), this location is known simply as The Katy Stack.

5. The Straightest Road in the World

Australia’s Eyre Highway has been described as “a long and lonely road”. Running over 1,000 miles long, one major section of it has an additional distinction to be added to the terms “long” and “lonely”. Between Caiguna Roadhouse and Balladonia Roadhouse the Eyre is 91 miles of perfectly straight boring.

Crossing the Nullarbor Plain, this road has no excuse to actually do anything but lay there. Practically a flat slab of rock there are virtually no hills to rise over, lakes to curve around, or even trees to run into when you fall asleep behind the wheel.

4. The Crookedest Road in the World

San Francisco has a road that is the ultimate opposite of the Eyre Highway. Lombard Street has so many hairpin turns in its short length people had to invent the word “Crookedest” to describe it. With eight elbows the road descends the 27% grade, 400 foot long slope of Russian Hill on a surface paved in brick and surrounded by flower beds.

Despite this famous, tourist drawing moniker, Lombard Street is not, in fact, the road with the most severe curves in the world, or even in San Francisco. (Those would be the Transfăgărășan Highway and Vermont Street). Never-the-less Lombard remains the most well-known and visited “crookedest” road in the world.

3. The Highest Road in the World

The Karakoram Highway has a number of monikers, including the Friendship Highway and the Eighth Wonder of the World. It is the only significant road linking China and Pakistan, running through Gilgit-Baltistan’s mountains and into Sinkuang Uighur. Giglit-Baltistan is part of the dispute between Pakistan and India more broadly known as the Kashmir Conflict.

What is not disputed is that this highway is the highest paved international road in the world. As it crests the Khunjerab Pass (and thereby switches between the two nations and flipflops the lanes) it tops out at an oxygen-thin 15,397 feet above sea level, nearly twice the altitude where altitude sickness becomes a common concern.

2. The Lowest Road in the World

If Karakoram is a road attempting to turn you into an oxygen starved puddle of wimp, Israel’s Highway 90 is the road to make you feel like a god. Running the length of Israel in a north-south direction, it skirts the western bank of the Dead Sea. In doing so it earns the title of “the Lowest Road in the World” by dropping to 1,400 feet below sea level. At this point 5% more oxygen is pumping through your lungs than all those muscle-bound beach bods playing in the surf in Santa Monica.

Known at this part of its travels as the Dead Sea Highway, it does have the somewhat nervous-making distinction of running through Isreali controlled portions of the West Bank. In spite of this, the road is a popular tourist destination, allowing people to travel in cars at depths usually reserved for submariners, and with better views.

1. The Smartest Road in the World

Doesn’t exist yet. But it could soon. Seeking to contribute to a greener humanity in the 21st century, several different groups are independently attempting to create the road of the future. Many of them hinge around the idea of turning the “wasted space” of eco-unfriendly asphalt and concrete roads into green-energy producing smartroads. Two such projects are Europe’sSolaRoad and North America’s Solar Roadways.

In essence, the smartest road in the world will be constructed of extremely robust solar panels. Solar Roadway’s model, for example, was lab tested by Norwich Civil Engineering professor Edwin Schmeckpeper and found to be capable of surviving the million pound “megaloads” that regularly run past Solar Roadway’s front door. Developers plan to add further features, including heat pads and LEDs, and mount the panels on a road bed with large, open conduits capable of carrying electrical and telecommunications wiring and filtration equipment to remove pollutants from runoff.