Islam is one of largest religions of the world. It provides full code of life for its followers. Muslims follow Prophet Muhammad (P.B.U.H) who is the prophet of Allah and preached Islam. Islam has five pillars. The five pillars of Islam are believing in One God (Allah) and Muhammad (P.B.U.H) as last prophet of Allah, prayer Zakat, Fast and Hajj (pilgrimage of Makkah).

Zakat is obligatory on every Muslim having certain amount of Wealth for a period of one month. Zakat plays power full role in alleviating poverty as it brings concentrated money in circulation. Many national and international organizations have put forward efforts to eliminate poverty from world but none of them could address the issue. But, Islam gives idea of Zakat and made it obligatory on every rich” Muslim, earning HALLAL MONEY”. Zakat brings total 2.5% of a man’s total concentrated wealth in economic circulation, hence, if given by every rich Muslim, it can completely eliminate poverty in at least Muslim World.

On whom Zakat Is obligatory?

As mentioned earlier zakat is made obligatory by Allah on every Muslim having certain amount of wealth concentrated for a period of one year. Zakat is paid every year and it is 2.5 percent of wealth a person has. 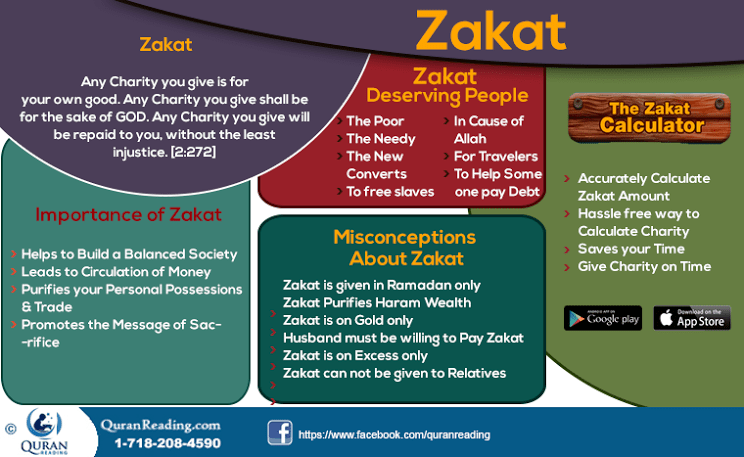 To whom Zakat is given?

The Poor Due Is Only For Those Who Are Poor And Needy And Those Who Collect It, And For Those Whose Hearts Are To Be Conciliated Towards Islam, And For The Freeing Of Slaves And For Debtors, And For Spending In The Way Of Allah And For Traveler. This Has Ben Ordained By Allah. And Allah Is Knowing, Wise.

Zakat according to verse of Quran can be given to eight types of people.

All the categories of people mentioned above directly or indirectly represent poor peoples except servants of zakat institution. Hence, zakat helps in eliminating poverty completely. Zakat is given to poor Muslims without considering cast creed and color every year. This giving does not mean helping one person in his one time or more time’s meal but it provides poor people with opportunity of establishing earning source for example a small business or help a poor man or women to get married. Zakat giving prevents money concentration in a few hands but it brings money in circulation helping in development and raising life standards. It generates sources of income. Furthermore, Zakat is paid from “Halal” in come so, it prevents exploitation of poor people by rich.

“GOD DOES NOT ACCEPT ANY ZAKAT FROM ILLEGAL RESOURCES”

So, zakat purifies the wealth and is way to please Allah. Zakat is an obligation that alleviate greed of wealth in Muslims and provide financial support to poor.

Practical example of implementing zakat system and enjoying its fruit can be taken from history of Islam. First Khalif of Islam Hazrat Abu Bakar Sadiq (R.A) stressed on collecting Islam and fought against non-payers of zakat. After full implementation of zakat system country witnessed a time when there were less people to receive zakat than the zakat payers. In this way zakat money filled country’s treasure which was used for development projects.

So, zakat is power full way to eliminate poverty in the world and making life standards better. Implementation of zakat system on national level and making it corruption free is need of hour. Proper strategies should be adopted to encourage the people to pay their due zakat. This can bring change in today’s social structure and life style.