In professional sports of wrestling, WWE is rank first among all wrestling promotions and WrestleMania always comes on top among countless pay-per-views across the globe. This is a pay-per-view that has the eyes of all the people. Large communities such as ESPN, YouTube and all sport news distributors, always discuss WrestleMania. There have been many celebrities involved in WrestleMania and thus considered as a centre of the spotlight. This year, WrestleMania 34 took place on April 8 and on this occasion, I will tell you about 10 WrestleMania matches which you must need to see.

This match happened at WrestleMania VII, in which Ultimate Warrior has competed with Randy Savage. During this time, Randy Savage was in a heel character along with his manager Queen Sherry. From a couple of days, they both use to attack Warrior during his matches and on an occasion even cost him to lose WWE Championship. Because of so much build up in their rivalry, this match is perfect on this list. This match was a retirement match in which the loser had to retire. After a fierce fight, Ultimate Warrior defeated Randy Savage. After losing, Randy Savage in the middle of the ring was shattered and at the same time Sherry came in the ring and started attacking Randy Savage. In the audience, Randy Savage`s wife and former partner Miss Elizabeth was sitting. After watching his husband`s poor condition, she jumped over the ring barrier and beaten Sherry. The couple reunited again with a magnificent emotional crowd reaction.

Now, what was so special in this match that I included this on my list? The special thing about this match was the storytelling and build up of this match. Shane Mcmahon and Vince Mcmahon started hating each other over Vince`s sexual engagements with Trish Stratus. Vince even drugged his wife Linda which resulted in the unconscious body and a mental state in the coma. He even crossed the line when he kissed Trish in front of his wife. These evil actions made Shane lose his mind. Finally, in WrestleMania X-Seven, we not only saw the battle of two McMahons but also got a chance to see a war between father and son. The drama of this match and the audience's reaction was worth seeing. Trish Stratus and Vince`s daughter Stephanie McMahon played the valuable roles in this match as well. WWE universe saw a very shocking moment when Linda McMahon get out of her wheelchair and kicked Vince between the legs. 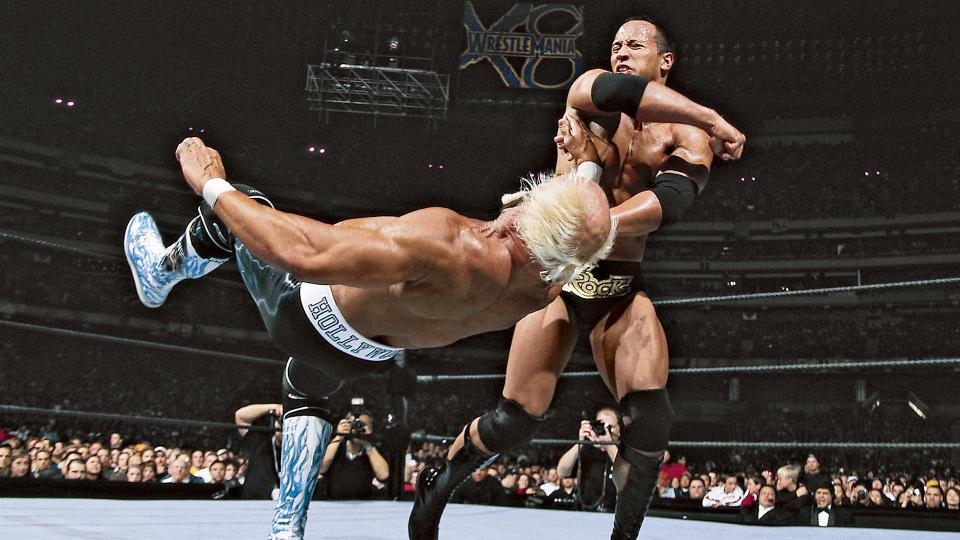 When The Rock was doing so good in WWE during early 2000, Hulk Hogan showed up with heel stable nWo. The villainous stable quickly engaged in a fight with The Rock which builds up to a match at WrestleMania X8. I put this match on this list because it is a dream Icon vs Icon match which actually happened. The Rock was playing babyface during that time against Hogan. The tables turned when WWE audience booed The Rock and cheered Hogan during this match which immediately turned Hogan into the babyface. The storyline of this match was so amazing and is fit for this list.

This match was centred with so much buzz because the special outside enforcer was Mike Tyson. On an episode of WWE Raw, Stone Cold engaged in a fight with Mike Tyson and company`s authority figures including Vince Mcmahon. During that time, Shawn Michaels was the villainous leader of stable DX and Steve Austin was a babyface. Shawn got support from Mike Tyson and later it was announced that Tyson will be special outside enforcer for WWE Championship at WrestleMania XIV`s main event. WWE universe witnessed a shocking moment when Tyson turned on Michaels by hitting a knockout punch after the match and joined forces with Steve Austin.

It was for the first time in the history of WrestleMania that the Tag Team match was going to be remembered for years. WrestleMania 2000 is known only because of this match. There was going to be first-time triangle ladder match in which the WWE Tag Team Championship was hanging over the ring. The Hardy Boyz, The Dudley Boyz and Edge and Christian were fighting in this match. A shocking scene came when the Edge delivered a Spear to hanging Jeff Hardy from a ladder.

This match is considered to be one of the best matches in WrestleMania's history. The story of this match is very interesting as it included Shawn Michaels putting his career at stake. The Undertaker, on the other hand, was betting on his WrestleMania 17-0 streak. The story behind this match is worth seeing, and the match is also awesome. Both wrestlers were not ready to give up. But, in the end, it was The Undertaker`s streak which lived.

I have put this match on this list because first time ever Vince McMahon and Donald Trump were ready to come face to face. This match was a perfect dream billionaire vs billionaire match. Vince McMahon challenged Donald Trump to a match, in which the loser would lose his hair. Bobby Lashley was fighting for Trump and Umaga was fighting for Vince. This match is also exciting because Stone Cold Steve Austin was the special guest referee of this match. The match was won by Lashley, after which Trump, Lashley and Steve Austin altogether cut off Vince McMahon`s hair. Not only that, after the match, Steve Austin gave Trump a stunner.

This match is always remembered in WrestleMania history. The entire focus of this match was only on whether Hulk Hogan would be able to pick up the 525 lb Andre or not. The storyline of this match was totally a surprise which amazed WWE universe, because for 15 years Andre who was considered to be a very lovely and good heart man, challenged the biggest babyface Hulk Hogan for the WWE Championship in a jealousy and villainous manner. An unbelievable moment came when Hogan lifted Andre to deliver a scoop slam and won the match.

This match was a shocking and eye dropping scene for the WWE Universe and most importantly it was a bad day in the history of WrestleMania. The Undertaker came to fight in this match with his 21-0 ongoing streak. Nobody had defeated The Undertaker for 21 years, but Brock Lesnar did. The fans had tears in their eyes because they saw their childhood legend losing to Brock in the middle of the ring.

So, guys, this was the list. Hope you enjoyed reading it. I will catch you soon with another blog. Meanwhile, don`t forget to check my another blog - 10 Fastest WWE Title Changes In History