I am dedicating this blog to @lry who had brought back a lot of memories after commenting on my recently reviewed blog post regarding my entire stay with bitLanders for four long years and counting.

The review results were overwhelming and I was definitely stunned with when Miss Hillary showed me the five-star rating. Again, I am reiterating that receiving a reward for a blog is super uplifting and it boosts confidence.

Today's blog is a look back to what were the previous features that we as old users (hopefully nobody gets angry by the term I used here) had experienced before. Lately, I noticed there are a lot of new users coming into bitLanders. I would like to welcome you all to the coolest blogging platform in the whole wide web.

As much as I embrace change, I believe in the value of looking back to what had commenced in the past and the lessons we have learned for that. Here below are my top favorite bitLanders features which have been retired, or perhaps just being rested, for now, we might be enjoying them again soon, at least some of them so we must stay tuned to bitLanders surprises coming up in the near future.

None of the new ones here have tried this but a few years ago, bitLanders had been placing buzz points in random contents, it can be in movies, gallery but their favorite place to hide it was in blog contents. You'll only receive it once you open the blog content and it comes as a surprise!

I remember those ones who would find the buzz treasure post would post on their microblog informing everyone that there's something in this link and such. It was actually funny that most of the users here would go hunting. And when I say hunting, that means they visit different profiles and would start opening blogs and other items inside the user account.

However, I don't recall of bitLanders had posted an update on why they discontinued it. Perhaps it was just a trial thing and they really didn't push through on that feature. However, for me, it was a cool way for the users to be interactive and be explorers of the community's blog contents. Will they give it a second push so the newbies here can also experience earning free power up buzz points? 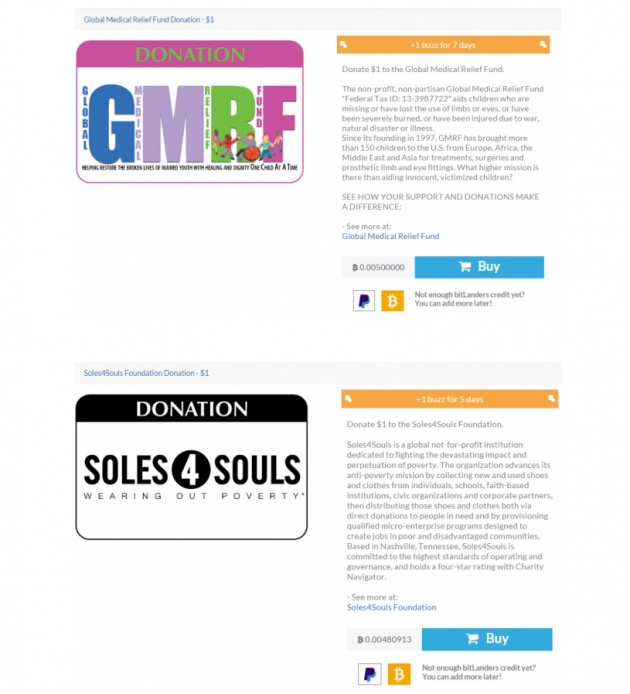 The end of bitCharities made me really really sad, I believe this affected other users too! I didn't see it actually coming to end but unfortunately, it did. All of us were having this worried face and negative thoughts as to why they were ending it!

bitCharities is the cause marketing side of bitlanders. bitCharities aims to educate users about social responsibilities and help nonprofits to spread their messages around the world. - bitCharities

I can't remember who had published the announcement, I tried to look for Micky-the-Slanted-Salerno's blogs but there was nothing about the closure of bitCharities. These donations were part of the bitShop, it was available alongside the bitFashionista and bitGoodies.

Personally, I have two good reasons why I wish it was not discontinued. First, it is a way for us to give back to the community. I learn through bitCharities account in bitLanders that from 2015, the site has gathered successfully over 4 million donations from 269,000 individual donors. Just imagine the huge impact of these donations to the entire world? The examples of such charities were GMRF, Americares, Legacy of Hope, Operation Supply Drop and a lot more!

Secondly, whenever we donate, it is not just a one-way process, we are also receiving something in return and I am speaking about buzz points. There were a specific number of buzzes we receive in return for a donation, it is very similar to purchasing gems but it was cheaper before.

I used to send donations every now and then because it feels good plus I am getting buzzes too! It's a win-win situation for me! And lastly, it shows up in my profile, anyone visiting my profile would have an idea that a donation was made and that will encourage him or her to also do the same!

Perhaps bitLanders can bring the charity back, it would be awesome! 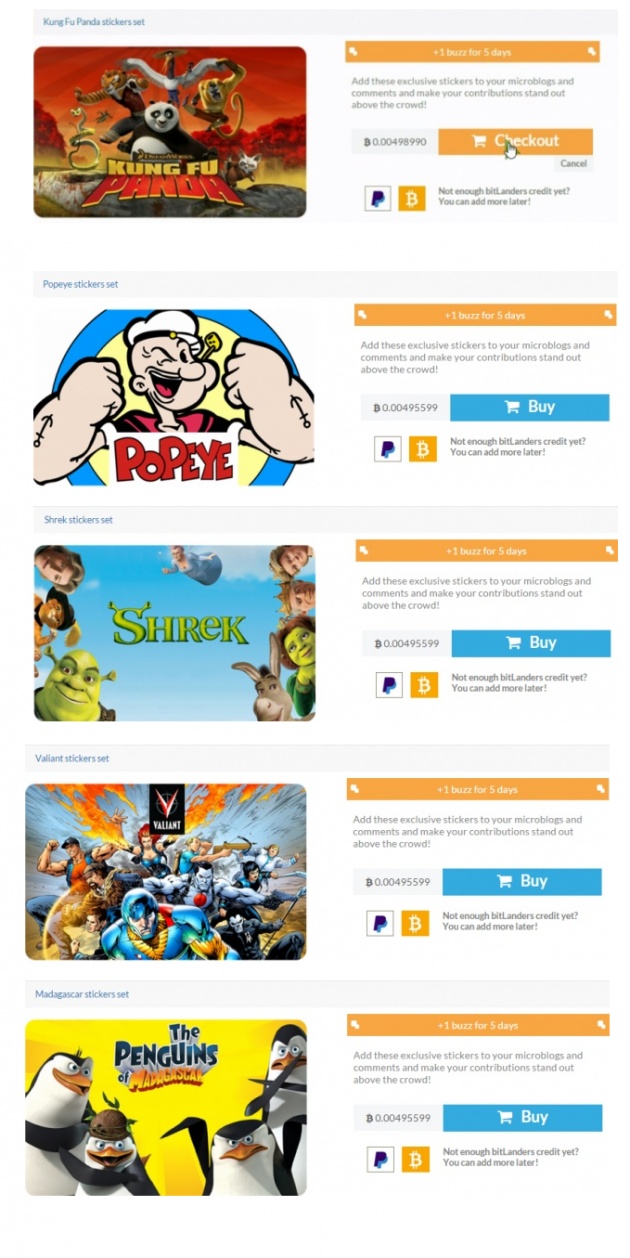 For new ones who had recently joined, you got six sets of free stickers which are already good enough but if you're wondering why I have pretty cool stickers like that of Shrek, Popeye, KungFu Panda and so on, that's because there were stickers for available for purchasing before!

These sticker sets were available in the store for quite some time. I am still wondering why they have stopped it but it is just cute to have more funny and lively stickers!

It's been more than two years I guess since that's not available anymore and nowhere to be found in the bitShop. I believe that it is just time for a new set of stickers! What do you think? I suggest those from Moana, Elsa and Anna and other Disney princesses or other cartoon characters! Perhaps some famous emojis too?

It's been awhile and I have not seen any bitShop Sale! I guess it is because the bitFashionista section has only a few items lately. If my memory serves me right, this event happened once only. Now, I wonder when will it be happening again!

Yes, that's right! Every new subscriber gives you +1 buzz score! How was that? Of course I still can't remember when it was discontinued but this is definitely one good way of earning buzz points. I guess it was stopped due to the many fraudelent users coming in because there were others who would just create dummy ones so they'll get more buzzes.

An update about Payza's termination from the payment option was a sad news for those who are based in certain countries which don't allow PayPal such as Pakistan. I don't really use Payza as I have PayPal and which is easier for me. However, the best option for cash out here in bitLanders happened years ago which is through BitCoin.

It was unquestionably the best time of bitLanders because users from all over the world would sign up and try their luck with the site. I suppose that when bitLanders stopped paying in BTC, the users were discouraged and eventually left the site.

But with the termination of Payza, although it was sad, it still came with a good news because BitCoin is coming back to bitLanders! I am exhilarated about that and I believe the rest of the community as well.

Cryptocurrency is something that is embraced now by the majority of the world and I believe that going back to it is the best decision bitLanders had done. Congratulations to everyone who had stayed with bitLanders, we will soon be earning crypto here!