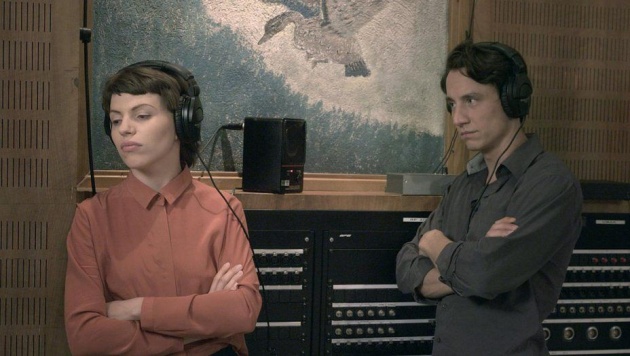 Two young performers, an actor (Laurence Jupp) and an actress (Anna Plaschg), read the letters of Paul Celan and Ingeborg Bachmann in ‘The Dreamed Ones’, a mock fly-on-the-wall look at the making of an audio track by Austrian filmmaker Ruth Beckermann (‘Those Who Go Those Who Stay’, ‘American Passages’). The location is the Funkhaus, a recording studio in the centre of Vienna. As well as reading the letters, the couple roll and smoke cigarettes (her’s is too thin and chokes the flavour, his needs trimming at the end). They sit in on an orchestral rehearsal and lounge around in the studio. At one point, they reflect on why some of Ingeborg’s letters were never sent. At another, the actress shows the actor her square tattoo.

This is the opposite of documentary – we only see pictures of the poets at the end. It is less about a definitive portrait of the on-off couple than a defining one, as if the whole of Celan and Bachmann’s personal and professional lives were a tangent to their relationship. The couple had a bond that is not fully understood or reflected upon by the performers reading their words. 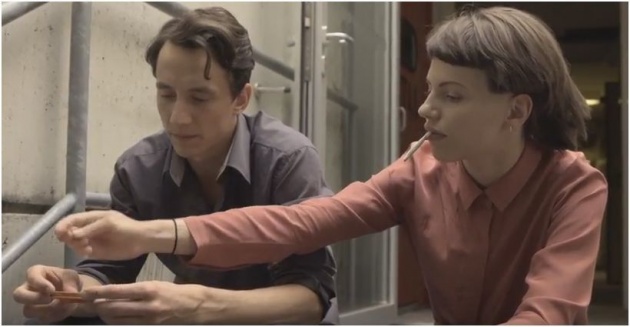 A ‘straight’ documentary might have asked us to understand the couple through corroborating testimony – what their peers (family, friends, people who were still alive and knew them) said. We have no such information. Beckermann provides the simplest of framing devices – an introductory caption that explains that Bachmann’s father was a National Socialist – a Nazi. Celan’s parents were killed in a Nazi death camp in Ukraine. Shame, tragedy – these are the emotions that cloud their relationship. You wouldn’t guess it from the words read by Jupp and Plaschg, who aren’t playing themselves, rather cast for their physical attributes, their voices and their youth.

Celan and Bachmann met in Vienna, where she was studying philosophy; her thesis was on Martin Heidegger, the disgraced philosopher banned from teaching after expressing support for the Nazis. Celan found work in Paris, teaching German language and literature, at the École Normale Superieur. He yearned for her to join him, but Bachmann had visa problems. Their brief period of living together was, by all accounts, disastrous. Celan married Gisèle Lestrange in 1952. Bachmann commenced a relationship with famed Swiss playwright and novelist, Max Frisch (‘The Fire Raisers’, ‘Homo Faber’) in 1958. But in 1957, Celan and Bachmann met again and continued to correspond. In her letters, Bachmann pleaded with Celan not to leave his wife, Gisèle and their child.

Some of this narrative is conveyed in the letters. Beckermann’s film begins with Celan’s poem, ‘In Egypt’, dedicated to Bachmann on her 22nd birthday, in which he summons the spirits of three deceased Jewish girls, Ruth, Miriam and Naomi, to ‘adorn’ Ingeborg. We don’t get Ingeborg’s response, exactly, although to her Celan (born Antschel, shortened to Ancel before Paul turned it into Celan, his professional name) came from ‘India, or a more distant, dark brown land’. Celan in his dedication describes Bachmann as painfully precise and himself as painfully imprecise.

The effect of watching people read letters into microphones is to pay less attention to the words and more to the delivery. I found myself barely able to remember any quotations from the film directly after seeing it. It didn’t help that, barely an hour later I attended a midnight screening of ‘Rogue One – A Star Wars Story’. The actors cannot be the characters in a real sense. They don’t age. They lock the affair into its youthful phase, so even though the letters span almost twenty years – the last is sent in 1967, three years before Celan’s ‘disappearance’ (suicide) in Paris in 1970 – the actors’ delivery does not change. The faces of the young cast become an anchor that the words move away from, so that I paid less attention to the content. Only the emotion – two unhappy but successful people writing to each other – stayed with me. The lovers are reduced to outlines, the equivalent of a faded photograph, where only the expressions but not the defining features are present.

Spoiler alert: at the end of the film we are told that in 1973, three years after Celan died, Bachmann was severely burned from a fire in her apartment, apparently caused by a stray cigarette. In the course of her recovery, she died.

What I didn’t get from the film, but from my reading afterwards, was Celan’s difficulties with a charge of plagiarism by Claire Goll, the widow of the French German poet Ivan Goll. Before he died in 1950, Goll asked Celan to translate his French poetry. However, the translations went unpublished because (according to his widow) they bore Paul Celan’s signature. Indeed, Claire Goll alleged that some of the passages in Celan’s most famous poem, ‘Death Fugue’ came from her husband’s work. Celan was briefly hospitalised. Thereafter, his poetry became more elliptical, less tied to its context. The film too is elliptical; it is interesting that Beckermann honours the form of Celan’s work and not Bachmann’s.

As Celan himself reflected, Bachmann is precise. Her poem, ‘Every Day’ (‘Alle Tage’) written in 1961, reflects on war: ‘The medal is awarded/when nothing more happens/when the artillery falls silent/when the enemy has grown invisible’. It is a poem about the unending nature of war, that resonates to this day, its opening line, ‘War is no longer declared/only continued’ resonates in the era of domestic terrorism, of unresolved ethnic, political and religious tensions, of heinous philosophies that fight against being discredited.

Beckermann’s film elevates the feelings of the lovers to something devoid of physical yearning. Celan misses Bachmann’s letters – who wouldn’t? They are elegantly crafted and brim with passion. Their relationship – or non-relationship – is a testament to the imperfection of life; that two souls who connect cannot be in physically united. This accounts for the representation. The actor and actress don’t speak to each other, rather into a microphone. At one point, when the actor is reading, the actress lounges on a lips shaped sofa. I have to say her lounging seems rather theatrical, a fake pose.

Although Celan and Bachmann’s fates are tragic – both died comparatively young - ‘The Dreamed Ones’ lacks emotional impact. I’m not sure Beckermann was striving for this, rather a reflection on love that refuses to die or to take a conventional form.