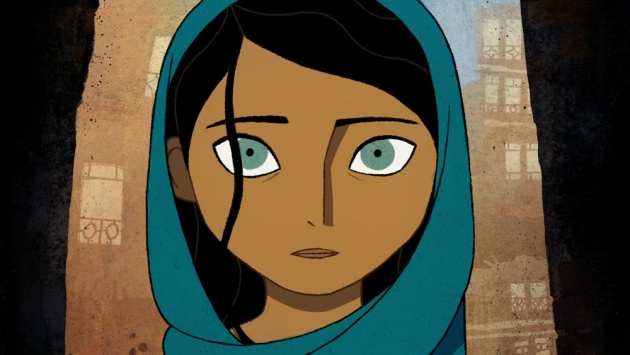 Here’s a fun fact: women are more likely to be nominated – and win – an American Academy Award as Best Director of an animated feature than helming a live action film. Marjane Sartrapi, Jennifer Yuh Nelson and, most recently Nora Twomey have been nominated. Brenda Chapman and Jennifer Lee won in successive years for Brave and Frozen respectively. Significantly, Sartrapi, Nelson and Chapman have subsequently made – or are making – the transition to live action films.

The route to directing animation can be straight forward. You start as ‘head of story’ as Brenda Chapman did and then convince a producer that you can shepherd a film to completion. Nora Twomey’s route was different. She co-directed (with Tomm Moore) The Secret of Kells and then spent four years to bring her animated film version of Deborah Ellis’ novel, The Breadwinner, to the screen. The film, from Kilkenny’s Cartoon Saloon, is quite literally a labour of love. It is about the love that an eleven year-old girl, Parvana (voiced by Saara Chaudry) has for her father, who is arrested by the Taliban in Afghanistan in 2001.

Unable to be served in shops under the Taliban’s strict rules, the family of women (and one toddler boy) are destined to starve until Parvana cuts her hair, dresses in the clothes of her deceased older brother and pretends to be a boy, hoping to raise enough money to bribe a prison guard to see her father one last time.

The novel, first published in 2000, is one of a trilogy – its sequels are Parvana’s Journey and Mud City. It contains such ghoulish details as Parvana raiding graves to sell the bones of the dead. The practice of turning a girl into a boy for purposes of survival is known (in Dari) as ‘bacha posh’ as described in Jenny Nordberg’s acclaimed 2014 non-fiction book, The Underground Girls of Kabul. 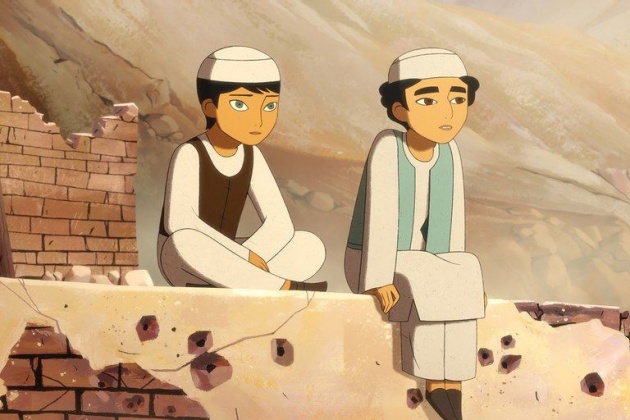 Pictured: Parvana (as a boy) and her new friend in 'The Breadwinner', an animated film directed by Nora Twomey. Still courtesy of Aircraft Pictures/Cartoon Saloon

Twomey’s film omits the grave robbing and a supporting character, Mrs Weera, who in the book moves into the household and joins Parvana’s mother in cutting Parvana’s hair. In the film, Parvana is inspired by another ‘bacha posh’ who asks for her help selling tea.

The changes made by Twomey and writer Anita Doron - a director in her own right, with the Canadian film, The Lesser Blessed - work extremely well. It is less a story of survival, with others making choices for Parvana, than about a young girl’s determination to see her father again. It is also a film about the power of stories. In a parallel narrative, Parvana narrates to young Ali the story of a boy who sets out to rescue his people’s seeds from a vicious fire god.

The film’s antagonist is a former student of Parvana’s father who has joined the Taliban and is fully indoctrinated. He despises his former teacher and asks for Parvana’s hand in marriage. When Father says Parvana is promised to another, the soldier has him arrested. He appears again when Parvana and her friend undertake manual labour. Twomey portrays him as a weak bully, eager to please, and, ultimately a coward.

Although animated, The Breadwinner is not family entertainment. It features a scene of Parvana’s mother being beaten when she first sets out to her husband. Twomey could have eased up on the accompanying score (by Mychael and Jeff Danna) to heighten the dramatic impact of the scene. In a live action dramatic film, violence against women is set to music, but the counterpoint is revenge against the attackers, accompanied by more triumphant music – it builds to a peak before the final gunshot, explosion, or whatever. (‘So long, buttwipe’ – boom!) Here, Twomey doesn’t engage in catharsis through punishment – it is not part of the discourse of women’s struggle. In general, feminism requires recognition of women’s equality (in amongst other equalities) and for women to have the same opportunities and positions of influence in society as men. Replacing or eliminating men isn’t part of the project. But films by women don’t always fully articulate the destination of the feminist movement for fear of alienating the audience. Commercial ‘feel good’ cinema – especially in America – operates as if inequality doesn’t exist. 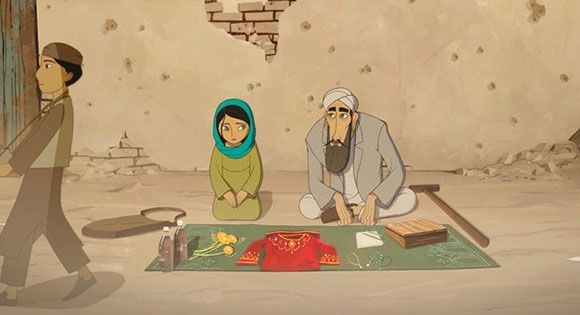 Pictured: Items for sale in 'The Breadwinner', an animated film directed by Nora Twomey and adapted from Deborah Ellis' novel. Still courtesy of Aircraft Pictures/Cartoon Saloon

By framing the narrative through Parvana’s love of her father, The Breadwinner isn’t attacking patriarchy. Parvana gets her love of stories from him and takes his place in the market selling reading and writing services: ‘anything written, anything read?’ She is approached by a man who asks her (in her guise as a boy) to read a letter. It is bad news. Parvana doesn’t charge for the service and the man later offers a kindness in return.

Ellis’ book was published before 9/11 – the attacks on the World Trade Center and the Pentagon on 11 September 2001 - and subsequent allied action against the Taliban. The film moves the action forward so we see jet fighters, explosions and prison guards leaving their posts in order to flee from the bombing. If there is a catharsis – and Twomey sets it to flutes or pan pipes – it is that women will have to rebuild a country devastated by bad men. There is a hopeful ending in which Parvana’s sister escapes a potentially disastrous arrangement – I won’t describe it – and Parvana has a saviour who (unseen by us) kills another man. Twomey doesn’t concern us with the fate of Parvana’s saviour – the narrative thrust renders this irrelevant. We are supposed to just forget about him; he will disappear with the other deserters. There is also a sense that his tragedy, through what we know about him prior to this moment, means he has accepted that he will die soon, with nothing else to live for. However, I found the sidelining of this character troubling.

Cartoon Saloon has a particular style that accentuates the two-dimensional nature of characters. Faces are rendered simply: huge eyes, a couple of lines for the nose, an oval mouth. Parvana’s defining characteristic is the strand of hair that falls down below her right eye. Under the Taliban edict, women should hide their hair under a scarf or chador. The strand of hair that falls out of place represents Parvana’s irrepressible spirit – she can’t help being a girl. When she transforms herself into a boy, it is the first thing to go. The animation is rich in shadows and outlines – you wouldn’t mistake it for a Disney film, where aspects of every character – save for the villains – is rounded off. The background has some telling detail – a few bricks in a wall, the sparkling decorations on a dress for sale. It has the simplicity of a children’s picture book, but given this film is aimed at older children, owing to the violence, the style isn’t quite appropriate.

Ultimately, The Breadwinner conveys worthy intentions. It doesn’t fully explore the scenario of a girl pretending to be a boy. Nor does it attempt to explain the origin and appeal of the Taliban, who emerged in Afghanistan in 1994 and later Pakistan as the guarantor of peace and security, albeit at a heavy price – the imposition of strict Sharia law. The film has modest ambitions and modest returns but doesn’t quite leap from the screen to create a heroine that you would want to emulate. The nearest comparable animated film is Disney’s Mulan (1998), in which a young woman poses as a boy to save her father from military service; the film was enlivened by the vocal contribution of Eddie Murphy as a dragon sidekick. The Breadwinner is not conceived as ‘total entertainment’ – a bit of drama here, a slice of comedy there. Perhaps Cartoon Saloon could rethink its model to create a film that both takes on a challenging subject and provides more visual pleasure for its audience.