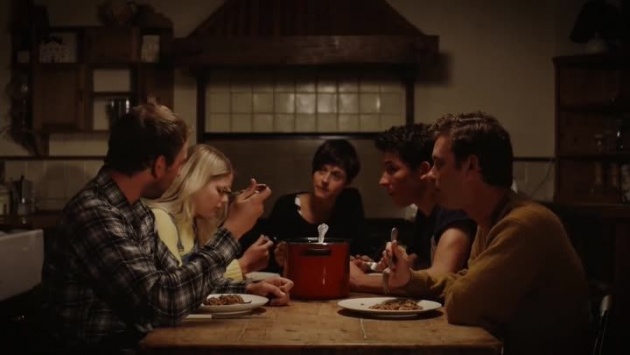 The 52nd (but not final) film of my study is Hide and Seek, an independent, pre-crowd funded film by British co-writer-director Joanna Coates and American producer-co-writer-star Daniel Metz, shot in 2012 but first exhibited in 2014 at the Edinburgh International Film Festival as Amorous. It is about four young people who go to live in a house somewhere in Herefordshire, eat baked beans, burn stuff, enact their own entertainment and flirt with the idea of monogamy. It is like the TV show Big Brother with a much smaller cast – I thought three couples would have been more interesting than two – but where no one gets voted off. There is no Diary Room or self-reflection. The tasks are non-existent. No-one goes shopping. The characters make their own entertainment in a way that doesn’t appropriate from other cultures – there is the American chat show, British theatre and a mock date but no-one raps or yearns for a curry. There are also no logos, either on the film itself (a welcome relief) or on the items they consume. At one point, I expected to see an Opodo van (the supermarket Waitrose’s delivery service) but that would be ‘socially realist’ as opposed to ‘emotionally realist’, Coates’ description of her film.

On one level, Hide and Seek is about the limitations of the US-UK ‘special relationship’ reduced to constituent elements and represented by white people with inherited wealth. It is not very interesting and frankly a world that you would want to live in: a cult that stops at four members, what’s the fun in that? As we know from ‘social realist’ films, cults tend to have a leader. For me, it was Jack (Daniel Metz) who at the Q and A sat on the floor and exercised an oddly controlling presence. The film had to be made in six months to comply with the terms of his American visitor’s visa (well, the film is not commercial) and was finally filmed in 12 days after an extensive ‘getting to know you’ phase of pre-production – the actors were encouraged to kiss each other on the mouth, which may be your kind of film set, so long as mints are involved.

What of the actors? One of them has a prominent phallus, which he strokes in a masturbatory fashion at one point. In a ‘social realist’ film he would have to clean the sheets. The other three are Hannah Arterton (Gemma’s sister) as Charlotte, Rea Mole as Lea and Josh O’Connor as Max. There is a fifth member of the cast, Joe Banks, as Charlotte’s (ex) boyfriend Simon, who turns up to visit and is locked in a room with Lea, expected to make love, although sleeping on the floor and toileting out of the window might be an option – in a ‘social realist’ film, he would be on clean-up duty. He leaves soon afterwards, though Coates spares us the ‘you’re all bonkers, you know’ speech. But we felt it, you know, we did.

So if there is a dramatic dynamic it is that Jack has whisked two girls away from their ties to others to decide which one he wants to sleep with the most. No-one talks about this, but we’re feeling it. Max is too weak to stop him. In the chat show scene, Jack hosts a conversation with his three guests and reacts testily to Max wanting to turn the tables on him. As they don’t have a television, Jack doesn’t know how Jimmy Fallon (or 2012 equivalent) might have dealt with this, so he through a cup full of tinsel-paper.

Early in the film, torches are lit and we see the characters standing around a fire. I thought these young people might be mourning something – after a while it seemed to be the lack of a script.

At another point, a tent is erected, clearly for some outdoor rumpy pumpy; we British no more like to talk about sex than we do about the EU Referendum result, although both have screwed us up. The boys are disappointed that the girls claim it as their gossip space, not that there is much to talk about.

On another level, the film is one endless summer sleepover (no rain, how un-British) with plenty of nudity, exposing most Rea Mole’s breasts, but no return to one’s parents’ house. The arrangement is described as utopia, but it isn’t an economic unit, just an endless supply of tinned goods, toilet paper and female hygiene products (not that we see the latter too, but we have to accept that they are there).

Who does Jack choose? At one point, Max proposes to Charlotte and they seem like a lovely couple (you can see the family resemblance between Hannah Arterton and her more famous sister, Gemma, star of Tamara Drewe). But in true sit-com manner – this is like a situation comedy but without laughs – they are just playing to wind up Jack and Lea. Honestly, their faces!

With little emotional tension or progression – Coates might have seen Paul Mazursky’s Bob & Carol & Ted & Alice with its threat of wife swapping but she has rejected the moral exploration that went with it – the film meanders along to an open-ending. This quartet are the sort who sing ‘In the Bleak Midwinter’ in the middle of summer – there are plenty of soft focus shots of fauna for the film to be passable cinematic wallpaper, something you have on in the background but don’t have to fully engage with. I don’t know if this group are being ironic – for that, you have to have an audience. Hide and Seek, which won an independent British movie award at Edinburgh in 2014 but has been passed up for distribution will be screened at a number of cinemas before a DVD release on 22 August. If Coates hasn’t acknowledged Kickstarter, she has also steered clear of Our Screen, the facility in the UK where viewers can request a film and a cinema and arrange a screening themselves. Stuck in that house all day? She needs to get out more. 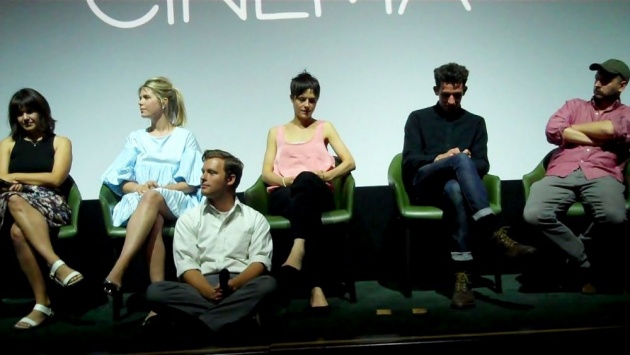 Screened at Regent Street Cinema, Central London, Friday 8 July 2016, 19:30 with a Question and Answer session with the cast - from left to right Joanna Coates, Hannah Arterton, Daniel Metz (cross-legged on floor), Rea Mole, Josh O'Connor and Joe Banks - they paid for Joe's train fare (Metz and Coates just wanted you to know that)