This is a blog... about another blog. But one that inspires me hugely and one I want to share.

At the moment, I've been reading "Like A Virgin- Richard Branson"... and its an amazing book! I've loved it so far. Richard Branson has always been out there, with his smiley face, but its only recently i've taken notice of him, after beginning to read this book. And he is a HUGE inspiration to me!

Its not that he's incredibly successful, which of course he is, or that he has an extremely happy home life, or that he's a millionaire... its that he has morals and beliefs that I 100% agree with. He believes in treating people RIGHT, and good things will come to you! Its as simple as that. Combining this, with ACTING on your ideas, rather than just talking about them, is what made him a success... and that's exactly how I want to do it.

I've just come across this article:

Which is other young people encouraged and supported by Richard, who have learnt the same values and are taking them into their own successful businesses. I have followed his own blog for some time now... take a look!! 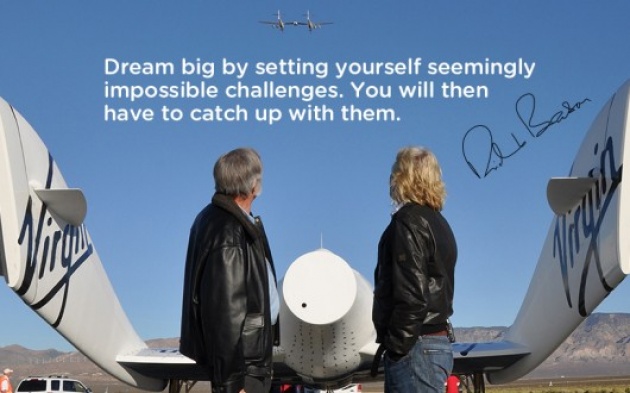 In the world I work in, inequality is all too apparent... not with everyone, but some of the "Old Fashioned" Heads of Department, Clients, or Agency folk, some of whom act a little to high and mighty to the people around them.

Don't get me wrong, I don't mind making anyone tea, I had a plumber in today... and I made him a tea, because we were on equal terms, but he was working harder than I was at that moment in time, and he looked like he needed one. It all comes down to mutual respect.

However, in the past I have witnessed people being treated with an incredible lack of respect, just because they are lower in the rankings than another person... not getting a thank you for hard work, or a tea even... I've heard horror stories about a director calling a 2nd AD all the names under the sun... and then being suprised when he walked off set and wouldn't return... I've witnessed runners being literally forcefully pushed out of the way by a producer (With no sorry) and plenty more horrible things. And the problem is, we also witness these people being INCREDIBLY polite and caring and kind and thoughtful etc etc etc as soon as the person they need to suck up to arrives... so we know they can help it if they try. I've come across another blog where a guy goes into more detail from the LA side of things:

It makes my blood boil, and I want to work in a world where we can all work together for a collective goal... things run a lot better with mutual respect and a bit of humanity. Wouldn't you agree?

If you've ever heard, seen or had any horror story encounters... let me know! I'd love to hear them, and bit by bit, try to do something about it!

Lets hope that the future big bosses of companies big and small are all like Richard Branson! Then the entire world would be like a virgin airways flight... with less free choc ices!