Sir Muhammad Iqbal (Urdu: محمد اقبال ‎) (November 9, 1877 – April 21, 1938), widely known as Allama Iqbal (علامہ اقبال), was a poet, philosopher, and politician, as well as an academic, barrister and scholar[1][2] in British India who is widely regarded as having inspired the Pakistan Movement. He is considered one of the most important figures in Urdu literature,[3] with literary work in both the Urdu and Persian languages.[2][3]

Iqbal is admired as a prominent poet by Pakistanis, Indians, Bangladeshis, Sri Lankans and other international scholars of literature.[4][5] Though Iqbal is best known as an eminent poet, he is also a highly acclaimed "Muslim philosophical thinker of modern times".[2][5] His first poetry book, Asrar-e-Khudi, appeared in the Persian language in 1915, and other books of poetry include Rumuz-i-Bekhudi, Payam-i-Mashriq and Zabur-i-Ajam. Amongst these his best known Urdu works are Bang-i-Dara, Bal-i-Jibril,Zarb-i Kalim and a part of Armughan-e-Hijaz.[6] Along with his Urdu and Persian poetry, his Urdu and English lectures and letters have been very influential in cultural, social, religious and political disputes.[6]

In 1922, he was knighted by King George V,[7] granting him the title "Sir".[8] While studying law and philosophy in England, Iqbal became a member of the London branch of the All-India Muslim League.[5][6] Later, during the League's December 1930 session, he delivered his most famous presidential speech known as the Allahabad Address in which he pushed for the creation of a Muslim state in Northwest India.[5][6]

In much of South Asia and the Urdu speaking world, Iqbal is regarded as the Shair-e-Mashriq (Urdu: شاعر مشرق‎, "Poet of the East").[9][10][11] He is also called Mufakkir-e-Pakistan (Urdu: مفکر پاکستان‎, "The Thinker of Pakistan"), Musawar-e-Pakistan (Urdu: مصور پاکستان‎, "Artist of Pakistan") and Hakeem-ul-Ummat (Urdu: حکیم الامت‎, "The Sage of the Ummah"). The Pakistan government officially named him a "national poet".[5] His birthday Yōm-e Welādat-e Muḥammad Iqbāl (Urdu: یوم ولادت محمد اقبال‎), orIqbal Day, is a public holiday in Pakistan.[12] In India he is also remembered as the author of the popular song Saare Jahaan Se Achcha

Background[edit]
Iqbal was born on 9 November 1877 in Sialkot within the Punjab Province of British India (now in Pakistan). His grandparents were Kashmiri Pandits, the Brahmins of the Sapru clan from Kashmir who converted toIslam.[10][14] In the 19th century, when the Sikh Empire was conquering Kashmir, his grandfather's family migrated to Punjab. Iqbal often mentioned and commemorated his Kashmiri Pandit Brahmin lineage in his writings.[10]

Allama Iqbal with his son Javed Iqbal in 1930

Iqbal's mother, who died on 9 November 1914. Iqbal expressed his feeling of pathosin a poetic form after her death.
Iqbal's father, Sheikh Noor Muhammad (died 1930), was a tailor, not formally educated but a religious man.[15][16] Iqbal's mother Imam Bibi was a polite and humble woman who helped the poor and solved the problems of neighbours. She died on 9 November 1914 in Sialkot.[17][14]Iqbal loved his mother, and on her death he expressed his feelings of pathos in a poetic form elegy.[15]

Who would wait for me anxiously in my native place?

Who would display restlessness if my letter fails to arrive?
I will visit thy grave with this complaint:
Who will now think of me in midnight prayers?
All thy life thy love served me with devotion—
When I became fit to serve thee, thou hast departed.[15]
Iqbal was four years old when he was admitted to the masjid to learn the Qur'an. He learned the Arabic language from his teacher Syed Mir Hassan, the head of the madrassa and professor of Arabic language at Scotch Mission College in Sialkot, where he matriculated in 1893. He received Intermediate with the Faculty of Arts diploma from Murray College Sialkot in 1895.[17][10][18] The same year he enrolled at theGovernment College Lahore where he obtained his Bachelor of Arts in philosophy, English literature and Arabic in 1897, and won the Khan Bahadurddin F.S. Jalaluddin medal as he took higher numbers in Arabic class.[17] In 1899, he received his Masters of Arts degree from the same college and had the first place in Punjab University, Lahore.[17][10][18]

Iqbal married three times, in 1895 while studying Bachelor of Arts he had his first marriage with Karim Bibi, the daughter of physician Khan Bahadur Ata Muhammad Khan (the maternal grandfather of director and music composer Khwaja Khurshid Anwar),[19][20] through an arranged marriage. They had daughter Miraj Begum and son Aftab Iqbal. Later Iqbal's second marriage was with Sardar Begum mother of Javid Iqbal, and his third marriage was with Mukhtar Begum in December 1914.[17][9]

Iqbal in Spain, 1933
Higher education in Europe[edit]
Iqbal was influenced by the teachings of Sir Thomas Arnold, his philosophy teacher at Government college Lahore. Arnold's teachings determined Iqbal to pursue higher education in the West, and in 1905, he travelled to England for that purpose. Iqbal qualified for a scholarship from Trinity College, University of Cambridge and obtained Bachelor of Arts in 1906, and in the same year he was called to the bar as a barrister from Lincoln's Inn. In 1907, Iqbal moved to Germany to pursue his doctoral studies, and earned a Doctor of Philosophy degree from the Ludwig Maximilian University of Munich in 1908. Working under the guidance of Friedrich Hommel, Iqbal's doctoral thesis entitled The Development of Metaphysics in Persia was published.[10][21][22][23]

During Iqbal's stay in Heidelberg in 1907 his German teacher Emma Wegenast taught him about Goethe's Faust, Heine and Nietzsche.[24] During his study in Europe, Iqbal began to write poetry in Persian. He prioritised it because he believed he had found an easy way to express his thoughts. He would write continuously in Persian throughout his life.[10]

Photograph taken during Allama Iqbal's youth in 1899
Iqbal, after completing his Master of Arts degree in 1899, began his career as a reader of Arabic at Oriental College and shortly afterwards was selected as a junior professor of philosophy at Government College Lahore, where he had also been a student in the past. He worked there until he left for England in 1905. In 1908, he returned from England and joined the same college again as a professor of philosophy and English literature.[25] In the same period Iqbal began practising law at Chief Court Lahore, but he soon quit law practice and devoted himself in literary works, becoming an active member of Anjuman-e-Himayat-e-Islam.[17] In 1919, he became the general secretary of the same organisation. Iqbal's thoughts in his work primarily focus on the spiritual direction and development of human society, centred around experiences from his travels and stays in Western Europe and the Middle East. He was profoundly influenced by Western philosophers such as Friedrich Nietzsche, Henri Bergson and Goethe.[15][24]

The poetry and philosophy of Mawlana Rumi bore the deepest influence on Iqbal's mind. Deeply grounded in religion since childhood, Iqbal began concentrating intensely on the study of Islam, the culture and history of Islamic civilisation and its political future, while embracing Rumi as "his guide".[15] Iqbal would feature Rumi in the role of guide in many of his poems. Iqbal's works focus on reminding his readers of the past glories of Islamic civilisation, and delivering the message of a pure, spiritual focus on Islam as a source for sociopolitical liberation and greatness. Iqbal denounced political divisions within and amongst Muslim nations, and frequently alluded to and spoke in terms of the global Muslim community or theUmmah.[6][15]

Iqbal's poetry has been translated into many European languages, at the time when his work was famous during the early part of the 20th century.[5] Iqbal's Asrar-i-Khudi and Javed Nama were translated into English by R. A. Nicholson and A. J. Arberry respectively 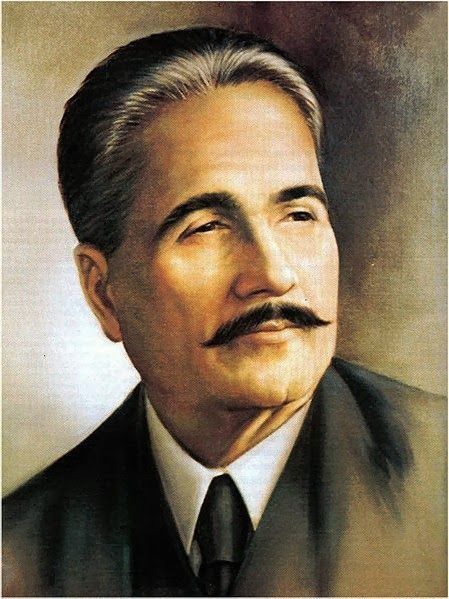