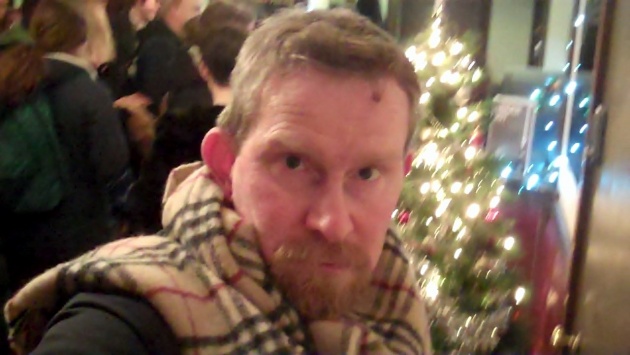 The problem with going to the cinema in London at Christmastime is that every chain is showing the same darn movies. Once you’ve seen ANCHORMAN 2, FROZEN, THE DESOLATION OF SMAUG, FILL THE VOID and HUNGER GAMES: CATCHING FIRE you are pretty much at the bin-end.

Thank goodness for the Prince Charles Cinema who picked up the slack where the late-lamented Scala cinema left off! On 29 December, this two screen cinema, which shows second-run films (currently CAPTAIN PHILLIPS and PHILOMENA) in one screen whilst holding audience-participation screenings of recent flicks (quote-along MEAN GIRLS, aca-along PITCH PERFECT), held their regular beer and pizza night.

For £11.00 (£8.50 for members) you buy a ticket for a recent-ish movie and precede it with a single serving of a can of Heineken Beer and a large slice of Margarita pizza – my hunger prevented me from taking a picture of the latter. On this occasion, they screened Mary Harron’s 2000 film adaptation of Bret Easton Ellis’s controversial novel, AMERICAN PSYCHO, currently the subject of an off-West End musical with Matt (ex-DR WHO) Smith in the leading role.

Harron’s film tells the story of a Wall Street investment banker, Patrick Bateman (Christian Bale, buffed up) who has a murderous heart and the tools (axe, knives, staple gun, chainsaw and duct tape) to match. He is neither saved nor undone by the love of a beautiful woman but instead just wants someone to stop him: ‘just say no,’ he says at one point. His first on-screen victim is a homeless man. His second is a fellow trader, Paul Allen (Jared Leto), from a rival company who mistakes him for someone else. We see men in offices, at parties and in exclusive – and not so exclusive – restaurants, but not the elusive Dorsia. They are never shown doing actual work. Patrick has a secretary, Jane (Chloe Sevigny) whom he tells, ‘never wear that outfit again’ in the opening scene but who nevertheless continues to wear conservative suits. You wonder in fact whether Patrick verbally abused her – so she had nothing to respond to. This is the point. It is never entirely clear how much of what we see actually takes place.

Before the film was released, critics speculated whether the novel with its excessive violence could be faithfully adapted, or whether Harron’s adaptation would celebrate murder. The death scenes are simultaneously over-the-top and restrained. Moreover, murder is played for laughs. When Patrick carts the body of Paul Allen into a waiting taxi, one of his friends stops him and asks ‘what’s the overnight bag’ (as opposed to what’s in it). ‘Jean-Paul Gauthier,’ replies Patrick, struggling to stuff the dismembered corpse into a boot. The point is that the New York rich have no interest of what is beneath the surface.

Though made at the turn of the millennium, Harron’s film is set in the late 1980s. At one point, Patrick’s fellow Vice Presidents at Pierce and Pierce wonder whether there is anything going-on in President Reagan’s brain. Early on, prior to the first murder, Patrick gives a speech to his crowd – one can scarcely call them friends – about moral responsibility and what the rich are supposed to do. It elicits ironic applause but is not taken seriously. Patrick’s set are absorbed in a game of sartorial one-upmanship, where one man’s business card out-trumps another (one man’s ‘even got a water mark). Harron doesn’t need to show the men-at-work competing to maintain accounts; their response to each other’s cards and also the view from their apartment window is enough to determine the pecking order.

Or is it? The most interesting aspect of the movie is that on three occasions, Patrick is mistaken for someone else. This leads to dinner with Paul and a sequence in which Paul is bludgeoned (off screen) with an axe in Patrick’s apartment. In the second instance, Paul is called by a security guard by another name. At the end of the film, Patrick’s lawyer calls him yet another name, referring to Patrick Bateman in the third person. We are not entirely sure who Christian Bale is playing. At this point, we discover that Paul Allen isn’t murdered – the lawyer ‘had dinner in London with him ten days ago.’ The entire movie is an unreliable narrative. This conversation is also foreshadowed by an exchange between Patrick and a cop ‘he was seen in London but it didn’t check out’.

It is significant that Patrick does not kill either his fiancé Evelyn (Reese Witherspoon) or his lover Courtney (Samantha Mathis). There is even a strange scene where Patrick has dinner with the police detective (Willem Dafoe) investigating Paul’s disappearance. Would you really have dinner with the police? It is as if every encounter in the film is re-shaped either into a dinner date or murder scene.

About those murder scenes! In a recurring motif of heightened comedy, Patrick precedes each killer with a monologue about a piece of contemporary music: Huey Lewis and the News’ ‘Hip to be Square’, Phil Collins ‘Sussudio’ or a Whitney Houston song. At these points, it becomes particularly acute that Bale is channelling Nicolas Cage at his most deadpan. (You sense the actor studied Cage for the role; Cage similarly buffed-up for his KISS OF DEATH-THE ROCK- CON AIR-FACE OFF-action movie phase.) As Patrick talks about music, there is no response from the other person, another signifier that the murders are all taking place in his head; perhaps the film should be programmed on a double bill with THE SECRET LIFE OF WALTER MITTY.

We see Patrick watch porn and later exercise (chest crunch) whilst THE TEXAS CHAINSAW MASSACRE plays in the background – a not-entirely-convincing juxtaposition, but staged to suggest his de-sensitisation. There is one scene that might have taken place when Patrick picks up a prostitute (Guinevere Turner, the film’s co-scriptwriter) in a remote part of the city too dangerous for a single prostitute to work and is taken to his apartment where another woman from an agency, not a blonde as he had requested but a ‘dirty blonde’ joins them for group sex. The funniest moment comes from Patrick asking the two women, ‘don’t you want to know what I do?’ ‘No,’ they reply in unison. The inference is that they are only interested in his money. Patrick videotapes his performance – he pleasures one woman whilst she pleasures another. Then he reaches for a wire coat hanger. This is the only scene that suggests censorship interference; the cutting is a little too fast. It is also one of the few acts of violence that is referred to again, as Patrick propositions the prostitute a second time and she expresses justifiable reluctance to get into his car.

As the violence becomes more hysterical, so it becomes unreal. It ends with Patrick opening fire on policemen and a cop car exploding and then entering a building where he shoots the security guard and swings through a revolving door to finish off the cleaner. In a second building, he retreats to an office and then calls his lawyer; this conversation is considered a ‘practical joke’. Genuine humour also revolves around Patrick’s ineffectual alibi, that he was ‘returning videotapes’; there is the suggestion that his head is re-running them.

By the end, Patrick has broken off his engagement and been prepared to give up his friends – well, these are the kind of guys more likely to object to noise whilst they are doing coke than the cost of things. His attempt to strangle a man is construed as a gay come-on, from which he retreats. His secretary has discovered some graphically violent drawings in Patrick’s diary. The final shot is of Patrick’s eyes. We are not sure if his gaze is murderous, or whether his stare is empty. The impression is that AMERICAN PSYCHO the movie is something of a violent but not too unpleasant joke. You don’t feel unnerved.

The audience at the Prince Charles were extremely fidgety; plenty left to return with pint glasses of tap water (maybe to aid digestion or to dissolve tablets). At least one young woman attempted to bop to the 1980s soundtrack as if the screening did demand audience participation – she gave up after the first number. So I would not recommend the pizza and beer night as a contemplative movie experience. However, the screening was busy with the young crowd young blowing off some Christmas party cobwebs. I was even allowed a second slice of pizza (one customer did not want his). So not all bad!

3 Posters for Exodus: Gods and Kings

Check out this art posters for the upcoming epic from Ridley Scott, Exodus: Gods and Kings, starring…

THE CANYONS is a good, bad movie, 2014s first cult classic. In time, it will play late night at cert…

Christian Bale and company in the new American Hustle Posters!

As we have all heard the world over, Ben Affleck is going to play the older, wiser Bruce Wayne aka B…