For many years now, people who are not indifferent to video games, have been unlucky for their worthy movie adaptations. Director Paul W. S. Anderson made good attempts to bring the Resident Evil series to the big screen, but with each new film, the movie universe moved farther and farther away from the source.

The only thing that has not changed over the years is the grace and dexterity with which the main character Alice, performed by Milla Jovovich, dealt with her enemies. Fifteen years after the first film, the RESIDENT EVIL: THE FINAL CHAPTER of the saga was finally released. Will it become a worthy end to the series or continue the series of unsuccessful film adaptations?

For fans of "Resident Evil,” I believe this final film will not disappoint, but it also will likely encourage newcomers to the saga to go back and play a bit of catch-up by watching the earlier movies.

The last chapter of the legendary epic zombie apocalypse threw fans into the endless ocean of Sansara. As if a snake biting its tail, the story returned them to the sinful Raccoon City. Large-scale destruction of a gaping hole the size of a quarter and mutants waiting for rare travelers in the most unexpected places.

What RESIDENT EVIL: THE FINAL CHAPTER is all about?

Milla Jovovich kills zombies again. All the same actors, the same heroes, and the same director. Again, Alice, performed by Jovovich, is fighting the Umbrella Corporation, which infects humanity with a deadly virus that turns everyone into zombies. The only - and important - difference - the film should be the last in the franchise.

The film puts an end to the story and even has one unexpected plot twist. They will tell us about Umbrella’s motives, without paying attention to all the facts that were mentioned in previous films and reveal the secrets of Alice’s past.

They will also recall the evil T-virus, which was originally not a harmful infection at all, but for some reason, it was called a virus.

From the third part, clones appeared in the films - first the main character, and then other characters. The replicants were calm about the chaos that was happening around, and only now the topic of their self-identification was finally addressed.

Remember the timid attempts at Retribution to advance the theme of motherhood and caring for a girl who thought Alice was her mom? Forget about this problem and the girl. The new film suddenly made a turn to religiosity, which looks wild in the series.

Six films with a decent box office. And every time the public manages to sell “the same”, but “in a new way”. How do they do it ?! Even at the color scale level: the first film is seen in scarlet colors - a flickering Alice dress in the dungeons of Umbrella Corporation; the second - in pale blue - like the twilight of the destroyed Raccoon City; the third - the brainchild of director Russell Mulcahy - in the yellow tones of the desert; the fourth in latex black, like tight-fitting costumes of Alice's clones; the fifth is white, like snowy expanses among the ice, where the heroes fight; The sixth part lost its unified color palette and acquired a dirty brown tint.

One of the advantages is the logical end of the entire 'mini-series Resident Evil. Some kind of semantic component is introduced into the plot, they give answers to questions hanging throughout several films. Also, this picture is the debut of the daughter of M.Jovovich and P. Anderson, in the role of the red queen and very good.

Almost throughout the film, I had a feeling, as if director Paul V. S. Anderson was in a hurry to finish it as soon as possible. On the one hand, I liked that the director did not delay the development of the action, and literally from the very first minutes the action begins. I also liked the change in the style of the film. On the other hand, the chaotic dynamics and chaotic development of the action hardly allow the viewer to plunge into the atmosphere of the film since the main emphasis is on ostentatious absurd entertainment.

More info about RESIDENT EVIL: THE FINAL CHAPTER in my Querlo chat. Check it if you are interested in Resident Evil franchise's last part. I share my thoughts on these topics:

I invite you to check RESIDENT EVIL: THE FINAL CHAPTER on Querlo (the link opens chat in a full-screen mode):

So, all debts are closed, all points are put. Of course, from the last part of Resident Evil, you expect more, primarily in terms of plot. Despite the general spectacle of battle scenes, which are already crammed with the entire franchise, the Last Chapter lacks the originality of the plot. The plot twists cannot be called predictable, but they were not impressed properly. I repeat only that one thing pleases only, that this is the long-awaited finale that fans have been waiting for for 15 years.

It's time to admit: Resident Evil is a phenomenon in the field of video game adaptations. One main character. Almost one director-inspirer (with a couple of exceptions). For all its shortcomings, films about Alice's adventures in the zombie country each time collected a large cash register and paid off at the box office. And every time it provoked the director to shoot another sequel.

There is also a share of our guilt in this: it is difficult to resist the temptation to see what was done this time with the famous video game series on the big screen and how the source was perverted.

The cinematic Resident Evil always went its way, balancing between total failure and magnificent view. The authors in each film came up with something new, organically weaving the most spectacular moments from video games into the narrative. Some considered this whole bacchanalia an unacceptable fanfiction, while others simply watched where the franchise would eventually come. 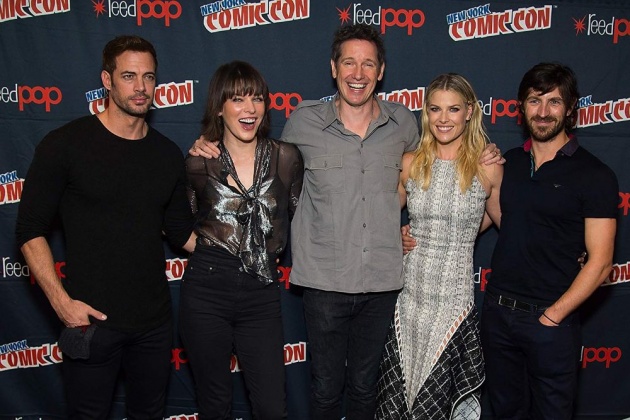 When you watch Resident Evil, you are waiting for action, effects, drive, zombies and many fights. You are waiting for the perfect main character. If you watched all the parts and it clings to you with something, then this film is also yours. Of all the cinema diversity, the Resident Evil occupies its certain persistent niche, on which it adequately holds. Here you do not need to look for originality and a twisted plot. This is a beautiful action movie.

In general, RESIDENT EVIL: THE FINAL CHAPTER turned out better than its predecessor, the filmmakers drew a line to completion, revealed some secrets related to the characters, returned the viewer to where it all began. From a visual point of view, The Last Chapter turned out to be a spectacular, gloomy, tough part, but for me, the best part was the one that came out in 2002.