Hollywood machine is running. The average viewer will more easily name directors from the American system than any of the national filmmakers. This statement applies to widespread European culture.

Universal stories work differently in Asia, including the use of censorship decisions, when the competent authorities decide if the creation will be accessible for the masses. This is covered by the protection of morals, tradition, children's psyche. As a result, a viewer is formed with the necessary taste.

In Japan, South Korea, and India, people like to watch local movies. There, the audience easily names their stars. China is staying separately. The Government of China is trying to create a unique society and audience. Allowing them to film system movies at home, the Chinese authorities are constantly encouraging the creation of response films. The slogan “our answer to Hollywood” comes from every second film. Using the achievements that the entertainment video industry has been pursuing for decades, Chinese cinema gives birth to successful films. Let it be only at the local level, but still, there will be enough market. Already now there are more films created than in all of Europe.

Directed by Frant Gwo and loosely based on a novella by Liu Cixin, the movie offers an exciting, post-apocalyptic take on the future, from subterranean cities to sub-zero surfaces enveloped in ice. Beyond the CGI magic and meticulously constructed sets, The Wandering Earth’s global disasters could be interpreted as an analogy for the current environmental issues we’re facing.

One of the brightest response films was the film THE WANDERING EARTH. More than 300 million in cash, leadership at the box office for a month. As the culmination, Netflix global rented purchase. European culture is watching the achievements of Chinese film production on a streaming service.

What THE WANDERING EARTH  is all about?

It looks like a retelling of childhood films with Bruce Lee, Sylvester Stallone, Arnold Schwarzenegger: “And here he bangs, bangs! Then a foot to the chest...".  The pleasure from viewing is close to a teenager's.

The film is a fantastic assumption for solving dramatic problems. The story is logical and fascinating. To thank for this we should the author of the novel The Wandering Earth Liu Cixin. The novels of the writer are focused on the place of China and the inhabitants of the Middle Kingdom in the future.

An alternative view, different from the American-Hollywood one, is necessary on the heroic narrative in the modern post-truth world. Other countries are mentioned more than once in the film, but the United States is excluded.

We see a lot of special effects. Their level is far from the usual for cinema films. In THE WANDERING EARTH, the picture is not realistic. The image is closer to computer games than to films. I managed to overpower myself and enjoy watching.

Acting looks unaccustomed too. Excessive emotionality, screams, strange emotions - a set for each character. It looks hyperbolized. Most importantly, the authors retain the logic in motivation and action.

Comfortable viewing is disrupted by the introduction of new characters. New characters are added and added as in the series. It saves that the film’s focus is on events, not on personalities in unusual circumstances. Heroes are more functions than full-fledged characters. And it seems to appear on the screen to display the diversity of the created world.

THE WANDERING EARTH bribed me with a solution of a mixture of individuality and collective. This film is significantly different from the usual repertoire. The individual does not become the only one able to find a way out of the situation.

For more details about THE WANDERING EARTH, please check my Querlo chat and find info on these topics:

Let's chat about THE WANDERING EARTH (the link opens chat in a full-screen mode):

For many years, Chinese cinema has been doing fine in its separate world, not caring, whether it is interesting to viewers in other countries. Most often, local films turn either to real historical events or to specific folk mythology - topics that are in absentia close to their audience and not very clear to others.

In this sense, THE WANDERING EARTH, which is touted as the first Chinese sci-fi film in history, had the best chance of starting a big Chinese movie in the West. But after a short limited rental in the United States and several other countries, the picture settled on Netflix, where it would be difficult for it to realize its ambitions. For a large-scale blockbuster with impressive fees of $ 700 million, THE WANDERING EARTH is surprisingly little discussed in the public field.

Striking a balance, I dare to say that the film is cool, with directing, visualization, and intrigue at a very, very decent level. On top of this, there is the eternal conflict between fathers and children, the absence of not funny American jokes, and the sober Russian astronaut saving the world with the Chinese brothers, and an excellent soundtrack. 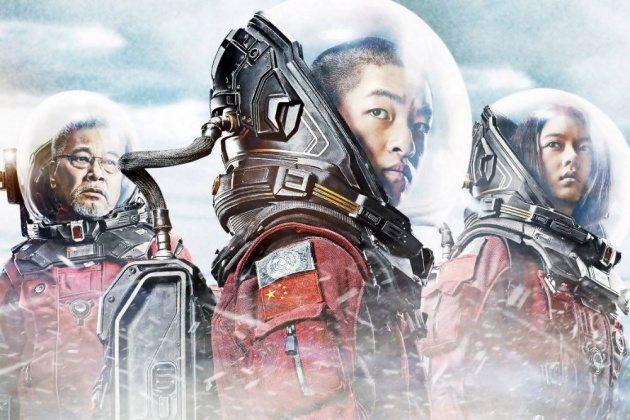 The film will appeal to all fans of space odysseys, large-scale disasters, and adventure drama with touching to tears moments. The film deserves to be seen, appreciated and recommended to others. This is an interesting adventure story as part of a fantastic action game.

In general, if you discard all the seriousness and ridicule concerning an incredibly fabulous plot, then you will get an excellent charge of emotions and positive impressions. Let's everyone enjoy watching.