junction. The p-n junction joining the base region and the collector region is called the

base-collector junction, as indicated in Figure –1(b). A wire lead connects to each of the three regions, as shown. These leads are labeled E(emitter), B(base), and C(collector). The B(base) region is lightly doped and very thin compared to the heavily doped emitter and the moderately doped collector regions. Figure –2 shows the schematic symbols for the npn and pnp bipolar junction transistors. 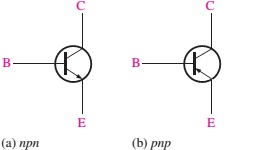 Figure –3 shows a bias arrangement for both npn and pnp BJTs for operation as an amplifier .Notice that in both cases the base-emitter (BE) junction is forward-biased and the base-collector (BC) junction is reverse-biased. This condition is called forward-reverse bias.

For operation of transistor, let’s examine what happens inside the npn structure. The n-type(heavily doped) emitter region has a very high density of conduction-band (free) electrons, as indicated in Figure –4. These free e's easily diffuse through the frwd bias BE junction into the lightly doped and very thin base region, the wide arrow. The base has a small number of  holes. A low %age of total number of free electrons entered into the base region combine with holes and move as valence electrons through the base region and into the emitter region as hole current. 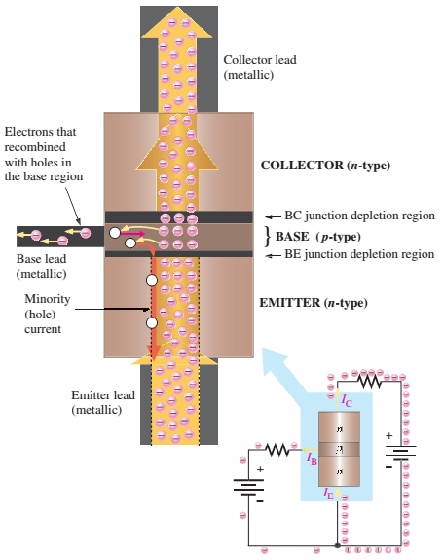 How I Entertain Myself While Working at Home?

Image credits: Jean Beltran via bitLanders It's been two months now since I started working from hom…