Bizarre and Exotic food, would you dare?

Please be a traveler, not a tourist. Try new things, meet new people, and look beyond what's right in front of you. Those are the keys to understanding this amazing world we live in"--Andrew Zimmern 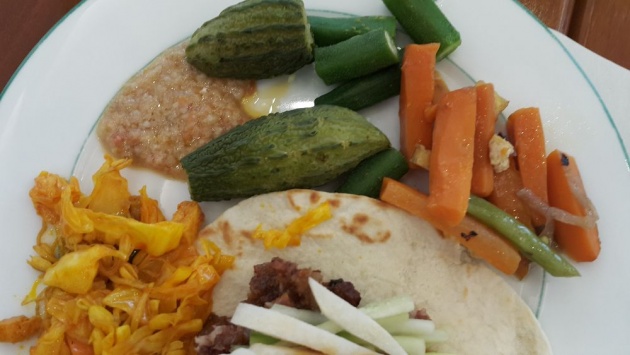 Will you dare to eat something that you never thought It can be eaten?

One of the shows I always watch is Bizarre Foods with Andrew Zimmern. The show is show in travel channel but locally, it is being shown in TLC, a cable channel. The show is being hosted by Andrew Zimmern, one of the person I look up to in culinary world. He is an American chef, food writer and teacher. One of the person that inspires me in trying new things in terms of food, his line that I always kept is, "If it looks good, eat it."

In the show Bizarre Foods with Andrew Zimmern, it shows about the regional cuisines from around the world, that some or I should say most of it can be considered "bizarre" or "exotic" or "disgusting". But it is through knowing those kind of food that you get to know more of the people around that region, their lifestyle, their culture and their tradition. Andrew Zimmern never hesitates to have a taste of those, though I remember one show that he don't have that much love for durian.

But how can you say that a food is bizarre, exotic or disgusting?

Bizarre is defined as unusual, very strange, peculiar or odd. Exotic is defined as close as bizarre, for it is an unfamiliar, but exotic foods can be unusual type of meats, fruits, vegetables or spices or maybe the way the food was prepared.

Here in the Philippines, there are a lot of what some can consider bizarre, strange or exotic. 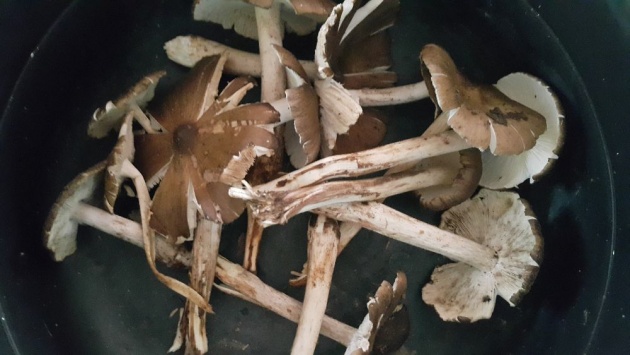 Bizarre  and Exotic or Unusual foods in the Philippines.

The Philippines is not just rich in history and culture, the country is also rich with delicious food. Food that has all the basic taste, sweet, sour, spicy, salty, bitter and "Umami" or savory. We love our food and definitely love to eat. Too much of it that our "usual" food can be strange to the sight and palate of some people, whether a fellow Filipino or a foreigner. and here are some of those "food".

1. Balut/Balot. This is unfertilized duck egg, boiled and eaten from the shell. This one of the most common street food in the Philippines. Some wanted to have it with a beer(but it can be deadly), some wanted to eat it with salt and spiced vinegar(the best). The balut egg is like a complete meal, it has a soup that you can sip, and that protein egg with that developing embryo, and it is rich in calcium too.

The egg is incubated for a certain period, 15-17 days is the best for me, for it will be "balut sa puti" or balut in white since the developing embryo is not that visible and has that white wrap on it.

And I remember that episode of Fear Factor, where contestants have to eat one and with the look on their face, I know they are disgusted while me was like, YUMMY! 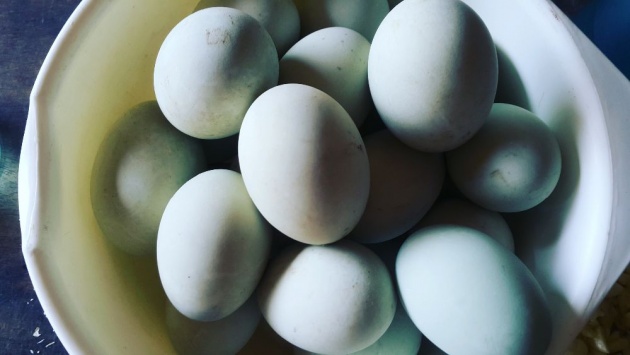 2.Rice field crickets or Kamaro in Pampanga or Arra-rawan for us Ilocanos. So, this is insect. Seeing insect is not fun to some, and eating one can be disgusting. For us Ilocanos, this is one of the best. It tastes nutty and savory, and has that sweet aftertaste. This is not available in our area all year round, so the price of a piece can be quite expensive, around $0.025 or more than a peso each.

Preparing the rice field crickets are easy to do. Blanch or boil them first before you can cook them. We can either cook them in the famous adobo or sauteed in onions, garlic and tomatoes. How we love to eat them with rice or some have it with their beers.

Did you know that eating 100 grams of crickets has 121 calories? There are 49.5 calories come from fat. They are a great source of protein, and like balut, they are also rich in calcium that is good for our bones. 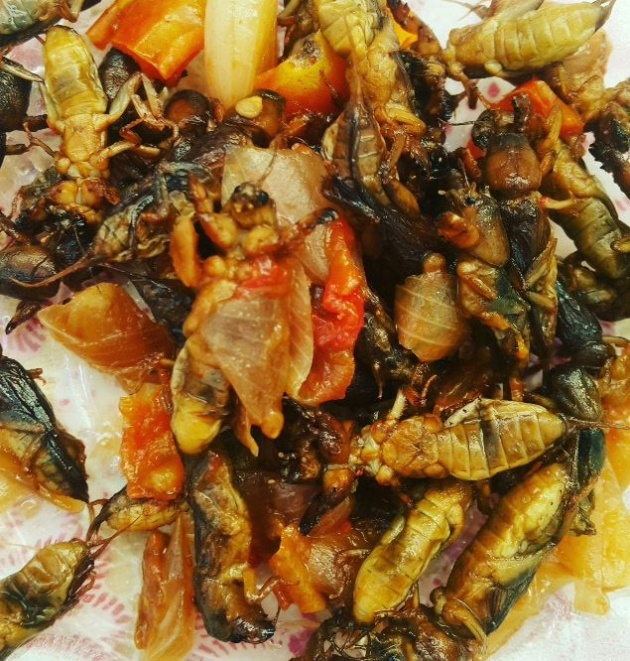 3.  Mangrove worms or wood worms or Tamilok of Puerto Princesa, Palawan. This is actually a mollusk and not a worm that is among the group of saltwater clams without shell. These are also called shipworm or sea termite. Tamilok is one of the favorite of the people that live around the mangrove areas of the country. And I remember one episode of Bizarre Food with Andrew Zimmern, where Andrew joined the locals and have a taste of tamilok, being dipped in calamansi. 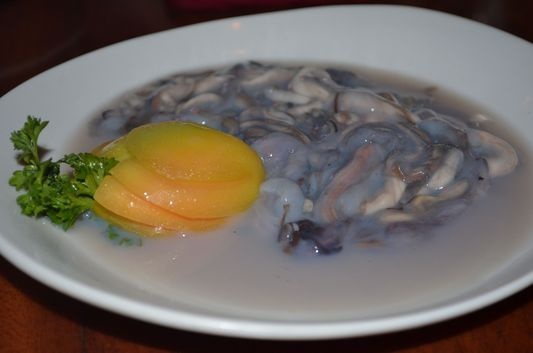 *Image is credited to www.sexyfuntraveler.com

4. Papaitan. This an Ilocano dish. This is a soup dish where there the soup has beef/goat innards, and not all people can be a fan of eating guts, blood cakes, pancreas, intestines. And the one that makes it bitter can be either from bile or from undigested grasses that has been extracted from the beef's intestines. Definitely not a good thing to imagine but we really do that, but we usually cook it. 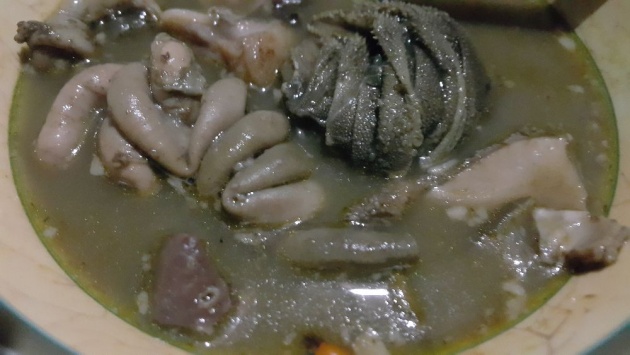 5. Soup Number 5. The name sounds harmless until you get to know what is in there. The soup number 5 is a soup that is made out of a bull's testes or penis and believed to have aphrodicsiac properties. This warm and hearty soup resembles of that beef-stew. For some, it is not just unusual, but also it can be not that a healthy soup. 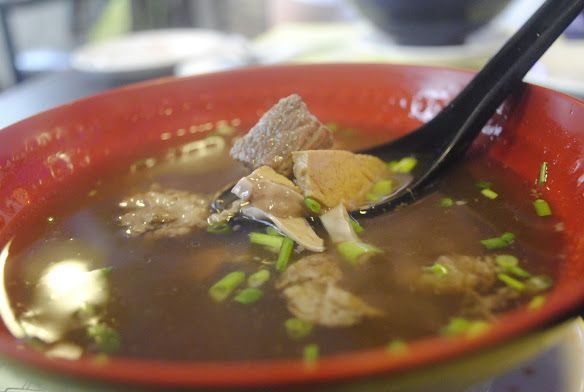 *Image is credited to www.keywordsuggest

There are actually more of the food that can be considered strange to some. From those grilled chicken intestines that we locally call "isaw", or of that blood cake on bamboo skewer and grilled or betamax, or that chicken head that we call helmet, yes, they can be disgusting to some, but it shows how we use everything, instead of throwing them, we make use of it and still fill our stomach.

It also shows how we love to eat and make most of every part of an animal or what is available. There is more than just what your eyes are seeing, somehow the food tells you more of the lives of the people who are eating those kind of food.

Hope you can try some and instead of that feeling of disgust, savor it and enjoy.

Have you heard about sea cucumbers? Yes? Probably because the Chinese consider it as a delicacy righ…