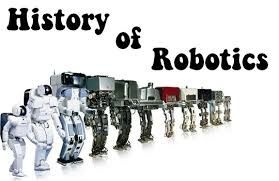 1968
Stanley Kubrick makes Arthur C. Clark's, 2001: A Space Odyssey into a movie. It features HAL, an onboard computer that decides it doesn't need its human counterparts any longer. Hear HAL by clicking here.

1970
Stanford University produces the Stanford Cart. It is designed to be a line follower but can also be controlled from a computer via radio link.

1974
Victor Scheinman forms his own company and starts marketing the Silver Arm. It is capable of assembling small parts together using touch sensors.

1976
Shigeo Hirose designs the Soft Gripper at the Tokyo Institute of Technology. It is designed to wrap around an object in snake like fashion.

1977
Star Wars is released. George Lucas' movie about a universe governed by the force introduces watchers to R2-D2 and C-3PO. The movie creates the strongest image of a human future with robots since the 1960's and inspires a generation of researchers.

1979
The Robotics Institute at Carnegie Mellon University is established.

1979
The Stanford Cart is rebuilt by Hans Moravec. He adds a more robust vision system allowing greater autonomy. These are some of the first experiments with 3D environment mapping.

1980
Seymour Papert publishes Mindstorms: Children, Computers, and Powerful Ideas where he advocatesconstructionism, or learning through doing.

1981
Takeo Kanade builds the direct drive arm. It is the first to have motors installed directly into the joints of the arm. This change makes it faster and much more accurate than previous robotic arms.

1982
"A new life awaits you on the Off-World colonies." Blade Runner is released. This Ridley Scott film is based on thePhilip K. Dick story "Do Androids Dream of Electric Sheep?" and starred Harrison Ford as Rick Deckard a retired Blade Runner that hunted Replicants (or illegal mutinous androids).

1986
LEGO and the MIT Media Lab colaborate to bring the first LEGO based educational products to market. LEGO tc Logo is used by in the classrooms of thousands of elementary school teachers.

1986
Honda begins a robot research program thats starts with the premise that the robot "should coexist and cooperate with human beings, by doing what a person cannot do and by cultivating a new dimension in mobility to ultimately benefit society."

1989
A walking robot named Genghis is unveiled by the Mobile Robots Group at MIT. It becomes known for the way it walks, popularly referred to as the "Genghis gait".

1989
At MIT Rodney Brooks and A. M. Flynn publish the paper "Fast, Cheap and Out of Control: A Robot Invasion of the Solar System" in the Journal of the British Interplanetary Society. The paper changes rover research from building the one, big, expensive robot to building lots of little cheap ones. The paper also makes the idea of building a robot somewhat more accessible to the average person.

1992
In an attempt to build a radio controlled vaccuum cleaner Marc Thorpe has the idea to start a robot combat event.

1992
Dr. John Adler came up with the concept of the CyberKnife a robot that images the patient with x-rays to look for a tumor and delivering a pre-planned dose of radiationto the tumor when found.

1993
Dante an 8-legged walking robot developed at Carnegie Mellon University descends into Mt. Erebrus, Antarctica. Its mission is to collect data from a harsh environment similar to what we might find on another planet. The mission fails when, after a short 20 foot decent, Dante's tether snaps dropping it into the crater.

1994
Dante II, a more robust version of its predicessor, descends into the crater of Alaskan volcano Mt. Spurr. The mission is considered a success.

1996
A RoboTuna is designed and built by David Barrett for his doctoral thesis at MIT. It is used to study the way fish swim.

1996
Chris Campbell and Stuart Wilkinson turn a brewing accident into inspiration at the University of South Florida. The result is the Gastrobot, a robot that digests organic mass to produce carbon dioxide that is then used for power. They call their creation the "flatulence engine."

1996
Honda debuts the P3, the fruit of its decade long effort to build a humanoid robot.

1997
The first node of the International Space Station is placed in orbit. Over the next several years more components will join it, including a robotic arm designed by Canadian company MD Robotics.

1997
The Pathfinder Mission lands on Mars. Its robotic rover Sojourner, rolls down a ramp and onto Martian soil in early July. It continues to broadcast data from the Martian surface until September.

1998
Tiger Electronics introduces the Furby into the Christmas toy market. It quickly becomes "the toy" to get for the season. Using a variety of sensors this "animatronic pet" can react to its environment and communicate using over 800 phrases in English and their own language "Furbish".

2000
The Battlebots event is held in Las Vegas, Nevada.

2001
In August, the FDA clears the CyberKnife to treat tumors anywhere in the body.

2004
Jan. 4th - After six minutes of holding our breath (during EDL) as it burned and bounced its way to the red planet the robot rover Spirit lands on Mars.