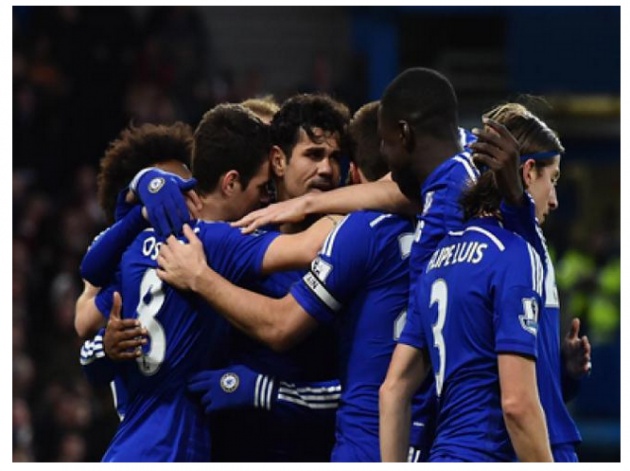 Chelsea took sole possession of first place in the Premier League table after they beat Newcastle United 2-0 on Saturday and Manchester City drew 1-1 at Everton.

Chelsea began the day dead-level with City, but with the defending champions dropping points for only the second time in 10 matches, Jose Mourinho's side moved two points clear.

Newcastle had beaten Chelsea 2-1 in the reverse fixture and despite still being without a manager following Alan Pardew's departure, they threatened to pull off a repeat in the first half at Stamford Bridge.

Petr Cech was deputising in goal for Chelsea due to a finger injury to Thibaut Courtois and he had to save from Remy Cabella and Yoan Gouffran, while Moussa Sissoko slammed a shot against the post.

Chelsea lost Cesar Azpilicueta to an apparent groin injury in the 37th minute, but they went ahead six minutes later when Oscar tapped in Branislav Ivanovic's cross after Willian took a quick corner.

Mourinho's team were far from their best, but they added a delightfully constructed second goal just before the hour, with Diego Costa gathering a clever back-heel from Oscar and drilling in his 15th goal of the campaign.

"It is important that when you don't play as well as you'd like to, you still get the result."

At Goodison Park, Everton enjoyed the best of the first half against City, with Seamus Coleman hitting the bar.

City went ahead in the 74th minute when Fernandinho helped a deflected shot from David Silva over the line with his head, but Steven Naismith equalised four minutes later, glancing home a free-kick from Leighton Baines.

"In the first half we had clear chances," said City manager Manuel Pellegrini, who welcomed Sergio Aguero back from injury.

"In the second half Everton improved and had a chance to draw and did so. If you said at the beginning you are going to draw at Everton away, maybe it is not so bad."

Serbian winger Lazar Markovic scored his first league goal as improving Liverpool closed to within four points of the top four by winning 1-0 at Sunderland, who had Liam Bridcutt sent off for two bookable offences.

"Our confidence is returning," Liverpool manager Brendan Rodgers told BT Sport. "This is a team that gets better and better as it goes on. It is a young group, but they are developing very well."

Tottenham Hotspur can move into the top four if they win at Crystal Palace later on Saturday, with third-place Manchester United and fourth-place Southampton facing off at Old Trafford on Sunday.

West Ham United spurned a chance to climb to fifth place after being held to a 1-1 draw at Swansea City.

Andy Carroll put West Ham ahead in the 43rd minute with a fine effort, chesting down a high ball and then dancing across the box before slamming a left-foot shot into the top-right corner from 15 yards.

But Swansea equalised in the 74th minute when a header from France striker Bafetimbi Gomis hit the post, struck West Ham midfielder Mark Noble and rebounded into the net for an own goal.

Gomis celebrated by displaying a France flag in tribute to the victims of this week's Islamist killing spree in Paris.

Burnley climbed out of the relegation zone and dragged Queens Park Rangers into the bottom three with a 2-1 home win over Harry Redknapp's side.

Scott Arfield's opener was cancelled out by a penalty from former Burnley striker Charlie Austin, but Danny Ings gave the hosts victory in the 37th minute by rolling the ball past Rob Green after a neat piece of control.

Bottom club Leicester City closed to within two points of safety by winning 1-0 at home to Aston Villa, with Paul Konchesky slamming in the only goal in first-half stoppage time.

Leicester's Matty James and Villa's Ciaran Clark were sent off in added time after clashing in the centre circle.

The Pel movie trailer just dropped, and we're pumped After a series of delays, IFC Films has release…

COPA AMERICA Football is the most popular sports and populist, does not see caste status, high state…

How to become a professional footballer