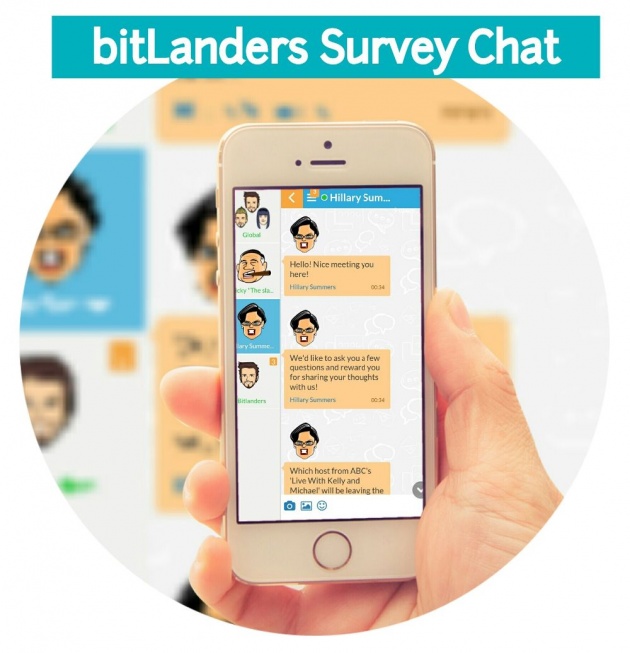 Hi there! This is Arrya once again and I am writing my second blog about the new bitLanders Survey Chat on Global. If you have an available time, kindly check my first blog here. Since I became member of bitLanders, I've been staying on global chat and spending my time there for 4 hours up to 8 hours a day. I can't really help myself, it's very addicting! Hahaha.. Perhaps it is something with my personality that makes me want to just keep talking with my lovely friends including lookup, khokarjamal69, haraka, wanderfulsoul and toshi-warraich. In case you don't know them, they are those members who are well-known on bitLanders or in other words they are the top performing users on the leaderboard. Unfortunately, I am not included there but having them as my friends make me noticeable sometimes. Just kidding! I will be sure to follow them as soon as possible. Anyway, I can still remember when I told them these words few months ago.

I wish we could earn by chatting here.

It was supposed to be a joke but it's a good news that bitLanders launched the survey chat to provide another opportunity to maximize the earnings.

Okay so.. first and foremost, I am going to tell you about the Global Chat located at the bottom, right side of the page.

What is the Global Chat?

Global Chat is a feature on bitLanders where you are able to interact and make friends with online members. It is divided into two: the public chat and the private chat. Public chat is an open chat with multiple people from everywhere in the world. It is a group conversation, where everyone can see what everyone else is saying. Private chat is where you can communicate to a specific person without anyone other than the recipient being able to see the message. To begin an instant message conversation, just simply tap the "users" icon in the top right corner of the chat and select the user's name. You can have many private chat rooms opened for individual user. 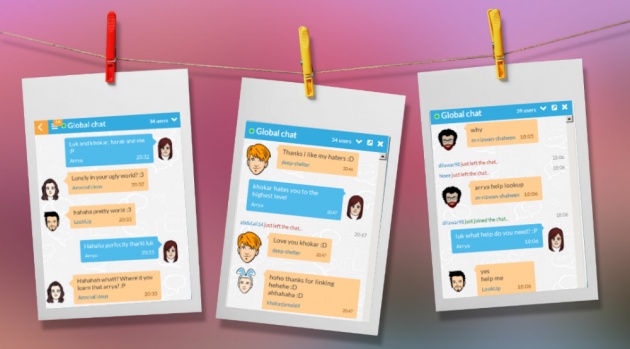 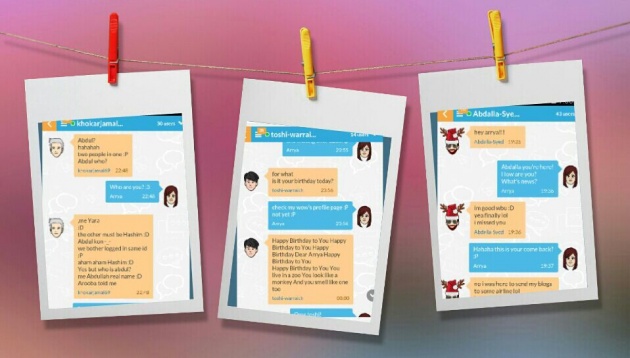 Some of us might not be interested on joining global chat because of two reasons; to get rid of those members who are asking for deals and this spamming thingy. However, Micky-the-slanded-salerno posted on his blog and on global chat the news about banning users for spamming with buzz/sub requests and the English-speaking zone only on public. As a matter of fact, spammers are getting less and less everyday. The following rules have been implemented such as the rules to avoid suspension or ban and the rules about content. I am highly favorable on these rules to ensure fair play for all users of bitLanders.

Back to the main topic. As I mentioned above, there is a new feature on bitLanders; the Survey Chat. I am going to discuss about it step by step.

How does the bitLanders Survey Chat work?

Once you join the chat, an automatic message from Hillary Summers will immediately appear asking you to take part in the survey. Hillary Summers? Yes, You read it right! You will not only see Hillary during the result of your review, rather you will see her everyday on global chat. To prove it, please take a look of a screenshot shown below. 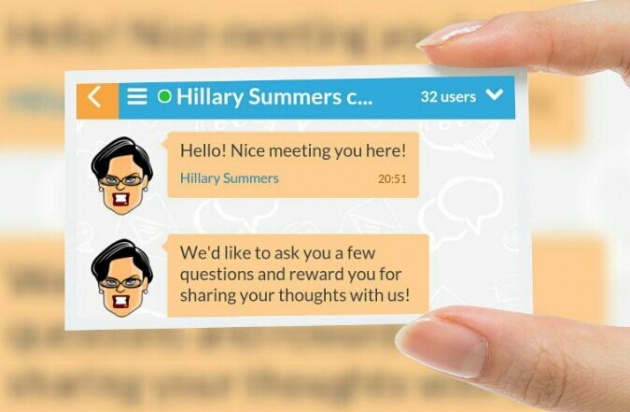 The first survey question I got was about the 2016 Cricket World Cup. Did you watch it? If yes, why not share it to Hillary. Frankly, I didn't watch the cricket world cup match but the news travels fast so I ended up knowing it. 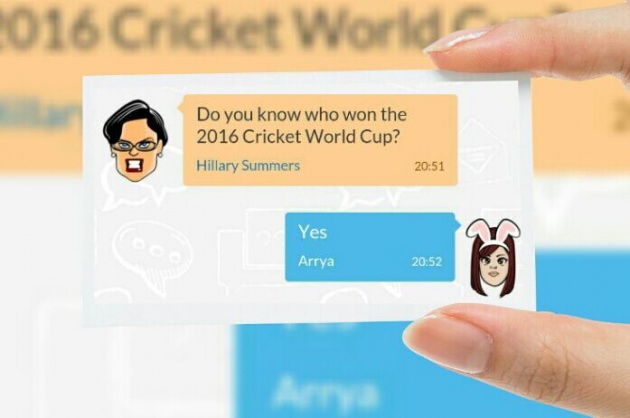 But wait! It's not that you only have to answer the questions. By each answer you give, you will earn 10 bitMiles Loyalty Points (BM). Please note that whether your answers are correct or incorrect, you will still be rewarded. Doesn't it sound great? 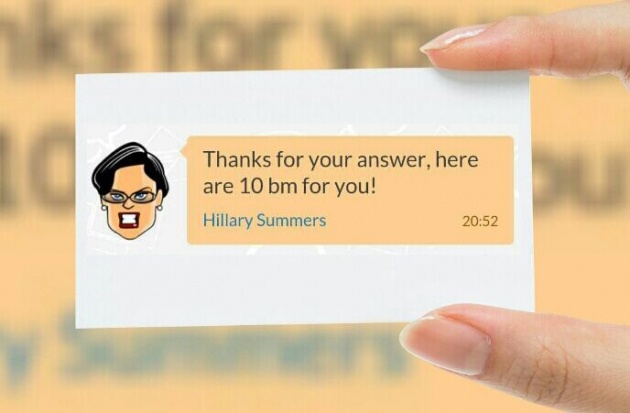 How much the total rewards will you get by answering the survey?

In my experience, the total survey questions I got from Hillary for the first day was 31. Multiply each to 10 bitMiles Loyalty Points (BM), the equivalent of my rewards were 310 bitMiles Loyalty Points (BM). The number of questionnaire is not the same every day, you might get more or less. Aim to come back the next day and answer the new survey questions for more bitMiles rewards.

To check your rewards, go to My Rewards section, tap the Details and look for bitMiles applications and games as you can see below. You can spend your rewards on Bitlander's shop, donate by joining bitCharities or withdraw using payza and paypal account. 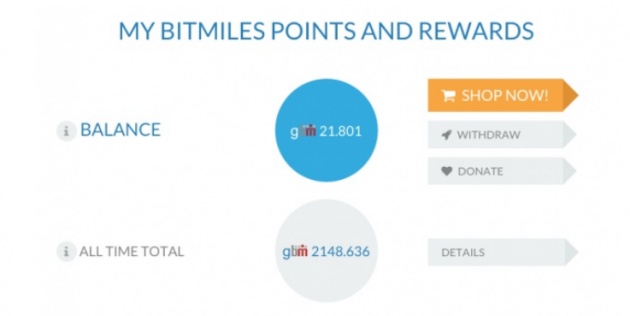 Image source: snapped by me

How to earn more aside from answering the survey chat?

After you finish answering the survey, write an original blog about the new reward topic bitLanders Survey chat and discuss your own experience about it. Once it is published, tap the "Submit for review" at the top left of the page. You must have at least 10 gems on your account for you be able to submit it. Bear in mind that, you need to follow the rules carefully. All content submissions must be an original, unique work of your own to avoid plagiarism. For further information, check Micky-the-slanted-salerno's blog bitLanders Suvey Chat and get inspired by their own blog as well. In addition, you can check a 5-star blog of the top 1 user, LookUp. 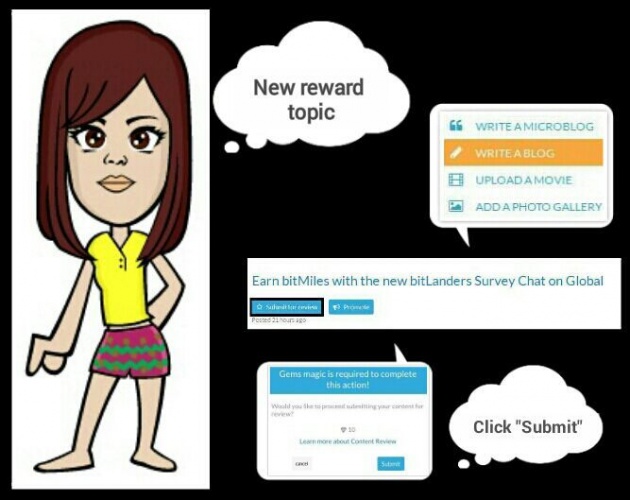 They are also giving every user a chance to create their own survey campaign at bit-miles.com. You can email  them at info@bitlanders.com. Please note that the questions are limited to 150 characters and answers to 15 characters as Micky discussed on his blog.

My own experience on answering the survey chat

I was wondering when Hillary Summers would appear on Global chat. What shocked me was she finally showed herself on Global Chat on April 09, 2016. I felt like I was very excited answering the first survey and had no idea what was coming next. It was indeed surprising to those users who were not updated regularly, like me. I feel much more motivated to write about this new reward topic because I enjoyed seeing Hillary on global chat and at the same time, participating in the survey and openly share my opinion and thoughts with her. She was the only person who conducted the survey for the first week (If I am not mistaken) but after that, Micky and Bitlanders have joined the survey chat as well. They have also increased the survey rewards from 10 bitmiles to 30 bitmiles over the last 2 weeks. The more the better, right? 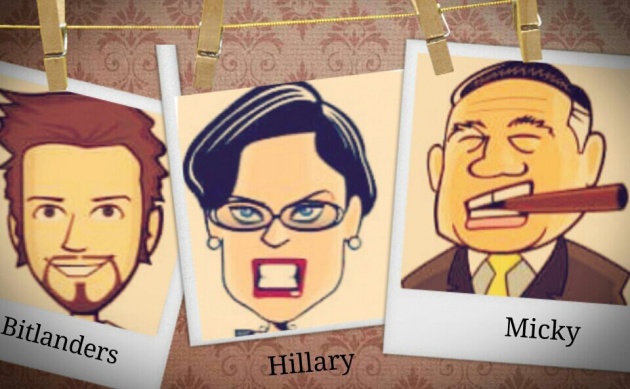 I am going to show you two separate videos of my survey experiences, one with Hillary Summers and the other one is with Micky "The Slanted" Salerno and Bitlanders. Please take a look on videos shown below.

Video source: recorded and edited by me using icescream app and movie maker

Video source: recorded and edited by me using icescream app and movie maker

My opinion about the Survey Chat feature

I like the variety of fun, impersonal survey on global chat. They are interesting and easy to understand. Its way of surveying is very useful to me, user friendly with relevant topics. It really helps me to think about how to answer certain questions. Although the rewards are not high but at least they are attempting to pay users for their time. And it's not overly burdensome for the users in terms of survey length and difficulty. It can be done on mobile phone, which is hassle free, available anytime and from anywhere.

I hope you're all as excited for the new Survey Chat feature as I am! So guys, what are you waiting for? Go to chat and start answering questions from Bitlanders, Hillary and Micky. You'll be earning Bitmiles. 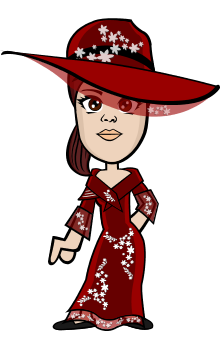