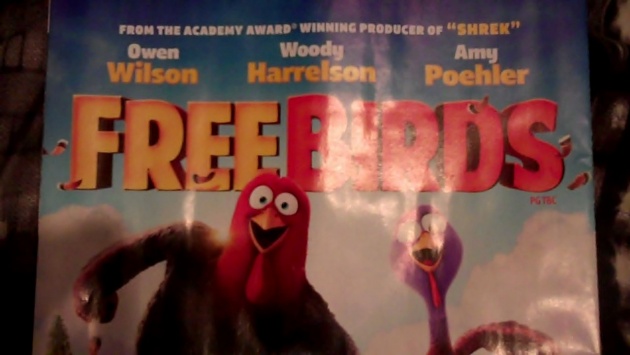 The animated film FREE BIRDS, directed by Jimmy Hayward (whose credits include HORTON HEARS A WHO and JONAH HEX – more like JONAH SUCKS, if you ask me) has done respectable business in its first three weeks of release in the US. It is the first big budget computer animated film in 3D not to be produced by the Big Five: Blue Sky, Disney Pixar, Dreamworks SKG, Illumination Entertainment and Sony Pictures Animation. It boasts a script by Scott Mosier, who also lends his voice to one of the minor yet pivotal characters, who is one half of View Askew, or Kevin Smith’s production company. I expected to hear Smith’s voice in there somewhere but he was more silent in this than Silent Bob; that is, he’s not in it. I went to a packed screening in a South London multiplex on a Sunday afternoon, my first children’s film in quite some time because I’m fed up of the little tykes pulling at my scarf. (‘Of course it’s real – oh, my beard, that’s real too.’) What shocked me was the complete absence of laughter. So it occurred to me: maybe children need to be primed to see it by their parents. I imagined the following conversation between a father and a little girl.

KIMMY: To THE DAY OF THE DOCTOR in 3D? But we can just watch it on TV.

DAD: No, something else. A cartoon!

DAD: Yes, FREE BIRDS in 3D. From the producer of SHREK!

KIMMY: Like that means something to me, I’m five.

KIMMY: I heard you.

DAD: Do you want to know who is in it?

KIMMY: I’m like five, so unless it’s Dora from Dora the Explorer or Iggle Piggle it really isn’t going to mean anything to me.

KIMMY: Can I have a biscuit?

DAD: Not the whole story. Just enough to get you interested.

KIMMY: But I want a story.

KIMMY: Say ‘once upon a time’.

DAD: OK. ‘Once upon a time there was a turkey named Reggie who lived on a farm. He was a very skinny turkey because he didn’t want to get fattened up because he knew that fattened up turkeys faced the axe.’

KIMMY: They got voted off X FACTOR?

DAD:  No, they had their heads cut off.

DAD: Are you like the Bruce Willis of the cat world?

KIMMY: I don’t really understand that.

DAD: ‘Reggie tried to get the turkeys to stay away from the corn, but they were addicted. They loved corn. They had no interest in being separated from their beloved fresh yellow corn.’

DAD: What do you know about junkies?

DAD: You little button. ‘One day there is a huge light outside the barn. We hear the whirr of helicopter blades.’

KIMMY: I don’t think so.

DAD: My mimickry has a limit.

KIMMY: Can I jump on your shoulders and you do helicopter blades?

DAD: No, it’s not in the story. ‘So who do you think gets out of the helicopter? The President of the United States!’

KIMMY: Isn’t his wife going to be President one day?

DAD: No, she has to be nominated by the Democratic Caucus.

KIMMY: Is that in Seaworld?

DAD: ‘Reggie is taken by some Secret Service guys.’

DAD: It’s people who do stuff but don’t tell you about it.

KIMMY: Like waiters. Mum says they spit in our food.

DAD: She said that?

KIMMY: Yes, she says ‘it’s no use crying over spit milk.’

DAD: Spilt milk. ‘Reggie thinks he’s for the chop but the President is after one turkey to pardon.’

DAD: No, it’s an act of clemency, like sparing a convict the electric chair, or cancelling ALCATRAZ.

DAD: ‘But the President doesn’t want to pardon Reggie – he’s too thin!’

KIMMY: So is the message here that thin people aren’t worthy of our sympathy or support?

DAD: That’s your mother talking. ‘The President wants another turkey, but then his daughter starts crying. Blub. Blub!’

KIMMY: There, there Dad, they’ll bring ALCATRAZ back. They’ll be a Kickstarter campaign, you’ll see.

DAD: ‘So Reggie becomes the pardoned turkey after all.’

KIMMY: Should I be cheering?

DAD: ‘Reggie is a very happy turkey. He gets his own television and watches a Mexican soap opera about El Solo Lobo.’

KIMMY: Is he in STAR WARS?

DAD: ‘He even gets to order pizza.’

KIMMY: Yay, pizza. Wait, you say we can only have that on special occasions.

DAD: Well, for Reggie every day is a special occasion.

KIMMY: Isn’t he sad to be away from the farm?

DAD: No, because the female turkeys ignore him.

KIMMY: Yes, but he could have a best buddy, like Timon has Pumba.

DAD: You’re confusing the issue. ‘The President’s daughter is excited to have Reggie as a pet but then she gets bored and falls asleep.’

KIMMY: Is that a hint?

DAD: No, it happens at least twice in the movie.

KIMMY: I’m getting bored but I’m not tired.

DAD: ‘Then a mysterious intruder breaks into the White House and snatches Reggie away.’

KIMMY: Is it James Woods?

DAD: No. ‘It’s another turkey who recruits Reggie for a secret mission.’

DAD: No, by Woody Harrelson. ‘The mission is to break into a protected compound, steal a time machine, go back to 1621 and stop Thanksgiving.’

KIMMY: I thought it was an address like Park Avenue. Does Carrie live there?

KIMMY: Or Samantha? Or how about the really annoying one?

DAD: No. ‘Anyway, they break into the secret compound and enter a shed, which has a secret elevator that leads to an underground base.’

KIMMY: It must be really bad for these underground bases with all that fracking.

KIMMY: I know it sounds kind of rude.

DAD: ‘So they get into the time machine which is called STEVE.’

KIMMY: Like in CLOUDY WITH A CHANCE OF MEATBALLS.

DAD: Yes. They didn’t think it through.

DAD: It’s an American holiday. A bit like Christmas.

KIMMY: Do they have Christmas in America?

DAD: Well, they consume proportionate to the wealth they produce.

KIMMY: Is that why all the fat people live in America?

KIMMY: They want to stop Thanksgiving so they don’t get fat.

DAD: That’s not the point of the film.

KIMMY: That’s cool. I think everyone should have the same holiday.

DAD: But we must respect cultural differences.

KIMMY: That’s no excuse for double turkey. I thought holidays were supposed to be based on limiting the amount and type of food you eat in order to conserve it.

DAD: So FREE BIRDS. It’s a time travel movie about stopping turkey being eaten at Thanksgiving.

KIMMY: Is eating turkey bad, like not in cartoons?

DAD: No, if the birds come from sustainable farms and are fed organic crop and can wander free and enjoy a relatively happy life before, you know, we eat them.

KIMMY: Why do kids only sleep with stuffed replicas of species that they could not possibly keep? Like a giraffe or a bear or a panda?

DAD: You’re getting off topic.

DAD: That’s what you’ll find out when you see the movie.

KIMMY: Is it mostly set in the past?