Film Review: BIG EYES – the eyes are a window to the plot hole 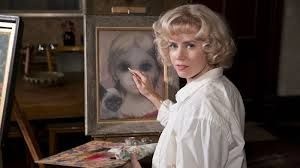 In Big Eyes, director Tim Burton returns to the west coast of America (San Francisco, rather than Burbank where he grew up) for a study of an artist, Margaret Keane (Amy Adams), nee Ulrich, who struggled in the late 1950s and early 1960s to establish an identity of her own. Margaret may be eccentric. She paints young girls, mostly modelled on her own daughter, Jane (Delaney Raye) with over-sized oval eyes – eyes that plead and glisten, moist with unformed tears. She also babbles in one scene about numerology, the importance of the number seven, to a visitor to her show. Her art became popular in the name of her husband, Walter (Christoph Waltz) who had a talent for foisting them on Middle America. Her art became phenomenally popular, though the New York Times art critic (Terence Stamp) described it as kitsch, the work of a hack.

Burton’s past work, in particular Edward Scissorhands, Charlie and the Chocolate Factory and Alice in Wonderland has elements of the fairy story, of characters separated from others with only their art as refuge. This is certainly the case with Margaret. In order to maintain the deception, Walter banishes Margaret to an attic room where she works in secret, even from her own daughter. One suspects that the real life Margaret is a good deal more eccentric than Adams depicts her, with her sad figures representing genuine despair.

Adams plays Margaret as a young girl in a woman’s body, innocent and naïve with Sandra Dee’s hair and figure. Unlike many women in Burton’s films, she’s a blonde. Big Eyes is only the second film, after Alice in Wonderland with a woman as the principal viewpoint character. Unlike Alice, Margaret does not undergo a journey of discovery in a topsy-turvy world. Her liberation is based on being unable to endure violence, of preserving herself and her daughter. She is a mother first.

The film charms us in its early scenes with the brightness of the scenery. The green hills that line the road as Margaret and her daughter head to San Francisco are a world away from the cold journey seen at the beginning of Burton’s last film, Dark Shadows. We feel for Margaret as she sits through a job interview, offering her portfolio. ‘You do know this is for a furniture company,’ says her prospective employer. In the next scene we see Margaret crouched inside a child’s cot, decorating it by hand, amongst many other painters doing the same thing. The craning camera reveals a benign production line.

Margaret meets her future husband whilst working as a portrait artist. She earns pennies but Walter, who hawks landscapes of the streets of Paris for $35 a head, sees potential in her. When Margaret fears she might lose her daughter, her ex-husband claiming she is an unfit mother, Walter marries her.

The deception that Walter practices feels curiously without danger, though Margaret raises an objection early on. He negotiates with a night club owner (Jon Polito) to rent some wall space. The scene when his Parisian landscapes and Margaret’s girl portraits are appraised on the way to the toilet is both comic and tense; we certainly want Walter to succeed.

Waltz gives Walter a cheese-ball grin, laced with the menace of his Austrian accent, which, curiously, no one comments upon. We see him offend the sensibility of a gallery owner (Jason Schwartzman) with his tiny, amateurish canvases, a world away from modern art. The film champions the kitsch and the mass produced; one senses Burton sees an element of his own work (yes, slightly kitsch and for mass consumption) in Margaret’s paintings.

The theatricality of Waltz’s performance takes the sting out of it, but it also deflects away from us discovering his true ambition. Is he just a lucky sham artist idiot or a serial swindler, forever on the make? The film suggests the latter; we are briefly introduced to his teenage daughter, who appears and disappears without much comment.

The film builds to a climactic trial – Margaret Keane verses the New York Times – which then turns into something else. It is narrated by a journalist (Danny Huston) with the film assuming the form of a puff piece. It feels like a piece of lightweight journalism, two thousand words to sum up a life, rather than a solid biopic. It is certainly one of Burton’s shortest films.

Big Eyes is finally anchored in the enigma of the paintings. Walter prepares for media interviews to explain his success by concocting a back story – the children represent lost orphans in post-war Europe. For Margaret, the pictures are ‘personal’. We see her paint a self portrait as an adult. The figure is thinner, the outward curve of the head gentler. The lines are still smooth but the figure feels concertinaed, squashed. Burton and his screenwriters Scott Alexander and Larry Karaszewski (who collaborated with him on Ed Wood) don’t want to explain them too much; creditably they want to leave the interpretation to the audience. It could be that the pictures don’t withstand close analysis; the same could be said of Big Eyes itself, which slips past you as you watch it barely leaving an impression.