Film Review: EASTERN BOYS – first you steal from my flat, then from my heart 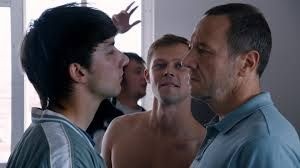 Eastern Boys is, by any estimation, a tough watch. In its documentary verité opening minutes, prefaced by the caption ‘No 1 Queen Street’, writer-director Robin Campillo focuses on a group of Eastern European young men, and one boy, hanging around Paris’s Gare Du Nord, ostensibly out to rob. They are an intimidating presence, observed from a distance as a flock of predators, disbursing at the sight of police or security, then regrouping. We don’t see anyone get robbed, but the threat is there. We feel for every wallet, every handbag and every laptop. We are well and truly creeped out. Into this crowd comes Daniel (Olivier Rabourdin), a predator of a different sort, looking a male prostitute. He fixes on one of the gang, Marek (Kirill Emelayanov) who agrees to come to his flat the next day. The next day – chapter two ‘the party at which I am a hostage’ – Daniel’s doorbell rings. Marek has arrived. He is buzzed in. But the boy on his doorstep is not the young man he approached. It is a child, threatening to cry rape. The doorbell rings again and Daniel admits the gang, who proceed to stage a party in his house, a party that can only end badly. It peaks at a hard to watch moment. Daniel, given a drink, dances as the gang make off with his possessions in a nearby waiting van, stripping the apartment bare. There is an argument between the leader and one of his gang. The gang member is smashed against the glass table. There is no escape and no recourse to justice. The real Marek appears and Daniel is crushed, betrayed. Even though his was a commercial transaction between two consenting adults – whatever you think of male prostitution – this hurts him deeply.

At least one audience member walked out during this extended sequence. However, Daniel lives. He starts to fill up his apartment (located near the airport). He dines with friends. Then his doorbell rings again, and Daniel receives a truly unexpected guest.

What follows is a relationship that develops from Daniel paying for sex – tastefully done, but still enough to inspire another walkout – to giving a man an allowance and an expensive phone (beware the phone) to a tender relationship of equals. Then there is a twist. To set his lover free, Daniel needs the young man’s passport. The final thirty minutes is a tense thriller, set in a budget hotel.

Campillo, who is the writing partner of Laurent Cantet (The Class, Time Out) as well as a noted director himself (Les Revenants) negotiates the genre shifts skilfully. He explores vulnerability with a compassionate lack of judgement, allowing us to be convinced of a new normal. At no point do we think Daniel is exploiting the boy – an obvious charge. The boy is discovering who he is, where he is and what he could become. At one point, a discussion about free dentistry appears to open up the world to him. When there is a fireworks display near the apartment building, we feel Marek’s pain. The scene gives his Chechen back story plausibility and vivid power.

Yet if Campillo is so compassionate, why does he not extend this to the rest of the gang? Mainly because the gang’s criminal behaviour is its own end. Marek has no escape. He could be trawling round the Gare Du Nord until he is forty. Meanwhile, the gang leader, raising a baby in a budget hotel, using his girlfriend for sex, is content to deal in contraband goods, with his extended band of ruffians who live, ostensibly, in a parallel universe.

The only thing wrong with Eastern Boys is the title. The film isn’t about the gang. Rather it is a tender love story. I might have called it Station Boys because there is a sense that both Daniel and Marek are stuck on a platform waiting for the 18:59 slow stopping service. Campillo’s realistic aesthetic, which threatens an absence of dialogue in its early scenes, pulls you in unexpectedly but agreeably. You root for this odd couple and pull for them during the tense and gripping end.

Reviewed at Soho Screening Room on a Thursday evening, 6 November 2014. With thanks to emfoundation PR