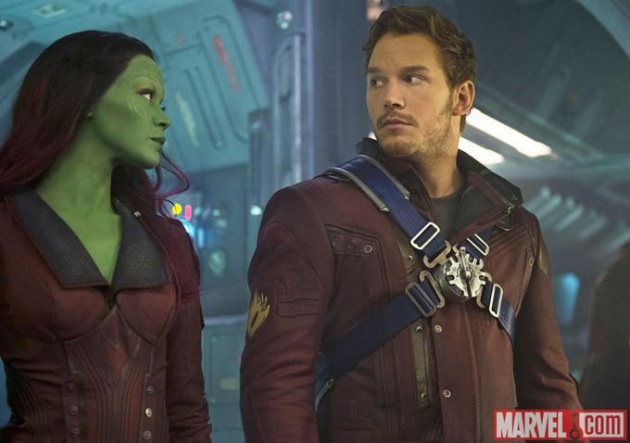 Almost inevitably, a film as universally praised as director James Gunn’s GUARDIANS OF THE GALAXY is going to disappoint. Watching it a week after release, I found myself picking holes in the plotting. For example, have you ever known a Sony Walkman last 26 years after frequent use? Tapes themselves certainly don’t last that long. Would an eight year old kid really idolize FOOTLOOSE? I could go on but then I would enter the realm of spoilers. The most blatant one is when Character A reveals she is going to betray Character T. In the next scene, Character T is told, ‘she is going on to betray you!’ Like, how is that information conveyed across the galaxy so fast? Talk about a super app: i-renounce. It must be available on A T & T.

Based on a 2000-ish comic book by Oxford graduate Dan Abnett and Andy Lanning (aka DnA), GUARDIANS OF THE GALAXY is the first Marvel Studios film not based on characters that have entered the collective cultural consciousness like Spider Man, Thor or Captain America. This is not to say that the character types aren’t original and the film has more than a whiff of BATTLE BEYOND THE STARS, a Roger Corman-produced space knock-off of THE MAGNIFICENT SEVEN by way of STAR WARS, released in 1979.

It begins with a trope from CLOSE ENCOUNTERS OF THE THIRD KIND as in 1988 young Peter Quill is picked up by a mysterious space ship. Why him? Apparently, he doesn’t even ask, though there is a reason – honest. Peter had just watched his mother by taken by cancer. Where the heck is his dad – he doesn’t know. 26 years later he’s grown up as galaxy-hopping Star Lord (Chris Pratt), a smirking, critter-kicking ravager. What do ravagers do? Stuff not very PC in the real world, but in this movie they scavenge to order. They are like bounty hunters for inanimate objects, in this case a metal orb worth 40,000 units.

For some reason, Star Lord is motivated to betray his boss, Yondu (Michael Rooker), a blue-skinned dude who apparently snapped up Quill back in ’88 and stopped his crew from eating him. (We are told this twice, so we don’t forget, but the line falls flat both times.) We are not entirely sure why Quill/Star Lord believes he can make his way in the universe without Yondu, who has taught him how to fly in his suit, but my friends, you have to just go with it. Personally, I would have given Quill some personal motivation, but like many fantasy movies, this relies on forward momentum and the threat from bad guys to pull you along.

Quill isn’t the only dude after that orb. There are hired thugs sent by Ronan the Accuser (Lee Pace), a blue-skinned villain who resembles Emperor Palpatine from STAR WARS left out in the cold. I’m sure Ronan didn’t start off being called the Accuser. Pupils at his school must have been streamed according to their use of explanation points. His mother must have been put-upon. (‘You didn’t buy me an ice cream! Why?’) He would have had a hard time making friends. Every day is judgement day.

At any rate, Quill attempts to double cross his boss unaware of the price on his head. Enter two bounty-hunters, the racoon-like Rocket (voiced by Bradley Cooper) and tree-like Groot (voiced by Vin Diesel), the former inspired by Howard the Duck and the latter by the Ents from LORD OF THE RINGS: THE TWO TOWERS, albeit with only one line. There is a running joke that Rocket doesn’t know what animal he is. Now I assume he has access to a computer and can find out from the cosmic internet, so I find that a little hard to believe. Also on Quill’s tail is one of Ronan’s lieutenants, green-skinned Gamora (Zoe Saldana).

Quill, Rocket, Groot and Gamora are thrown together by a common cause and joined by a fifth, Drax the Destroyer (Dave Bautista), whose name suggests that he clearly couldn’t be trusted with the toys in his kindergarten. Bautista is made up to look like a Maori warrior whose war paint suggests that it was applied by a little kid using a squeezy bottle. (‘I thought it was ketchup.’) Drax is the most inspired character; he is like a Native American who understands battle but not cultural references. He takes everything literally.

Having established the characters, Gunn and his co-screenwriter Nicole Perlman set them on a path to take the orb to a safer place – cue an encounter with the Collector (Benicio Del Toro), a character introduced in the closing minutes of THOR: THE DARK WORLD who turns out to be a bit of a disappointment.

Glenn Close signed up for the movie as Nova Prime for the chance of a great hairdo, disappointed that she hasn’t starred in any adaptations of young adult novels (Meryl Streep is in THE GIVER and Julianne Moore got the HUNGER GAMES: MOCKINGJAY gig). John C. Reilly also has a small but significant role. Betrayal and the threatened destruction of a planet follow in a film that veers towards killing of its principal characters in a more convincing manner than other superhero films.

GUARDIANS OF THE GALAXY is a fizzy drink served in a formula milk bottle and offers the audience some light entertainment. There are some moments when you cannot treat it as escapist stuff, when we are told Ronan’s boss, the mysterious Thanos (who may or may not be played by Josh Brolin) is responsible for ‘killing women and children’. Suddenly we start to associate Thanos and his associates with a government of a democratic nation who ordered the same thing in the name of self-preservation. Somehow it isn’t a straight forward perception of ‘this is evil’. If the film had been released in the middle of June, I and perhaps other audience members wouldn’t be making this association.

Karen Gillan co-stars as another daughter of Thanos (like Nebula, actually) who battles her half-sister in the climax. Scottish actress Gillan does a creditable job in the action sequences and is among a notable contingent of British talent in minor roles (including Laura Haddock and Peter Serafinowicz).

On balance, I enjoyed GUARDIANS OF THE GALAXY for its humour and slick effects, though I didn’t stay for the final, final scene (post credits) which I am assured is funny. Cue for a repeat trip or nipping in at the end of a screening to catch them.