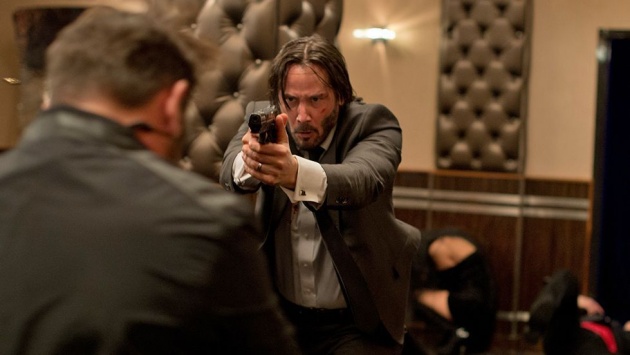 How much plot does a film need? In the case of John Wick, a hyper-violent revenge drama starring Keanu Reeves in the title role, the answer is, very little. Within 10 minutes of the film’s opening, the titular former hitman takes possession of a puppy – a gift from his late wife - and hears it get brutally killed (he is face down on the floor at the time). If John had just sold his 69 Mustang to Iosef Tarasov (Alfie Allen) the son of his former employer, Viggo (Michael Nyqvist) – why didn‘t he recognise him – after the two men met at a garage, the ensuring carnage would have never have happened. Iosef’s mistake is not killing John – why didn’t he know of him? Now John wants to make Iosef pay!

Chad Stahelski is credited as director – David Leitch apparently also helped out. But the film is really made by the action choreography. Turn here, shoot guy in head, duck round corner, then shoot other guy. At one point, Iosef tells one of his gangster friends to stop playing his very loud video game. I had that thought one hour ago.

The pleasure of the film – and there is some – is in the rarefied world of organised crime that Stahelski and screenwriter Derek Kolstad create. John has a friend (or maybe not) in Marcus (Willem Dafoe) who accepts a two million dollar contract to kill him from Viggo, after the ‘don’t you know whose car you stole?’ scene. Lance Reddick turns up as the hotel manager of the Continental, a midtown hangout for well-heeled low-life, where the house rule is ‘no fighting’. Practically all the guests are vigilantes or hired guns. I was expecting Paul Kersey to show up. One would-be assassin is Ms Perkins (Adrianne Palicki) who proves the adage that, no matter how much they hurt you, if you are ‘Hollywood action man’ you don’t kill women or children. Clarke Peters turns up as a hotel resident who babysits Ms Perkins on a ‘catch and release’ basis when she violates the house rules.

In this parallel universe, it is possible to free yourself from handcuffs, survive a savage stomach wound and maintain your mobility. All the villains wear red shirts – that is how easy it is to spot them. John Wick also features a ridiculous scene of John being captured by Viggo, when a shot through the head would have sufficed. ‘You destroyed my secret stash,’ he complains. ‘Yeah,’ says John in his only attempt at humour, ‘I kind of enjoyed that.’

The score is rock music heavy – if Marilyn Manson counts as rock. For reasons unclear to me, John is allowed to enter an airfield to drive his 69 Mustang recklessly. He has grief to burn and what better way to do it by degrading his tyres. John Leguizamo turns up in two scenes (but one location) as the vehicle recycle guy who refuses to give John’s stolen Mustang new plates. Ian McShane plays Winston, the proprietor of the Continental who is, actually, from the continent.

Will John get relief from exacting his vengeance? That’s not the point. It’s not good calling the violence gratuitous – it is the only reason to see the film. I got kind of bored. John Wick is the kind of movie where the entire congregation of a Russian Orthodox Church is packing, where a Russian club is called Red Circle and where it takes the villain a drive across town to reach his helipad – why does his helicopter not land on top of his crime syndicate skyscraper. John Wick certainly deserves stick. I feel disappointed for Keanu Reeves who once made hi-concept action films like the Matrix trilogy. When he got this script, I wish he said ‘hell whoa!’