Film Review: POWDER ROOM: cisterns are doing it for themselves 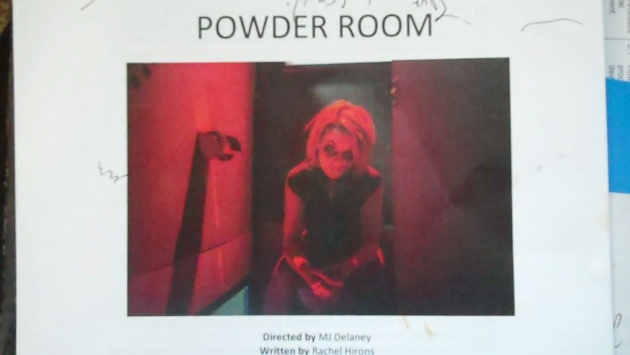 POWDER ROOM is not, as I first thought, the sequel to BOILER ROOM, in which cocaine-addicted Wall Street traders snort their way through a difficult day of business. It is an adaptation, by the author, of Rachel Hirons’ play, WHEN WOMEN WEE, in which the action is set entirely inside a ladies’ lavatory during a night out. (Incidentally, if the men’s loo in America is called the John, why is the ladies’ room not called a Joanna?) As an alleged comedy that sees bottom action, it is more ‘what a swizz’ than ‘gee whizz’; it’s not all it cracked up to be. Powder Room is, of course, the polite name for the women’s only sacred place where they re-apply lippy and exchange something called ‘goss’, which I thought was one of the twins from the band Bros  until I realised that it just showed my age. Very occasionally, women go into a cubicle for a good cry (why is shedding tears ‘good’?) Alternatively, they shell out what is commonly known as a number two. I think that another way to describe it is: ‘I’m re-arranging my handbag.’

Given the infinite capacity for toilet humour – whilst Icelandic people have 32 words for snow, we Brits have more than 100 for crap; that’s just our turnover of bad movies per annum – it is surprising just how unfunny POWDER ROOM is. The director is MJ Delaney and my suspicion of artists who don’t tell us their first name – like PJ Harvey and JK Rowling before them, not to mention that J R R Tolkein – is well-founded; they have something to hide. I can imagine that Delaney is going to be one of those one-movie whatever directors who proves that they can’t handle inaction.

Of course, if POWDER ROOM was as raucously funny and entertaining as the posters (in the UK) proclaim, it would be released in more cinemas and not up against THE HUNGER GAMES – CATCHING FIRE. This film set in a toilet has been dumped.

Whilst appreciating that a film set in a ladies loo is a sitting target – you can see what I meant about infinite capacity for humour – there is something intrinsically watchable about a single location movie. You want to know if the director can find interesting ways to place the camera and use it as a revealing device and whether tension can be created. Handling the passage of time is also a challenge. As a stylistic exercise, POWDER ROOM does of course cheat – what do you expect from a British film? I didn’t mind that we see the characters enter a night club to establish location. But then we also see characters go out for a cigarette. The only stylistic device that the play had but not the film is that it boasted an all female cast. Not true of the movie, as we see the film’s protagonist, Sam (Sheridan Smith) talk to a bloke in the bar. At these points, you say to yourself, why bother? Why not make a girls’ night out film instead of insisting of the unique selling point of a single location? This is commonly known as a failure of nerve.

The British screenwriter Abi Morgan recently described film as a director’s medium. In British cinema, for the most part this is incorrect; the producer holds sway, in this case Damian Jones whose impressive list of credits, now soiled with this, includes ADULTHOOD, MILLIONS, WELCOME TO SARAJEVO, THE HISTORY BOYS, THE IRON LADY. Jones would have decided how to develop the screenplay and who to cast and would have contributed with eyes on marketability on the dilution of the original concept. If I were the author of WHEN WOMEN WEE, I would be pissed off too. In television, a script editor holds this function, but producers tend to get excited by a property, acquire it and dial back in caution.

It’s hard to describe what happens in POWDER ROOM without it sounding banal. Sam decides to hang out with some old school friends (among them Jess played Oona Chaplin) pretending to be more successful than she is. In reality she is in a bad job and heartbroken. Her bestie Chanel (Jaime Winstone) also attends the club, on the pull. She gives Sam a reality check. You can’t lie about who you are, but you’re better than that. The comedy comes from Sam attempting to keep up the pretence and evading any situation that would give her away. Meanwhile two girls out for fun steal other women’s drinks – makes a change from their boyfriends - including those belonging to Sam’s group.

The selling point of the play is that we see the women in unguarded moments using no holds barred language, knickers round ankles at their most exposed - though not sexually. Yet there weren’t many laughs of recognition from the audience. The set up was too contrived and exposed a dependency on plot. The action is observed by a silent Caribbean toilet attendant (Johnnie Fiori) – signifier, a towering head scarf that masks braided hair - who acts as den mother whilst prompting for tips, a device that doesn’t add anything and undermines the idea of seeing women in unguarded moments.

It ends in ‘uplifting’ fashion but I for one was just glad it was over. It was as pleasurable as waiting to use a cubicle – paying for it too; what an insult. There are a few laughs but these peter out. I imagine this film will be flushed from its stars’ CVs as it will from multiplexes.

Reviewed at Charlotte Street Hotel, which has very nice conveniences, thank you