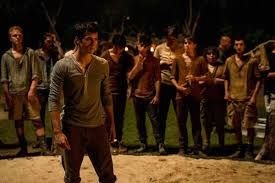 When he ends up in the middle of a glade with a group of teenage boys, Thomas (Dylan O’Brien) the protagonist of the young adult drama, THE MAZE RUNNER, does what anybody in his position would do – he tries to get the hell out of there. The glade is a cross between a forced labour camp without armed guards and a commune. The ‘gladers’ (occupants of the glade) are all assigned roles. Some are labourers, doing basic maintenance. Others are gatherers, fetching wood. Then there are the runners, who run through a giant high walled maze, trying to get to the outside. But no one really gets out. There are ‘grievers’ to stop them. No-one can say what they look like.

The set up is intriguing. THE MAZE RUNNER is adapted from James Dashner’s 2009 novel by a trio of screenwriters, Noah Oppenheim, Grant Pierce Myers and TS (Thomas Scott) Nowlin and directed by Wes Ball, known for the animation short, A WORK IN PROGRESS. With all the characters having lost sizeable chunks of their memory, but just getting on with it, THE MAZE RUNNER is a uniquely American concept. Characters adapt to the outdoors and forget the past to forge ahead in a new self-defined future.

After spending a brief spell in solitary confinement, Thomas gets shown around by Alby (Aml Ameen), the boy who had lived in the glade the longest (‘somebody had to be first’). Occupants in the glade are all transported through a hole in the ground that suggests to me that they shouldn’t enter the maze but dig under it. Apparently, every conceivable form of escape had been tried before. The boys don’t think to ask why they are sent supplies or new recruits. What’s the point? Thomas – doubting Thomas? – is uniquely curious and can’t wait to run into the maze himself when he goes into to help a wounded Alby.

Thomas’ nemesis is Gally (Will Poulter from SON OF RAMBOW and WE’RE THE MILLERS). He is a ‘don’t mess with the order of things’ kind of kid who likes people to stick to their roles and that’s it. Thomas gives Gally a real shove for his ha’penny in the circle in their tribal ‘alpha male’ name recall ceremony – after a push to the dirt, Thomas remembers who he is – and continues to upset him, notably after his maze experience.

Halfway through the film, a single girl, Teresa (Kaya Scodelario from WUTHERING HEIGHTS and EMANUEL AND THE TRUTH ABOUT FISHES) appears and you think this is going to result in some serious problems. These are limited to her throwing stuff at the boys and somehow recognising Thomas – no ‘shove in the circle’ ceremony for her. Teresa is there to remind us of Kristen Stewart in the TWILIGHT movies but, more than that, to widen the demographic for the film.

Who are the grievers and what’s in the maze? That would be telling. It does involve Patricia Clarkson as the only adult female in flashback sequences and characters in white coats. The film keeps you interested through a terrific build up but then the ending isn’t at all satisfying.

As concepts go, this is THE BOURNE IDENTITY meets LORD OF THE FLIES by way of a prison break movie. (The TV series LOST is also a good reference point.) With characters having forgotten their past, there is limited back story. Instead the film is action driven. One of the gladers attacks Thomas – that’s never happened before – then a whole bunch of stuff occurs that also ‘hasn’t happened before’.

In as much as there is a central conflict, it is ‘accepting things they way they are’ verses ‘let’s just keep trying stuff’. Gally is a survivalist placating an unseen God whilst Thomas doesn’t accept that life should be passive.

There is a high British quotient in the cast – a nod to the castaway schoolboys in LORD OF THE FLIES. One boy even looks like ‘Piggy’, minus the glasses. Poulter, Ameen and Scoledario are joined by Thomas Brodie Sangster who plays Newt, short, I think, for neutral. There is an Asian character, Minho (Ki Hong Lee), one of the runners who built a replica of the maze with evenly cut twigs.

The disappointment of the climax does not entirely diminish the pleasures of the rest of the film. THE MAZE RUNNER grips rather than bores and Dylan O’Brien acquits himself in the lead. There isn’t much humour but the film is so well paced that you don’t notice. It is natural to be cynical about films that attempt to be the next HUNGER GAMES but for most of THE MAZE RUNNER’s 113 minute running time, I cast this aside.

Reviewed at the Mayfair Hotel, London, Sunday 28 September 2014, 20:00 show. With thanks to Film Distributors Association

Every maze has an End So hey guys! Its been2 months since I submitted a new blog, but now I am so e…