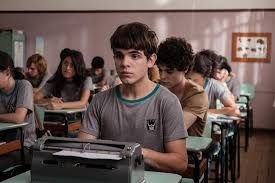 When we first meet Leonardo (Ghilherme Lobo), the teenage protagonist of Daniel Ribeiro’s feature, THE WAY HE LOOKS (Hoje eu quero voltar sozinho), we don’t immediately notice that he is blind. He could be any teenager lolling around a pool in an affluent Sao Paolo suburb talking to his best friend, Giovana (Tess Amorim), about boredom and one’s first kiss. We do wonder briefly why Giovana has to open the gate to his family home – she asks for his key. His parents are more concerned that he leans back on his chair at the dining room table. ‘I have never fallen yet; it’s my super power’, counters Leonardo. His father pulls him back.

Leonardo’s blindness is most apparent in a classroom scene in which he types into his Braille machine. He attends an integrated class which is a model for classrooms not just in Brazil but across the world. The clattering of his typing incites ridicule from other students – the seat behind him is empty because (allegedly) he is judged too loud. As a taunting student is sent out of class, a new boy, Gabriel (Fabio Audi) arrives. He takes the seat behind Leonardo without a moment’s thought.

Leonardo and Gabriel make friends when he asks him for an eraser – naturally Leonardo has no use for one but he reaches over to Giovana’s desk to offer him hers. She can barely conceal her delight. The new boy is handsome, non-judgmental – potential boyfriend material.

Leonardo really wants to be a normal kid. He wants to be trusted to be in the house on his own. Still, when his parents aren’t home, he is happy to go to his grandmother’s. She introduced him to classical music – ‘if you like this, you can like anything’. For Leonardo, classical music is it.

The route to grandma’s house is marred by teenage bullies. In one arresting scene, three boys stand around Leonardo, clicking their fingers; Leonardo is framed so we just see his head and their fingers around him, like lethal castanets.  Leonardo falls over and gains a bruise.

For understandable reasons, Leonardo wants a change of scene, to be perceived differently. When he hears of a foreign exchange programme, he is interested. He concludes that his parents won’t entertain the idea. They micro-manage his every social encounter; yes, he has friends over, but mom checks up on him.

Leonardo and Gabriel are paired on a class project. Girls are supposed to write about Athens, boys Sparta. If you want to emphasise a gender divide, that would do it. Gabriel doesn’t want to do the assignment straightaway; he wants to go to the movies. So he takes Leonardo to the cinema and narrates the movie to him. (‘A giant robot has picked up the bride and groom.’ Boom! ‘The giant robot has killed the groom.’ Laugh. ‘The bride has tossed her bouquet at the robot’s head.’)

Giovana is upset that Leonardo and Gabriel went to the movies without her. There is more. Gabriel introduces Leonardo to Belle and Sebastian and encourages him to sneak out and watch a lunar eclipse with him.

Ribeiro’s script was work-shopped and details precisely worked out. So a lunar eclipse becomes a metaphor for the way three friends can negotiate their relationship. Just because one is blocked out by the other so the moon is invisible, it does not mean that the sun, moon and earth are not there for each other.

It becomes apparent after the lunar eclipse episode that Leonardo has fallen for Gabriel. In bed, he puts on Gabriel’s hoodie (which he left behind) and nuzzles into it. Does Gabriel feel the same way? Leonardo finds out the way we all do, through awkward social encounters, involving in his case, a camping trip, a shower, a swimming pool, a party and a dog named Cupcakes.

THE WAY HE LOOKS is an entirely relatable movie for any teenager. Its ‘gay theme’ is beside the point. At the cinema where I saw it, no trailers were shown, as if the audience were so niche, they wouldn’t be interested in INTERSTELLAR or THIS IS WHERE I LEAVE YOU. This is of course utter rubbish. Ribeiro’s use of the frame is particularly telling. I particularly liked the final shot of two characters on a bike (I won’t explain what’s unusual about it). When the story takes the course you want it to, you cheer (inwardly). In the US remake, I would cast Nicholas Hoult as Leonardo and Aneurin Barnard as Gabriel. But why wait for that?