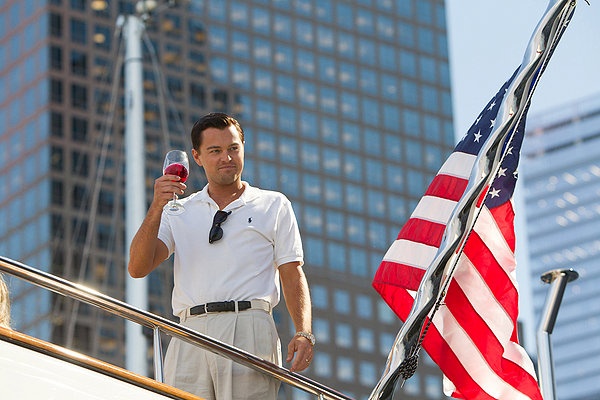 Martin Scorsese pictures are studies of male behaviour. They plug you in to the sensibility of the protagonist. You’re not supposed to like his anti-heroes, but you understand them - their drives and borderline psychosis. (Jake La Motta, Bill the Butcher - what am I talking about, borderline! And as for Max Cady in CAPE FEAR and Jesus himself from THE LAST TEMPTATION OF CHRIST...) What you admire in his characters is their work – Lionel Dobie’s action painting in LIFE LESSONS (1989), Fast Eddie and Vincent’s pool playing in THE COLOR OF MONEY (1986), Jimmy Doyle’s saxophone tootling in NEW YORK, NEW YORK (1977). Recently, though, I would say since GOODFELLAS (1990), Scorsese’s films have lacked that compelling charge. It wasn’t simply that he cast Leonardo DiCaprio in the lead, the complete opposite of the chameleon-like Robert de Niro of the 1970s. I got the feeling that he had lost his voice. Suddenly his films like THE AVIATOR (2004) and SHUTTER ISLAND (2010) started putting me to sleep – literally, I dubbed the latter SHUT-EYE ISLAND or just SHUT-EYE LAND. DiCaprio isn’t a bad actor, but he isn’t dangerous or compelling; I always felt he was there to get Scorsese the money. With De Niro, Scorsese’s star of choice in his early movies, it was a case of ‘how deep into the role can I go’. With DiCaprio, you sensed an actor in awe of his director who did not mind not being a superstar, so long as he could keep his hair and face – he’s like one of the characters in ANCHORMAN.

The good news is the Scorsese of old is back. Watching THE WOLF OF WALL STREET, I felt that he had finally found the role for DiCaprio, someone whose danger did not reside in violence, rather in irresponsible, boyish behaviour – and, by Odin’s toothpick, DiCaprio has the face for that. The screenplay by Terence Winter is a solid launch pad for the improvising cast; there is an exchange about not getting a reputation for mistreating dwarves because they gossip, and DiCaprio (as stockbroker Jordan Belfort) nuzzles co-star Jonah Hill (as Stratton Oakmont’s Vice President, Donnie Azoff) and says, ‘that’s why I love you – you think of stuff like that’. This is a blatant case of one actor congratulating another on screen and it seamlessly fitting into the fabric of the movie.

Like WALL STREET before it, THE WOLF OF WALL STREET is an anti-capitalist tract that is in love with its subject. It’s a feel-good film for stock brokers, who in this film, get better lighting than the FBI agents trying to bust them. It’s a study of learned behaviour, adopted because it seems exciting and without rebuke. One criticism that could be levelled is that we don’t understand where these stock brokers with a penchant for depravity come from. These guys don’t have a sense of entitlement that comes from being born rich; these are chancers who discover the joy of risking – and stealing – other people’s money and become addicted to it.

In the movie, Belfort is corrupted by a senior broker, Mark Hanna (Matthew McConaughey in a vivid ten minute cameo) who teaches him the joys of martinis every seven minutes, drugs and chest beating. He makes an alpha male look like Alfa Romeo, which I guess is what Alpha Male is in Italian.

Jordan doesn’t have to earn his clients’ money - he simply has to take it. After the Wall Street crash (19 October 1987), Jordan does just that. He walks into the premises of a Long Island penny stock brokerage and shows a gang of misfits how to get poor folk to risk big so he can get 50% commission – a percentage unheard of in Lower Manhattan’s financial houses.

It is clear that Jordan has no scruples – a man dumb enough to believe him, this cold-calling stranger with the promise of easy money, is a deserving sucker whose chance of paying off his mortgage early evaporates up Jordan’s nose. Jordan not only takes money but learns how to spend it – nice house, great car, drugs, women, expensive watch. He also takes his penny stocks and pink lists to challenge Wall Street, forming Stratton Oakmont (logo: a lion in front of a globe) and multiplying brokers.

Another criticism of the film is that we never find out what happened to the companies whose junk stock was traded; there is a poignant shot of a shed to represent one of the businesses being talked up. That’s like saying RAGING BULL ought to digress to show what happened to boxers humiliated by Jake La Motta in the ring. In Jordan’s world, as in Jake’s, it’s what or rather who next.

So – about that dwarf tossing! The film opens with the most outrageous male behaviour. Back when he was a doodling school-kid, Scorsese fantasised about making a Roman epic (see Mary Pat Kelly’s biography, ‘Martin Scorsese: The First Decade’). Well, here he’s finally done it. What we see would not look out of place in Tinto Brass’ CALIGULA or, if you prefer, the end of PERFUME: STORY OF A MURDERER (and I’m not recommending either). Only Scorsese overdoes the bacchanalia.

When he sees something better, Jordan trades in. He leaves his wife for Naomi Lapaglia (Margot Robbie, the next Nicole Kidman) a woman so beautiful she causes Donnie to work his trousers. (It’s that kind of film.) There’s even a London interlude where Jordan flirts with Naomi’s Aunt Emma (Joanna Lumley) whom he requires to transport cash to Switzerland and an amusing use of corresponding spoken thoughts. (‘Is she flirting with me?’ ‘Bloody hell, he’s flirting with me!’)

Scorsese does like to teach us something – in THE AGE OF INNOCENCE (1993) it was about place-settings. Here, he – or rather Jordan - explains the legal definition of bribery, a specific amount offered for a specified service. Federal agent Patrick Denham (Kyle Chandler) doesn’t take the cash but he does eventually take Jordan down.

Menace is provided by the bearded Brad (Jon Bernthal), who asks a waitress four times for a replacement bottle of ketchup in an early scene and whose wife’s family is also involved in moving Stratton Oakmont’s cash. His fractious relationship with Donnie proves to be Jordan’s downfall. There’s a boating interlude when Jordan attempts to save $20 million of money banked by Aunt Emma but it does not feel like the end of the world when it doesn’t work out.

This is one of Scorsese’s lighter works but it’s also articulate. He does under-estimate his audience, though. Jordan starts describing an Initial Public Offer (IPO) but then adds to camera, ‘you don’t really want to know.’ Yes, this viewer did.

Is it misogynistic? Well, there are no good parts for women in it, apart from Lumley’s Aunt Emma, but then his film is about a boy stuck in a boy’s world. It has irresponsible behaviour but also shows clouded reality, notably in an extended set pieces involving Qaaludes dating back to 1981 (as Jordan explains, ‘they don’t make ‘em any more’). He thinks he can drive a car under the influence without causing an accident; there is a great punch line (obvious now I’ve set it up).

Viewers might complain that there are no African-American brokers working for Stratton Oakmont – what’s with that? There is an Asian American, Chester Ming (Kenneth Choi) but he’s more of a presence than a character.

THE WOLF OF WALL STREET has some terrific set piece speeches, notably when Jordan is about to leave behind Stratton Oakmont (renouncing his drug, as it were) and then changes his mind. We see that he also took on people because he wanted them to share his sense of self-belief; he tells us he wrote a cheque for $25,000 for a female recruit who just needed five thousand. It ends with the test of a good salesman - ‘sell me this pen’ – a line that is likely to pass into movie quotation history.