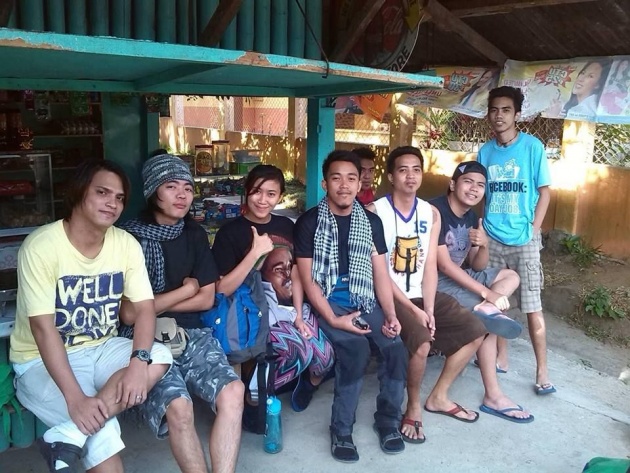 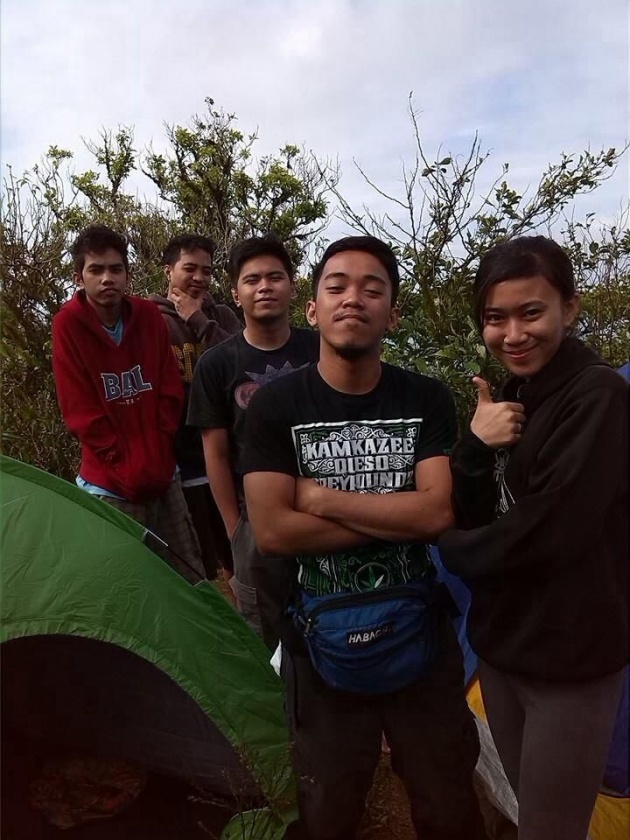 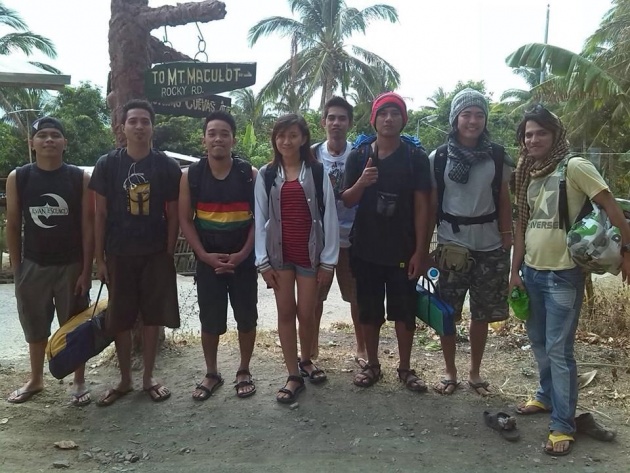 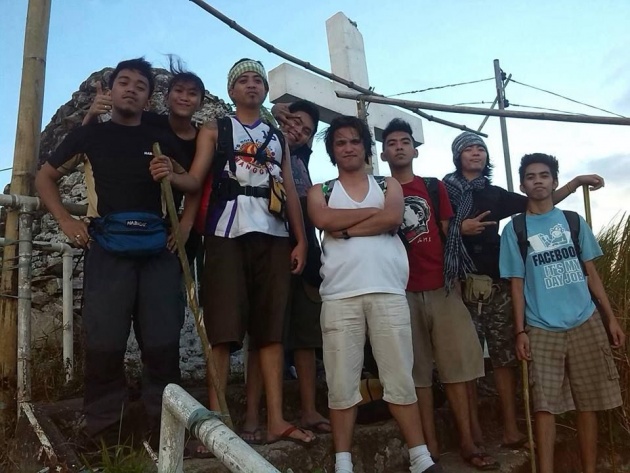 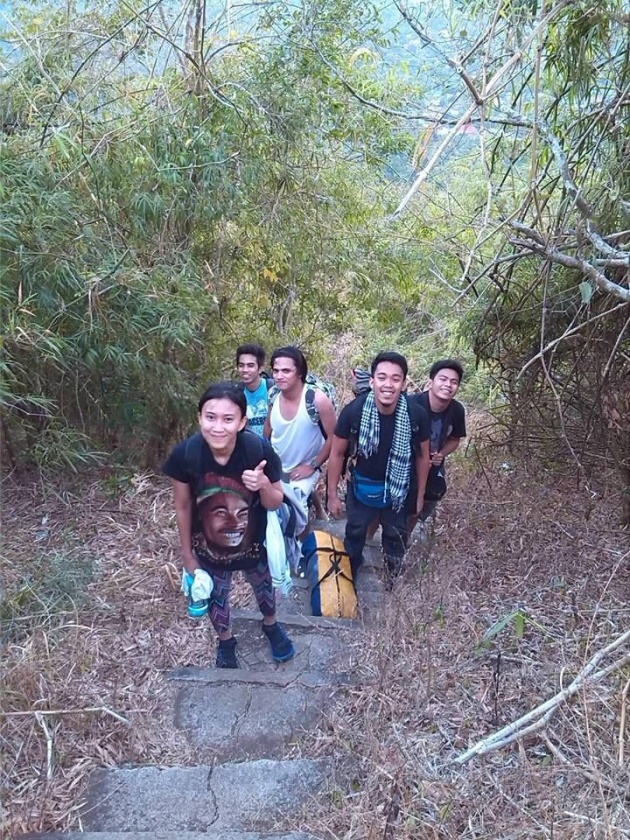 When things get so plain in life, I tend to thirst for ways which may add some spices over the boring routines of my days. I didn't realize it at first when the awesome Mr. Perfect Timing already jumped on the arid and non-special situation I was in. My brother started his climbing hobby and influenced most of our friends to come with him including my boyfriend, who, of course, generously and fantastically invited me.

That's how I met thy great Mt. Maculot.

Few days before our scheduled hike on March 23rd of this year, mixed emotions had been playing inside me - excitement for the first real and unfamiliar adventure of my life, fear for the possible worst case scenarios that may happen, and optimism to temporarily escape the city. There we're nine of us in the group and unfortunately, neither had professional background nor training for this kind of craft. But the show must go on. We just depended our safety to God and to my bro who'd been there a couple of weeks ago. No itinerary, no smart plan. Just some fighting spirit.

We started our journey in Ortigas, EDSA by boarding a bus heading to Lemery. Honestly, I already forgot what's the name of the place where we got off in Batangas but as far as I remembered, we rode a jeep that took us thirty to forty five minutes ride to Cuenca. It's a civilized town that looks like the ones that we have in Manila, only it's cleaner, quieter and air is fresher. From there, we started walking and drop by to a Lomihan near the jump-off to fill ourselves before starting the trek.

People on the road kept asking us if we already registered at the barangay hall, I was not sure then how important it was to do that. I ignored them and let my buddies lie to them by answering yes.

So, we kept on trekking towards the jump off, I heard from my brother that we'll take the traverse route and had no idea what it meant. I went with the flow considering I was a newbie who has no rights to speak.

Upon reaching the jump off at four in the afternoon, I was surprised to see a series of concrete stairs. I expected the trail to look like earth, with grasses and soil. I guess this will be easier, I arrogantly told myself. But after some minutes of battling with gravity while carrying the heavy pack on my back, I felt like I wanted to make my burden lighter by quitting and rolling back to Manila, to my bed to be specific. Again, the show must go on. No pain, no gain. I would hate to make myself a loser by giving up on an adventure. So I and my group continued and reached the Grotto as what they called it after I didn't know long. The wind was really mad at this place and it somehow brought me a big amount of refreshment.

The loud and long chit chats were replaced by heavy breaths as if we'll competing for oxygen. No one wanted to talk for it has become a complete waste of energy. Anyway, being drained of strength and energy was only the second of my concerns. My main was, it was starting to get dimmer, twilight is approaching and most of us didn't bring flash lights. Stupid, I know.

Water, tents, rice, pork adobo for dinner, portable gas stove, butane, clothes, first aid kits - we thought that as long as we brought those stuff, we'll survived safe and sound already. Neopyhte kind of thinking as what I said.

So we doubled our pacing, like we're racing with the sunset. Then we reached a very rocky slope, I was almost blind and scared. Only one of us had head lights, two had flash lights and there were nine of us. I felt so safe, seriously. I got even more scarier when we reached the rope segment of the mountain. It was my first time and didn't have any idea how to make it up there with my bones still intact especially in the dark. On the other hand, I was sure I didn't want to be left down there, no way! So I just did what I had to.

After everyone successfully defeated the rope obstacle, we continued to ascend a very rocky trail. I really had a hard time pushing myself forward, I even had to cling on trees for support. I was afraid that one mistake would make seven of us rolling down the mountain since I was the second in the line. Unfortunately, there was another rope segment in the part of the mountain. But it was easier that the first one.

More unfortunately, after getting further into the dark forest, my brother confessed later on the he was not really familiar with the trail. He confessed it to us after we realized that we're getting lost already. Still, I did not panic for it would not magically lighten the path nor help us in any way. I just followed my friend ahead of me as he searched for the possible trail to the campsite. We stopped from time to time, to debate which way to take, left or right, up or down? And again, it was really dark.

It was already ten in the evening, still, there's no sign that we're already somewhere near the campsite. So we decided to pitch our tent in a small open ground that we found. We were all bloody tired and hungry at the same time. The moon and stars gave us a little brightness but it was not enough. Strong wind was hitting our tent so badly. We could even hear how it madly gathered it's strength from afar like how a wave pulled back to the sea before running forward again and hit the shore. I was afraid the wind would break our tents and blew us away.

I didn't know why unfortunate events kept on happening, our rice was half-cooked. We tried everything to make it edible until our stomach gave up because of hunger. We turned the stove off and just served it for everybody. They complained of course, but there's nothing we could do about it so they ate it anyway. For another record of stupidity, most of us didn't have anything to eat on or any spoon and fork to use. So we ate on the covers of pots, tupperwares and even plastics using our hands.

We woke up the next day only to realize that we camped at the summit. How did we know? Mountaineers kept on dropping by, giving us that strange look, asking us through their eyes why in the hell did we camped there. We told them the real story, as foolish as it may sound, that we got lost. More groups of mountaineers kept coming so we packed up and continued to find the famous Rockies. The trek towards the famous spot was easier than the one we'd trodden last night. Though, I was walking slowly, afraid of falling.

To cut the long story short, six of us reached the Rockies, three, including me, my boyfriend and his cousin waited for them at it's lower part. We we're bloody hungry, no food, no chips and no enough water left to fuel our body when we took a rest at the campsite after their photo ops. We still resumed our descend for we didn't have any choice and kept those concerns to ourselves until we arrived on the exit point and bathed our stinky selves.

And to sum it up, there's a glorious view of Taal lake on the path before the Rockies, summit is full of tall grasses, there's a fork on the summit going down to a dead end and the other one towards the Rockies, I slid down eight times, had my knees shook harder and heart pound louder than necessary because of the fear of heights, 8 oz of mountain dew costs 45 php, multiple buko and halo-halo vendors are stationed up there, and as we descend, the price they offer for their refreshments also depreciates, at least according to my observation.

Then Team ULAP (Under Life's Adventure to the Peak) was founded and we wanted to make mountaineering part of our life.

I will never forget that adventure for it taught me a lot of lessons. You already know what they are!

A Year Spent With Bitlanders