Hello Bitlanders! Time for another movie review! This was a very popular Marvel movie and even I liked it, despite being very picky about comic book to movie ideas..there has definitely been some serious over saturation with super hero comic book movies so as much as I was interested in this movie, I didn't expect a lot. I was pleasantly surprised!

Let's get into it!

Half human half alien abducted as a child raised by aliens. Leader of the Guardians.

Orphan of an alien world. Trained to be Thanos' personal asassin.

Warrior seeking revenge for the death of his family by Ronan.

Leader of the Ravagers and a parental figure to Quill

A Kree ally of Ronan

A member of the Nova Corps

A collector who obsessively keeps relics, fauna and rare species of the galaxy. 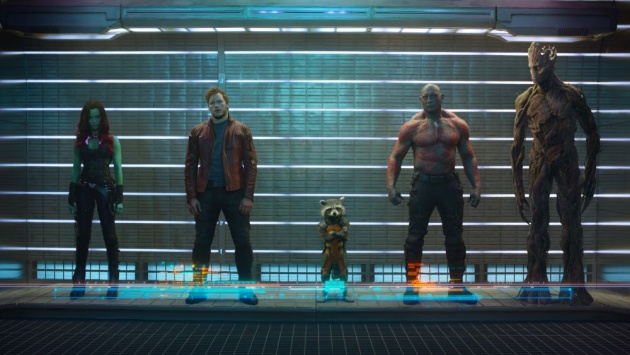 GUARDIANS OF THE GALAXY PLOT:

In 1988 a young Peter Quill is abducted by aliens following his mothers death. They are called The Ravagers and are space pirates led by Yondu Udonta.

Twenty six years into the future we see Quill as an adult stealing a orb on the planet Morag. He is attacked by Korath, a subordinate of Ronan. Although Quill escapes with the orb, Yondu is made aware of the theft and places a bounty on his head, and Ronan sends the assassin Gamora after him.

Quill attempts to sell the orb on Xander, the capital of the Nova Empire, but is ambused by Gamora who takes the orb. The fight draws more bounty hunters, a genetically and cybernetically modified racoon that goes by Rocket, and Groot, a tree-like humanoid. 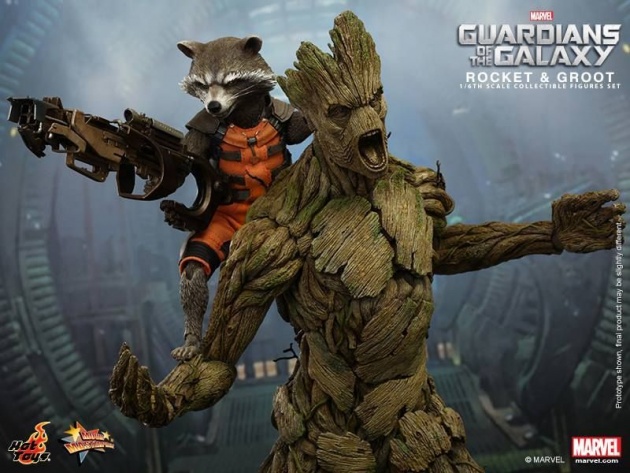 Nova Cops end up detaining all four and taking them to  the Kyln. While there, fellow inmate Drax tries to kill Gamora for her association to Ronan and Thanos, who killed his family.

Quill convinces Drax that Gamora can bring them to Ronan, despite Gamora admitting to him that she has no intention of allowing the orb to fall into Ronan's hands and plans to betray him.

Upon finding out that Gamora has a buyer for the orb, Quill Rocket Groot and Dax work together with her to escape in Quills ship the Milano. 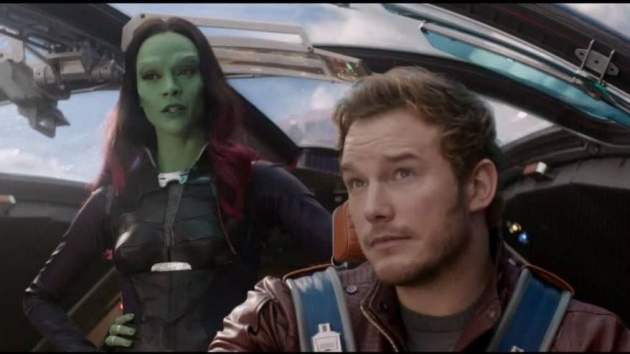 Elsewhere, Ronan meets with Gamora's adoptive father, having learned of her betrayal. Quill's group flee to Knowhere, a remote outpost in space popular with criminals and built from the head of a Celestial.

Drax drunkenly calls Ronan while the rest of the group go with Gamora to meet up with her buyer, the collector Taneleer Tivan. Tivan opens the orb and reveals an Infinity Stone. Tivan's assistant Carina grabs at the stone in a fit of torment and triggers and explosion that engulfs Tivan's archive.

Ronan arrives and easily defeats Drax while the rest of the group flees to the ship. They are pursued by Ronan's followers as well as Gamora's sister Nebula. Nebula destroys Gamora's ship, leaving her afloat in space, while Ronan's men capture the orb.

Quill contacts Yondu before following Gamora out into space, giving her his helmet to survive. Yondu arrives shortly and retrieves them. Rocket, Drax and Groot threaten to attack Yondus ship to resuce them,  but Quill barters a truce and promises the orb to Yondu. 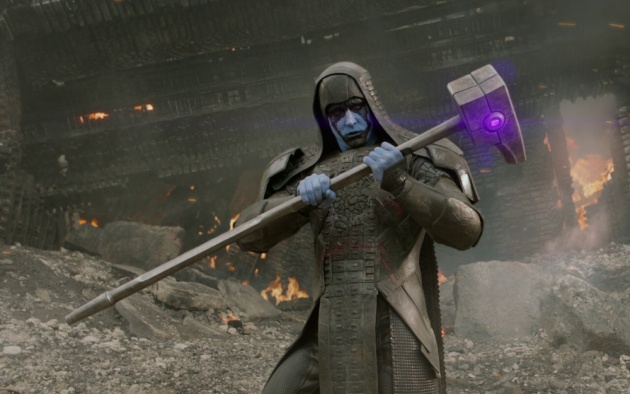 The group agrees that facing Ronan is a suicide mission, but also agree they can't just let Ronan destroy the galaxy with the Infinity Stone.

On Ronan's ship The Dark Aster, Ronan embeds the stone in his warhammer, thus taking the power for himself, He then contacts Thanos and threatens to kill him after he first destroys Xander.

Hateful of their adoptive father, Nebula sides with Ronan.

Quills group as well as The Ravagers and The Nova Corps, come together to confront The Dark Aster.

Drax and Gamora defeat Korath and Nebula, but the latter escapes, and the group find themselves out manned by Ronan. 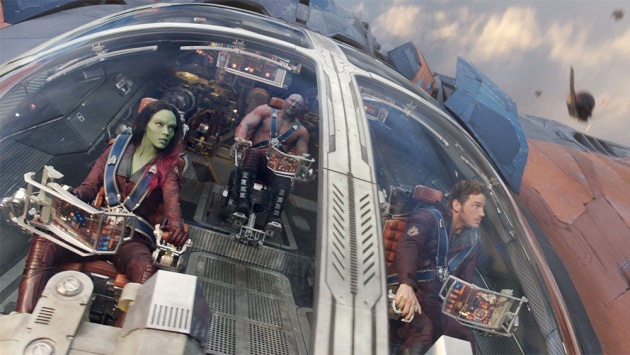 Rocket fixes this by crashing a Ravager ship through The Dark Aster. The damaged ship crash lands on Xander, and Groot sacrifices himself to shield the group. Ronan emerges from the crash intending to destroy Xander, but is distracted by Quill, allowing Drax and Rocket to destroy the war hammer.

Quill grabs the now freed Infinity Stone, and with Gamora, Rocket and Drax sharing it's powerful burden, they are able to use it's power together to destroy Ronan.

Afterwards, Quill tricks Yondu into taking a container supposedly housing the stone, and gives the real stone to The Nova Corps. As The Ravagers leave, Yondu notes that it all worked out well that they did not deliver Quill to his father per their contract. 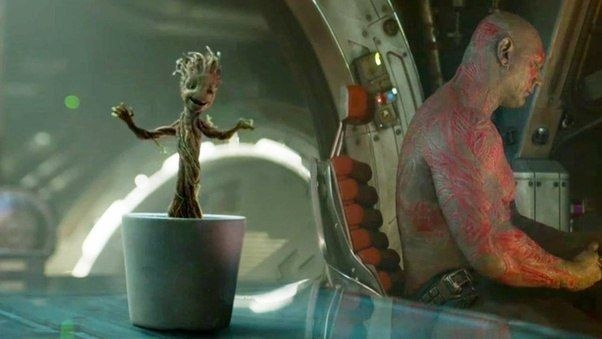 The group, now calling themselves "The Guardians of The Galaxy" have their criminal records erased, and Quill learns that he is only half-human, with a  father of unknown origin.

Quill opens the last gift from his mother- a cassette tape filled with all his favorite songs. The Guardians leave on the newly fixed Milano taking a sapling cut of Groot with them.

Like I said, I really  liked this movie! This may be in part because I never read the comic books. I might have a different opinion if I had. Some noteable things: 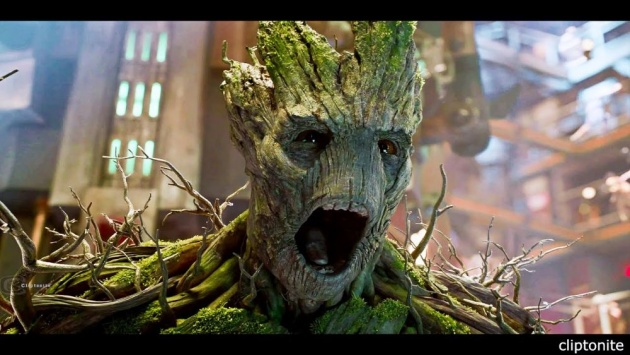 I found it very amusing that it was revealed after the movie was made that the Groot cutting the group take with them at the end is in fact Groots child, and not Groot himself as was implied. It would seem the original Groot did sacrifice himself for the Guardians! Although it is a bit strange that his death triggers the birth of his child...I don't know if that means he can only have children after death but...?

This movie did a very good job balancing the CGI laden action with well placed comedy. I found parts and characters very corny but I felt it added to the movie rather than taking away. Many comic book based movies come off overly epic and tend to lack a more human touch. I love that this movie kept it very real and funny while also having tons of action and fun effects!

The movie managed to be epic while also feeling very real and human. 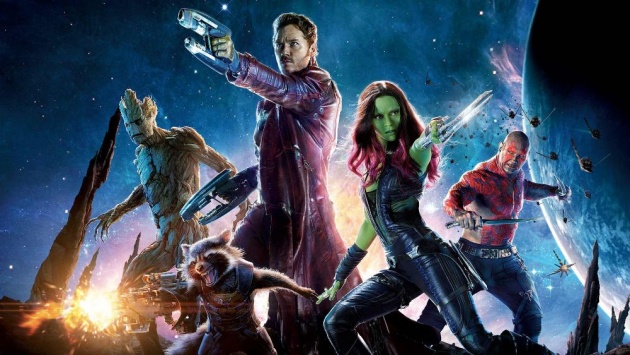 A lot of comic book super hero movies get very predictable. This movie, while still having the same basic plot of good guys save world from bad guys, managed to be spastic and erratic enough that it came off very spontaneous. All the characters were unpredictable at times and that unpredictability made for great dynamics and made the basic plot line a lot more fleshed out.

Additionally, none of the "good guys" were technically good guys at all. Quill is a thief raised by space pirates, and Rocket, Groot, Drax and Gamora are assassins/bounty hunters. They just become what is needed to save the galaxy because they understand they have to or everyone is finished.

The characters for this movie were the real spotlight. They were all well presented interesting characters each with their own backstory and way of perceiving the world around them.

I give this movie a super solid 4/5! I was really impressed by it and it was definitely worth the hype!

Guardians of the Galaxy earned $333.2 million in North America and an estimated $440.2 million in other countries, for a total of $773.7 million.

Rotten Tomatoes gave this movie a 91% and had this to say:

Guardians of the Galaxy is just as irreverent as fans of the frequently zany Marvel comic would expect-- as well as funny, thrilling, full of heart and packed with visual splendor.

Thank you for reading my blog about this pretty awesome scifi movie! I wasn't disappointed and you won't be either! Until next time