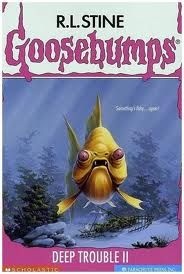 Front Tagline: Something's fishy...again!
Back Tagline: The Fish Are Biting...Everyone!

Official Book Description:
Billy Deep and his sister Sheena are spending another summer in the Caribbean on their uncle's totally cool floating lab. The weather is beautiful. And there are lots of neat places to go swimming and snorkeling.
Billy and Sheena are great swimmers. But even great swimmers get into trouble--especially this year. This year there's something really scary going on under the sea. The fish all seem to be growing. Bigger and bigger. With monster-sized appetites...

Brief Synopsis:
Deep Trouble II opens one year after the events of the previous book. Billy and Sheena are back on summer vacation with Dr. D in the Caribbean. Seeing as how this is the last sequel in the original Goosebumpsseries to be tackled by the blog, it's reassuring to know that the foundations of the sequels are still upheld: By page two, the entire plot of the first book has been negated. The adventures of the first book now boil down to:

1. How Billy discovered a mermaid and no one believed him.
2. How Dr. D valiantly was opposed to anyone keeping mermaids in cages.
3. How it was all very exciting.
Answer key: 1: F 2: F 3: F

But hey, maybe Deep Trouble II will make up for this early stumble by treating the reader to new thrills! That bit of positive thinking dies a quick death as the book opens with Billy tickling a ferocious octopus. The octopus turns out to be Sheena and the tickling turns out to be tickling. She asks if he's a "tickle-fish." Sweet mother of God, there are over a hundred pages left.

Billy decides to play a trick on his sister. He runs up to the deck of theCassandra and grabs a gray pillow. He's going to swim underwater with the pillow sticking out so his sister thinks he's a shark. This plan backfires when a real shark shows up and chases both kids onto the boat. Then the shark starts attacking the boat. Dr. D runs out and asks about the noise. Dr. D is skeptical about the attack, as there are no sharks in the area. He asks if they're sure they weren't just chased by a kid holding a gray pillow.

Dr. D leads the kids into the office on his boat to look at a new large mystery fish he has captured. Dr. D and the kids thumb through some science books until one of them makes a shocking science discovery: the giant fish is positively identified as a minnow, an animal that, like Hedwig, has a maximum length of one inch.

Billy spots some plankton samples that Dr. D has gathered and snags some to feed his goldfish. Only when Billy prepares to feed his fish, he's shocked to discover that there's a human head inside his goldfish bowl. Sheena reveals that the human head is actually a doll's head and Dr. D explains that the water in the fishbowl made the small doll head appear as large as a human head. I called the local PetsMart to see if this was true and the girl that picked up asked me if I had a real question.

Billy becomes obsessed with getting Sheena back for her 'prank,' though that's really pushing the intended usage of that word. In the water the next morning, the two go swimming and Billy cries out, "Shark!" Sheena fails to fall for this as he's not holding a gray pillow. But the joke's on Sheena, as she gets sucked into a giant jellyfish. No I'm not kidding and yes this book only gets worse.

Billy realizes he must save his sister. He attempts to just reach in and pluck her out but nothing short of diving into the jellyfish will work. Billy plunges inside the giant creature, grabs his sister, and then the two escape as the giant jellyfish scuttles away to fight another giant fish. Oh I hope it's a peanut butter shark! Hahaha, I want to thank seven-year-old me for that joke.

Once safely back on the Cassandra, the kids can't find their uncle anywhere. But as with most things you lose, it's always the last place you look. Billy and Sheena pull their uncle, who is covered in foamy slime, out from underneath a giant snail that has found its way onto the boat. Before everyone can piece together that the giant snail aboard the ship is of course the same tiny snail which once lived in Billy's fishbowl, more things happen.

The boat suddenly jostles to one side as something immense weighs down the other end. When the trio go to investigate, they spy Billy's pair of goldfish who are now the size of small whales and nearly capsizing the boat with their immense weight. Billy makes the following brilliant observation about his fish:

"You could really see them now that they were so big."

Wow, now I'm not sure which character sounds the most like a scientist! The three main characters wrestle with the giant fish and heave them off the boat.

I know what you're thinking: I can't believe it's Monday and the update was on time. Hey, shut up, because I meant the other thing you're thinking, about how this is turning out to be another sequel where the plot is just "Hey you know that thing, let's make it bigger and call it a book."

However, perhaps you, like me, are asking the immortal dramatic question, "Will there be more scientists?" Thankfully the answer is yes, as three unpleasant men show up on Dr. D's boat. The head man introduces himself as Dr. Ritter and asks the trio if they've seen anything unusual. Dr. D says no but then Billy blurts out about the giant goldfish. Dr. D tries to explain that the boy is confused and they were just two pillows, but Dr. Ritter has heard enough. He sends one of his henchmen to investigate the ship and the giant snail is discovered. Way to escargot! Wow, seven-year-old me is contributing a lot of material for this update.

Dr. Ritter lays out his Eight Simple Rules For Discovering My Secret Experiment, the main gist being don't. Dr. Ritter had developed the special magical plankton using science to make fish bigger and end world hunger. Like most scientists, Dr. Ritter follows his humanitarian speech with the attempted murder of children. Billy starts to protest but Dr. Ritter says, "Shut it. Get up. Move along. Move it on the double. 'Cause if you don't you're in deep, deep trouble."

But Dr. Ritter gets homicidetracked when Sheena notices an attack from above: Seagulls! Gull attacks can be thrilling

But not in RL Stine's hands. These gulls ate the enchanted plankton, thus they are so big as to just be ridiculous. While the Rodan-sized birds distract the evil scientist's henchmen, Billy and his family escape on a lifeboat. Then the lifeboat is lost at sea. Then they land a deserted island. Hey, that reminds me of a certain ABC Drama just begging to be evoked and punned: I bet once they get settled on the island, they're gonna relax and get Eli Stoned.

The book engages in every desert island cliche imaginable-- Do you even have to ask if there's a coconut tree? At one point Sheena proudly claims to have caught a giant silverfish, which is disgusting and doesn't say much for the editors at Scholastic that they didn't realize the difference between writing "silver fish" and "silverfish."

At some point during all this, Billy utters the following immortal line:

"I feel like I'm living in some kind of dinosaur world," I said. "Only instead of dinosaurs, we're surrounded by giant sea creatures!"

Two giant dolphins wash up on the shore and one gets tangled up in a rope hanging from the lifeboat. The three hop in the boat and are taken on a wild dolphin-driven ride through the sea. I like Goosebumps books because they're so scary!

Somehow Dr. D and the kids wind up back at their boat, only to find Dr. Ritter has taken up residence. He greets the family and escorts them into Dr. D's lab. Dr. Ritter reveals that the enchanted plankton has a serious side effect: whenever it is ingested by a human, the human turns into a fish for life. Folks, this is the climax of the book.

Dr. Ritter forces Billy to choose a bottle(?) of plankton and down its contents. Billy attempts to distract him by turning around and fussing with some pillows in order to give the impression of having turned into a fish, but Dr. Ritter forces him to drink the potion. Billy does, but he doesn't turn into a fish.

Dr. Ritter grows frustrated and a fight breaks out between the two scientists. Dr. D tries to hold Dr. Ritter down on the deck of the ship but he breaks free, grabs some plankton, and swallows it before Dr. D can call the police. Dr. Ritter then indeed does turn into a fish and merely swims away. Now that's how you end one of these books.

But the Twist is:
Sheena asks Billy why he didn't turn into a fish. He explains that his revenge against Sheena was that he was going to pretend to drink the plankton-- surely RL Stine knew that plankton wasn't a beverage right? Billy threw out the liquid plankton from one of the bottles and replaced it with iced tea. Sheena begins to laugh because improbably she had done the exact same thing and had planned to prank Billy in an identical manner. So it's hereditary. Sheena then takes a big gulp from another bottle, which is predictably followed by her being unsure she picked the right one.

the Platonic Boy-Girl Relationship:
Billy Deep and his sister Sheena again, who disappears into a jellyfish a third of the way into the novel.

Questionable Uncling:
What kind of crazy man leaves all those dangerous pillows laying around where they could be mistaken for anything but pillows?!

Memorable Cliffhanger Chapter Ending:
Ch. 26/7:
Billy and Shena fall into the claws of a giant crab. Only they actually fall into the sand where there crab was before he left.
Oops I forgot to mention the scene with the giant crab, didn't I? Quick, let me get my red pillow so I can recreate the scene for you in lifelike detail.

Great Prose Alert:
But I felt it. That whiff of danger.

Conclusions:
This is what I get for criticizing the first Deep Trouble, which, while not particularly good, at least wasn't abysmally awful like Deep Trouble II. This is the worst sequel in the original series behind Monster Blood IV-- and so of course that means it's one of the books to garner another round in the Horrorland series.


In case you missed the hilarity below, Blogger Beware's new URL isBloggerBeware.com. The old links should still redirect, but it's a good idea to update your bookmarks and start figuring out what to do about your "twistending.blogspot.com" bicep tattoo.

i am a Muslim and as a muslim i try to be as good of an example to others as i can. i try to pray 5 …

Image Courtesy:https://pixabay.com/en/mask-carnival-venice-black-cute-1150221/ You stared in the mi…