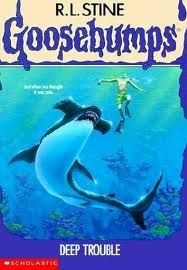 Front Tagline: Just when you thought it was safe...
(If that tagline were one word longer, Scholastic would be cutting Universal a check)
Back Tagline: Don't Go In the Water!

Official Book Description:
Billy and his sister, Sheena, are visiting their uncle Dr. Deep on a tiny Caribbean island. It's the perfect place to go exploring underwater...and Billy's ready for an adventure.
There's only one rule to remember: Stay away from the coral reefs. Still, the reefs are so beautiful. So peaceful. Billy can't resist.
But he's not alone in the water. Something's lurking deep below the surface. Something dark and scaly.
Something's half-human, half-fish....

Brief Synopsis:
Siblings Billy and Sheena Deep are spending their summer vacation on the Caribbean island of Ilandra with their uncle. And yes, their uncle is of course a scientist. Though his name, Dr. Deep, is about the coolest name any scientist could hope for, he simply goes by Dr. D. Perhaps to ride the coattails of that other well-respected Dr. D?

As the book opens, Dr. D leads the kids on a tour of his boat, theCassandra. The reader is given some lectures about dangerous aquatic life, such as jellyfish and sting rays. Naturally this was before the Steve Irwin tragedy-- I'm of course referring to the Crocodile Hunter: Collision Course.

Scuba's natural, scuba's fun, scuba-diving is best when it's one-on-one, so Billy and his diving partner Sheena tag-team underwater. However, Billy gets carried away and begins exploring near the coral reef, which had earlier been forbidden to approach by Dr. D. As soon as he drifts over to the reef, Billy is startled to encounter a horrible octopus with "at leasttwelve tentacles"-- Sounds like Billy should explore a dictionary next.

Billy starts thrashing around in the water and Dr. D jumps in to save him. Billy tries to tell him about the twelve-tentacled monster when Sheena emerges and reveals that she was the one grabbing him. Dr. D thinks Billy had just mistaken the ten year old girl with, you know, two arms, for the twelve-tentacled giant underwater monster. No one is ever stupider in these books than the scientist.

Billy gets furious and returns to the water for a swim race. He figures a great shortcut to win the race would be to swim across the poisonous fire coral reef. He realizes his mistake only after his foot brushes against some of the coral and he howls in pain. Dr. D scolds Billy and tells him that had the coral's poison gotten into his bloodstream, he could have been paralyzed-- in other words, just say no to reef'.

Dr. D's assistant, a muscular graduate student named Alexander DuBrow, serves up lunch to the kids: chicken salad sandwiches. Only his cooking's terrible so Dr. D offers to grill some fish for dinner. Wow, fish, way to use your imagination.

Billy overhears a private conversation between Dr. D and representatives for the Marina Zoo. The zoo crew wants Dr. D to find and trap a mermaid that has been reported in the area. Dr. D tells the zoo that he's got offers from other zoos to find unicorns, leprechauns, sasquatches, and other animals which don't exist, so they better sweeten the pot. The zoo offers Dr. D the princely sum of one million dollars. And these are 1994-Dollars, so that's like, one million dollars. Billy is so excited about all of this that he forgets the basic mechanics of a door and falls into the secret meaning mid-eavesdrop. Dr. D and Alexander make Billy promise not to tell anyone.

Billy is either too excited to sleep or unsure whether "anyone" includes the sandman, so he goes out early to search for the mermaid. Because if there's a mermaid in the entire ocean, it's going to be located fifty feet out from the boat? As it deserves a quiet night, Billy's nightswimming is rudely interrupted by the sound of fear as a hammerhead shark wrecks Billy's mermaid hunt. God, that happens to me every time I go mermaid hunting.

The shark begins to encircle Billy. The hammerhead proceeds to butt him out of the water and then takes hold of Billy's leg with its teeth. Billy makes a break for the fire-burning coral and hops on top. Before the shark can eat him though, the mermaid shows up and scares the shark away with her fin. Does it get any more emasculating than letting a girl and a fish fight your battles for you? The mermaid heals Billy's reef-induced wounds and the two frolic gaily in the water.

Billy realizes she looks to be about his age, though he doesn't know enough about marine life to convert that into fish years. But luckily Dr. D does and he nets up both Billy and the mermaid and drags them onto the deck of the ship. Billy tries to argue that the mermaid saved his life, to which his uncle replies, "Don't be silly, mermaids don't exist. Oh right." However, apparently the D stands for dinero and Billy's uncle throws the mermaid into a large glass tank on the deck until the zoo crew arrives.

The book drags a bit as the reader is treated to some slices o' mermaid life. At one point Billy amazingly tries to feed the mermaid chocolate chip cookies by dropping them into the tank and letting them drift to the bottom. Eventually he stumbles upon the idea of feeding her raw fish-- believe it or not, there are pages between Billy trying to feed the mermaid cookies and feeding her fish. After Billy feeds the mermaid some raw squid Alexander had been marinating, Alexander remarks that he's glad that someone enjoys his cooking, although I think he means he's glad someone enjoys the ingredients he intended to cook-- which is a bit like walking into a grocery store and looking for thanks from every customer.

Billy is enjoying dreams of Sea People when his slumber is interrupted by the sound of crashes and a Splash. Above deck he discovers the Little Mermaid is in the process of being kidnapped! Though he's not quite inthe Thirteenth Year of age, Billy tries hard to stop the four masked men from taking away his Aquamarine dream girl. The men really seem set on taking the She Creature though, so they brutally toss Billy into the tank. Billy starts yelling for Alexander, as Dr. D is knocked out on the floor and Sheena is offering no help against the four burly men. Finally Alexander does show up, only to side with the thugs.

Here's where the book gets a little questionable, as Billy and the other characters insist on calling the thugs "kidnappers," even though it seems to me that Dr. D was equally guilty of kidnapping the mermaid from the ocean. The thugs toss Sheena and Dr. D into the tank, lock it, and then throw it into the water. The top of the tank is meshed, so the three characters inside the tank fight to break the locks before the tank submerges completely underwater. As they struggle, the "kidnappers" and Alexander speed off, mermaid in tow.

Just when things look their worst, a myriad of mermaids appear and hoist the tank above the water level. Dr. D and the kids break open the latches and escape to the dinghy. Billy convinces Dr. D to follow the mermaids and rescue the mermaid from the thugs. They find the boat and spot the mermaid tied to the rear by a length of rope-- did one of these criminal sailors just get married? As the other mermaids rescue her, the thugs attempt to set fire to Dr. D's dinghy. This plan fails to do much damage as the small boat is, y'know, surrounded by water. The mermaid is set free, Dr. D and the kids prevail, and the novel understandably fails to deliver on the official description's promise of mermaid-driven menace. This flaw might be tied in with how mermaids are always cool and never scary. Just a hunch.

But the Twist Is:
Billy sneaks out by the coral again in hopes of catching the mermaid to say goodbye and maybe throw some more wet cookies at her. Unfortunately, he only finds the mysterious twelve-armed sea creature from earlier in the book.
Oh look, there's a sequel.

the Platonic Boy-Girl Relationship:
Billy Deep and his sister Sheena, whose body disappears into the water halfway through every chapter.

Questionable Parenting:
Billy's uncle is so obsessed with being near the water that several Christmases ago,when Dr. D visited his family over the holidays, he spend most of Christmas Day inside the bathtub. Well, clearly this is the man you put in charge of children, unsupervised.

Troy McClure Alert:
"He isn't married and doesn't have any kids. He says he's too busy staring at fish."

Let's Think About the Title of the Book Alert:
The book's protagonists are named Billy and Sheena Deep and they're always getting into trouble-- hey, wait a minute... their name is... and... wait, give me a second... oh my God, that's just like the title of the book:Billy and Sheena.

Memorable Cliffhanger Chapter Ending:
Ch. 15/16:
Oh no, the mermaid is dead. No wait, she's only crying. I'd cry too if I was kidnapped by a crew stupid enough to confuse the two.

Great Prose Alert:
"Last one there is a chocolate-covered jellyfish!"

Conclusions:
In case you hadn't figured it out, this was another of Stine's Hardy Boys-type adventure stories. However, the children's menu at Red Lobster is more exciting than Deep Trouble.

i am a Muslim and as a muslim i try to be as good of an example to others as i can. i try to pray 5 …

Image Courtesy:https://pixabay.com/en/mask-carnival-venice-black-cute-1150221/ You stared in the mi…