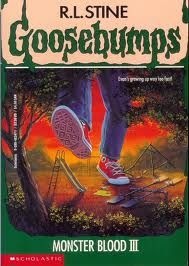 Front Tagline: Evan's growing up way too fast!
Back Tagline: It's The Slime That Never Dies!

Official Book Description:
Evan can't stand baby-sitting his genius cousin, Kermit. Kermit refuses to play video games. He won't even play Frisbee! All he likes to do is hang out in the basement doing strange experiments and playing mean practical jokes on Evan and his friend Andy.
But now Andy's found something that will teach Kermit a lesson once and for all.
It's green. It's slimy. And it comes in a can marked... Monster Blood!

02 Andy tricks Evan into thinking she put Monster Blood in his sandwich. Evan reacts by
A Turning into a giant, gets drafted by the Sonics
B Laughing it off. After all, she's his friend and he's no idiot
C Screaming and panicking. After all, he's an idiot
D Turning into a werewolf

03 Evan has to babysit his younger cousin Kermit. Kermit conveniently lives next door to what Monster Blood IIcharacter?
A Mr. Murphy
B Cuddles the hamster
C Conan Barber
D Robbie Greene, who was a werewolf

04 Kermit performs complex science experiments, even though he's only in grade school. This is plausible because
A The Atlanta school system is generally considered the barometer by which academic excellence is measured
B Kermit's mom was Rosalind Franklin's lovechild
C It isn't plausible, this is a Goosebumps book
D Werewolves have a keen interest in science. Because Kermit's a werewolf you see. Get it, all the D answers involve werewolves

05 Kermit concocts a potion to cure his dog's case of
A Amnesia
B Bubonic plague
C Hiccups
D Werewolfitis. See, I told you, werewolves again!

06 Kermit's potion
A Succeeds. Kermit is scooped up by Pfizer, forced to wear ladies' lab coat until he hits puberty
B Fails. The dog explodes like that girl in Cloverfield. Oops, ***Spoiler Alert***
C Succeeds then fails, as the dog starts running around like... a dog
D Turns the dog into a werewolf. These are kind of getting stupid by this point

08 Andy is really nice to Kermit because
A She's a good person, like Michelle Williams in Land of Plenty, only without an Apple giftcard
B She's trying to bilk him out of money via an elaborate Ponzi scheme
C She wants him to do her math homework
D She's a werewolf. Gotcha, you thought I was gonna quit but then, BAM, another werewolf answer

09 Conan hassles Evan because Evan
A Is Evan, it's just inevitable
B Was looking at Conan's lawn
C Both A and B
D Is a vampire. See what I did there, the ol' switcheroo!

10 Andy discovers that Kermit gave her the wrong answers to her math homework. Her logical conclusion is that in retaliation, she and Evan should play a trick on him involving
A Shivs in the prison shower
B Andy's twin sister whom she only just met at summer camp
C Monster Blood
D Werewolves

13 Conan beats up Evan. Since he refuses to hit girls, Conan retaliates against Andy by
A Borrowing her widescreen copy of Mean Girls and returning the fullscreen version
B Spoiling the series finale of Designing Women
C Throwing her high atop a tree
D Holy cat, do you realize that was the correct answer

14 Andy sneaks some Monster Blood into one of Kermit's potions while Evan distracts him by
A Regaling him with the plot of Aces: Iron Eagle III
B Getting beat up again, this time by the mailman
C Eating a chocolate bar
D Performing a traditional Mummenschanz routine

17 The Monster Blood causes Evan to
A Achieve self-actualization. Andy gives him a congratulatory plaque for achieving the highest level of Maslow's Hierarchy of Needs
B Consider the lasting impact of the Treaty of Taipei on Taiwan's independence
C Grow
D Question whether or not Best New Music holds any weight

18 Evan escapes out of the house and spies Conan terrorizing some neighborhood kids in a surprisingly violent fashion. What is Conan doing to the kids?
A Throwing chainsaws at them
B Summoning lightning bolts in their direction
C Waving a baseball bat and threatening to hit them
D Playing them the new Mars Volta album

21 Conan gets revenge on Giant-Evan by
A Beating up his little toe
B Taking Monster Blood-- on a date. That'll make Evan so jealous!
C Calling the fire department to hose-down Evan
D Jesus christ

22 The firefighters and police think Evan is
A Really lame
B Too large to be David, too small to be Goliath. They consult Biblical scholars for another, more appropriate scriptural reference
C An alien from another planet
D An alien from Mexico, where's his green card

23 Evan runs away and hides
A In Chelsea, opens a hip mattress store
B On a train with an all-woman band, "forced" to dress in drag
C Behind some lumber
D In plain sight, makes noises like a building

24 Evan thinks of a solution to his predicament by recalling that earlier, Kermit gave Andy a potion that
A Somehow caused Evan to die in a fire, making Andy the lead character
B Turned even her skin a Day-Glo color, thus fulfilling her lifelong dream
C Shrank her mosquito bite
D Induced her first period

25 While Kermit gets to work concocting a new shrinking potion for Evan, Andy has her priorities straight: She
A Decides it's now or never to start reading the Brothers Karamazov
B Calls the local five and dime to see if they have Prince Albert in a can
C Cleans up the mess they made inside the house so Kermit's mom won't be upset
D Stops to consider the plausibility of the events occurring, resulting in the universe folding in on itself

26 Kermit's mixture doesn't cause Evan to shrink. Instead, Evan
A Sees a shrink and talks out his feelings
B Agrees, Pepsi-Cola is the better tasting beverage
C Turns blue and can't stop hiccuping
D Gets beaten up by Rodan

27 Kermit fixes the potion. This time the potion
A Turns Evan straight
B Shortsheets Evan's bed and stifles its laughter from the top bunk
C Causes Evan to grow feathers
D Does some other shit to pad the page length

28 Just as the cops pull into the driveway, Evan is given a third potion. This potion
A Lacks the tangy zip of Miracle Whip
B Makes him snort like a pig, causing the cops to draw their weapons
C Shrinks him back to normal size, thus ending the extended the Sword In the Stone homage
D Turns him into a werewolf

BONUS QUESTION
After another (!) dream sequence, Evan awakes to discover that to his horror
A The wheels have come off his race car bed
B It's still several years until Two Guys, A Girl, And a Pizza Place will be created
C He's still shrinking
D RL Stine actually gets paid for this garbage

Great Prose Alert:
Out of the corner of his eye, Evan saw a monarch butterfly fluttering over the low hedges. I wish I were a butterfly, he thought.

Conclusions:
There's a reason no one could remember what happened in this one beyond what the Honey I Blew Up The Kid-aping cover promises.Monster Blood III is probably the least-plausible book in the series, and sister, that's saying something.