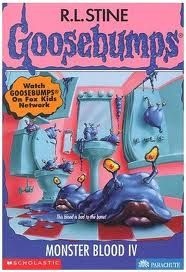 Front Tagline: This blood is bad to the bone! (What.)
Back Tagline: It's Four Times As Evil!

Official Book Description:
Evan Ross can't forget about Monster Blood-- the evil green slime that never stops growing. It can turn ordinary pets into ferocious animals and twelve-year-old kids into freakish giants.
But now there's a new kind of Monster Blood in town. It comes in a can just like the others. Only difference is this slime is blue instead of green. And instead of just growing, it's multiplying-- into terrifying blue creatures with razor-sharp teeth....

Brief Synopsis:
In the past 48 hours I've read Monster Blood IV and spent five hours in a dentist chair getting emergency dental surgery. I only look back on one of these events fondly, and I'll give you a hint-- it ain't the Goosebumpsbook.

Monster Blood IV doesn't begin with a dream, but rather a nightmare for the reader: the promise of another 118 pages with some of if not the most obnoxious characters in the Goosebumps universe. Andy stopped being a worthwhile character after the second book and that her role in this book is basically to wear neon colors and act like every other female character before her is the biggest indictment against Stine and this series I can muster. Turning one of the few good things to come from Stine's poison pen into a bland preteen via reverse-alchemy is only the first of many nails in the coffin of this series. For make no mistake, Monster Blood IV is not a bad book. It transcends bad. It makes the worst books in this series seem retroactively competent. Monster Blood IV arrives on the same plane with Chicken Chicken, as a repulsive abomination against literature.

If the last two sequels in this series were only thinly-veiled regurgitations of what preceded them, fret not-- Monster Blood IV is more of the same. In fact, at a certain point it reads like a parody of the series itself. Hey, remember how Evan was like a giant twice and also there was a giant hamster and stuff? Well cool, because no one else seems to mention it except in passing.

Evan's parents are going out of town for a week to Tucson-- wait, are Evan's parents Laura Linney and Philip Seymour Hoffman in the Savages? Inbreeding would explain a lot with this character. Because you must be This Old to visit Tucson, Evan is dumped at his cousin Kermit's house. If you think this means more "hilarious" cribbing from Dexter's Laboratory science experiments, well, these entries sometimes write themselves don't they? Kermit's latest experiment is to place tarantulas on Evan's head. Guys I've heard of Spider-Man but this is ridiculous! But seriously folks, this book sucks shit.

Kermit's mom cooks a lot of spicy food, which leads to a passage wherein Evan anticipates Paris Hilton by seven or eight years by realizing that the spaghetti he's being fed is hot. How hot is it, Troy? It's so hot that Evan's lips swell up like "twin salamis," in yet another example of Stine giving a preteen character Borscht Belt dialog.

Speaking of meatheads, Evan naturally runs afoul of Kermit's next door neighbor, the school bully Conan. Conan stomps his sneakers on Evan's feet and complains that Evan has just gotten the bottom of his new sneakers dirty. Conan avenges this injustice by pulling on one of Evan's sweater-sleeves. This is a good example of something to mention the next time someone defends this series.

Andy comes over to visit Evan and the three kids have a Super-Soaker fight. This is a lot of fun until Kermit sprays Conan's sneakers with water. Conan crosses the yard and sees that Andy has a can of Monster Blood. He forces her to give it to him and, I shit you not, he opens the can and paper snakes come out. Conan doesn't beat the kids up, probably because he's embarrassed for them.

Conan comes over to see what the hubbub is all about and he too gets shocked. Rather than protesting that what just occurred could not have physically happened, he merely beats up Evan. This was in the dark days before the internet gave kids a non-violent outlet for their rage. Had the book been written today, perhaps Conan would have not used his fists at all but rather his typing-fingers, channeling all his rage into bitching on the Rotten Tomatoes message board.

Kermit is sympathetic to Evan's plight and presents him with the perfect revenge: he's developed a hair-growing formula. Oh great, now Stine's cribbing from the Peanut Butter Solution. Kermit tells Evan that they could put some on Conan's hands, giving him "werewolf hands." Did you think this series would pass up a chance to somehow include werewolves one last time? Evan thinks giving Conan Robin Williams hands is a great idea, and the highest dramatic question of the book becomes "Will a preteen character grow hair where there was not hair before?" Watch out, Judy Blume.

Andy shows up at Evan's window in the middle of the night. Evan's such a loser that he can't even make a move and the two end up talking in Kermit's yard. Andy shows him another can of Monster Blood that she found in the dumpster behind a science lab. She wants Evan to get revenge on Conan by using the new Monster Blood. Kermit shows up for no reason and opens the new can of Monster Blood. Hey, speaking of people showing up for no reason in the middle of the night, Conan also comes out into his yard and tries to take the Monster Blood, only to be shocked again by the fence. Conan retreats into his house and Andy tries to put the lid back on the Monster Blood, which is blue instead of the usual green.

Except the liquid Monster Blood has morphed into a small blue creature with black eyes and a big-lipped mouth filled with sharp teeth. Andy thinks the gelatinous creature is cute until it hops across the yard and latches onto the water spout. The creature swells up like a balloon with water until it explodes, sending a wave of blue slime over the kids. Where there was one creature there is now two. And it goes on like this for at least thirty pages, with the creatures running round in the yard, wreaking havoc and ingesting water to multiply. The creatures continue splitting, with each subsequent pair becoming meaner than the creature that spawned it.

The creatures start attacking the kids, trying to suck the water from their bodies. One latches onto Andy's face and another on Evan's shoulder. The kids try to force the dozen or so creatures into a plastic garbage sack. Kermit takes the sack into the house to hide it as Kermit's mom comes out to blame Evan for all the damage the creatures have wrought on her yard.

The next morning, Evan asks Kermit where he hid the sack of creatures. Kermit doesn't appear to be much of a boy genius after all, as he hid the sack of creatures in the spare bathroom. Evan freaks out because the bathroom has four water fixtures and as the two boys make their way towards the bathroom, they can already hear the havoc being wreaked within. Oh and also that spare bathroom is where Kermit was hiding his hair growth formula, so when the door is finally opened, the two are greeted with the sight of dozens of angry hairy creatures. Slime covers the walls and every few seconds there's another sickening *pop* and wave of slime as new creatures are formed.

Evan decides to round up the creatures and then lead them out into the yard to zap them on the invisible electric fence. As the peeved piper leads the monsters to the edge of the yard, Evan is shocked alright-- shocked to discover that Kermit forgot to turn the fence on. The horrible little creatures escape into the neighborhood. Naturally the first place they head is Conan's house, where Conan has of course just stepped out into the yard again-- does he just wait by the front door for any excuse to come running out? The creatures swallow his can of Coke and start multiplying and exploding slime all over him.

Andy shows up and her and Evan track down the moving wave of monsters down the street as they head towards a public park. Along the way the monsters almost kill Kermit's dog and finally engulf Andy and Evan until-- they all swarm off and huddle into one big pulsating ball. The monsters are so vile and evil that they've started to attack each other. One by one they eat each other until one until there are no creatures left, which isn't possible unless one of the monsters ate itself but hey who cares about that because look who just showed up looking for the blue monsters: A scientist wearing a space suit. He introduces himself:

But the Twist is:
Conan comes out into the yard, again, and tells the kids that he found that blue candy they were hoarding. Then another Conan comes out of the house. Well, at least now they can alternate shifts.

the Platonic Boy-Girl Relationship:
Yet again, Evan Ross and Andy, who stopped being interesting halfway thru the series.

Questionable Aunting:
Evan tries to tell Kermit's mom about the monsters, but even characters within the story are too bored to pay attention.

Memorable Cliffhanger Chapter Ending:
Ch. 10/11
There's a giant mouse at the window! No, that's just the one person who looks less like a mouse than anyone ever has, Andy.

Great Prose Alert:
"It's candy," he told Conan. "Blue Fruit Roll in a Barrel. We saw it on TV, and it's awesome."

Conclusions:
Imagine it is 1997 and you are RL Stine's biggest fan. You're only between the age of eight and twelve but for as long as you can remember, you've read RL Stine's Goosebumps series. Through the good times and the bad, you gave Stine more chances than anyone has ever deserved. You bought every Goosebumps booklight, calendar, and Curly-emblazoned trinket available. You hung around your elementary school book fair and leaned in to tell the cute members of the opposite sex which Goosebumps books were the spookiest. You somehow, amazingly, made it all the way toMonster Blood IV, the 62nd and last Goosebumps book. What was your reward? A big "Get Fucked" from RL Stine.

Rejoice, our long national nightmare is finally at an end. See you next week!