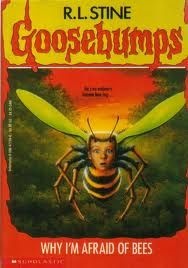 Official Book Description:
Gary Lutz needs a vacation...from himself. Bullies are constantly beating him up. His only friend is his computer. Even his little sister doesn't like him.
But now Gary's dream is about to come true. He's going to exchange bodies with another kid for a whole week.
Gary can't wait to get a new body. Until something horrible happens. And Gary finds out his new body isn't exactly human....

Our protagonist Gary Lutz is enjoying a summer afternoon by himself, reading comics. He has no friends and is so clumsy that everyone at school refers to him as Lutz the Klutz. Despite the appealing rhyme scheme, based on my memories of middle school, I suspect his classmates actually called him far worse than that.

So Gary spends the July afternoon like most kids his age, spying on his next door neighbor. Is it a pretty girl he's peeping? No, it's the middle aged bee farmer and his bee hives. Because bee farmers often do their bee farming in a suburban backyard. Gary gets worried when he sees the bees overwhelm the bee farmer, Mr. Andretti. Mr. Andretti calls out, "Mama-Mia, Imma poorly-conceived angry Italian stereotype constructed by a sheltered white man for white children to read about! Also, the bees, they are a'attacking me! Run!" Gary does run and then Mr. Andretti mocks him for falling for his joke. Hey, aren't jokes supposed to bee funny?

The novel seems to bee in a race to emasculate Gary, as this is followed by Gary getting picked last in softball. They make a special rule for him that he can get four strikes beefore he's out and sure enough, he justifies the need for special rules. He then runs home crying, only to run into a trio of bullies who beeat him up. Upon arriving home, his younger sister Krissy also makes fun of him, with his mother chiming in to laugh at her daughter's scoring points off her son. Guys, it's pretty subtle, but in case you hadn't figured it out: this kid sucks. Gary makes Evan Ross look like Zack Morris.

Gary is doing no better in love either. He has a crush on the beeautiful Judy and thinks she's cuter than Amy Adams at the Oscars last night (as if such a thing were possible), so to impress her he starts hot-dogging on his bike. Unless she is the sort of girl who gets impressed by nerds who almost get hit by a car and spill-out into the street, his plan fails.

Back at home, Gary seeks solace on the internet-- Now I understand why the book is so popular. Reading an online bulletin board, he spies a message from a local business advertising a bizarre vacation. Clearly not a cautionary tale about internet dangers, Gary goes unescorted to the address in the ad. The shabbee building houses an office that reminds Gary of a dentist's, only with slightly better odds of not beeing anesthetized and molested inside. Inside a woman speaks to him via a microphone from beehind one of those protective glass shields found in banks and gas stations. For some reason, Gary still thinks it's a good idea to go into the back office. The director of the space-age vacation business, Ms. Karmen, explains that kids who sign up switch places, literally. The book gets more questionable as he's shown a binder of pictures of kids and asked who he'd like to put himself inside.

Ms. Karmen takes Gary's photo and the novel basically becomes that Gordon Jump episode of Diff'rent Strokes. A few days later, Ms. Karmen calls Gary at home and asks if she can come over. Gary thinks this is a great idea beecause his parents and sister are out of the house. Oh no. Ms. Karmen arrives and Gary tells her he'll bee right down, he just has to finish drying his hair. Ms. Karmen enjoys a cookie in the kitchen when

"So, did you have any trouble finding the place?"

But srsly folks, Ms. Karmen tells Gary that she's found a muscular skateboarder named Dirk Davis who wants to get inside Gary to get good at math. False sexual entendres aside, let's think about this: The premise of the program is that kids switch minds and live in another body for a week, so how is Dirk in Gary's body going to bee any different than Dirk in Dirk's body as far as math prowess goes? A bee flies into the living room as Ms. Karmen sets up her equipment. Ms. Karmen activates the switching process and Gary has switched places all right: he's switched places with a bee that flew into the room. Yet it's Dirk Davis in Gary's body.

What follows in the book is about seventy pages of bee adventures. I literally just read the book and can barely remember any of them. There's a scene where Claus the cat reaches up and grabs Gary the bee with one single paw, which is impossible but still more possible than Gary becoming a bee. The book mainly indulges in passages that smell suspiciously like learning, as Gary remembers back to a book on bees he read and applies his knowledge to his current situation. Applying knowledge from what you've read is a great skill and one I endorse. I'll never forget that time I was taking piano lesson that were simply murder on my hands and I thought back to what I'd read and remembered that RL Stine is a horrible writer.

Yet for all the book's beeguiling attempts at teaching science, I guess Stine skipped the chapter on how bees don't have voices, as Gary flies into the vacation offices and, utilizing the microphone, pleads for the receptionist to make Dirk give him back his body. The receptionist tells him to go back to the hive and wait. God, even in books for kids, receptionists are just the worst.

Gary spies Dirk's address and goes to see the Human-Dirk, who has of course been occupied by the bee Gary is occupying. Gary spots Bee-In-Dirk in Dirk's backyard, trying to lick the pollen from flowers. Bee-In-Dirk tries to kill Gary the bee and something something I am just so tired of this book.

Gary takes matters into his own hands, first by typing a message onto his computer. When that doesn't work, he flies into Dirk-In-Gary's ear and pleads for Dirk to give him back his body. It turns out Dirk-In-Gary can hear Gary just fine as some of the bee cells combined with DNA during the switch. Wow that is not even close to how science works. Dirk-In-Gary tells him to buzz off, as he's having the time of his life turning Gary from a pussy to a pussy magnet. Dirk-In-Gary reveals that he has even been giving skateboarding lessons to Judy and her friends down at the park. I've seen Kids and I know what that means. He has also beat up the three stooges who were always beating him up and befriended Claus the cat.

Gary is so frustrated that he flies back to the hive, rounds up all the bees, and leads a swarm into Dirk-In-Gary's bedroom. Dirk-In-Gary doesn't freak out like Gary wants him to so Gary makes the ultimate sacrifice by stinging Dirk-In-Gary on the nose. As soon as he does it, he remembers that bees die after using their stinger. Gary the bee falls to the floor and fades to black.

When Gary awakes he looks down at his body and sees his human form. As if the book weren't insulting enough, apparently when you die you return to your original form? It's not explained, though Gary does look up Dirk and he apologizes for hogging Gary's body. So I guess via the program you can just switch bodies with someone, kill them, and then you'll bee returned to your original body? Well, even then Person-To-Person Vacation's method is still a slightly better business model than AmWay.

But the Twist is:
Gary is adjusting to all the positive changes Dirk imprinted in his life, but he still takes time to stop and smell and taste the flowers with his tongue. Beecause he's still like a bee or something? Jesus, this book.

Questionable Parenting:
When her son can't unscrew a jar of peanut butter, she quips, "I guess you forgot to eat your oat bran this morning!" Zing?

Memorable Cliffhanger Chapter Ending:
Ch. 19/20:
Gary the bee grimaces as a dragonfly bites him in half. Well, actually, the dragonfly doesn't bite him in two, Gary the bee jumped to conclusions. Oh great, even the insects in these novels have an overactive imagination-- everyone but Stine apparently.

Great Prose Alert:
I AM NOT BEE. I AM GARY. HELO ME.
(Which is great beecause why did the bee include periods when typing the above?)

Conclusions:
The book ends with Gary-In-Gary calmly releasing the swarm of bees from his bedroom, begging the question: Why isn't the book called Why I'm Not Afraid of Bees? Though an even better title might bee Don't Read Me.

Why do i try maybe I am stupid…

Rules of life Do not cheat any one. Always respect others.…