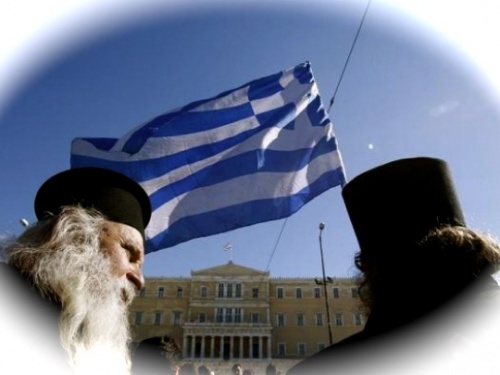 Reflecting how pain of austerity and shrinking economy is being felt by many Greek citizens and being translated into social discontent and perhaps spiraling unrest, the Greek Orthodox Church – Archbishop of Athens has effectively stepped into fray regarding whether the Parliament should adopt further measures as demanded by Brussels, IMF and private creditors. We can simply attribute it as another manifestation of populism. However, I do see it as more than a mere complaint. It reflects the fundamental question of what is future of Eurozone or more accurately is the EMS (European Monetary System) a partnership of equals? Greece clearly does not feel as equal, and many Greeks are angry at Berlin and Brussels, although of course their leaders and constituency carry much responsibility for current situation. In Greece the church has significant influence, and by no means do I assume that it is always positive. (See war in Bosnia & Herzegovina). Any religious institution/church can reflect many underlying tides and perhaps not all flowing consistently with most noble sentiments. However, the Greek Church reflects both the pain and frustration felt and has channeled the feelings appropriately to reflect upon the cost of current austerity and other measures now called upon by Greece’s EU partners. Read our Report: - “Another Groundhog Day: Greece Default Coming?” - diplomaticallyincorrect.org/films/blog_post/another-groundhog-day-greece-default-coming/45285 Again, it is difficult to balance the sins of the past with the contrition called upon from Greece. That’s not the point though. Rather, will the Greek Church establish a European, perhaps global trend of religion institutions resisting current economic trends, some necessary but also other reflecting a reversion to old economic class stratification. Predatory capitalism is no longer so much about Charles Dickens portraits. (Read: -“Global Recession: Best of Times, Worst of Times” - diplomaticallyincorrect.org/films/blog_post/global-recession-best-of-times-worst-of-times-by-ambassador-mo/36338). It has evolved into a more dangerous beast, where the symptomatic images perhaps are not as dark but the implications more profound. Read: -“Financial Jungle: Can Anyone Leash the Predator?”- diplomaticallyincorrect.org/films/blog_post/financial-jungle-can-anyone-leash-the-predator-by-ambassador-mo/27281). Ambassador Muhamed Sacirbey - FOLLOW mo @MuhamedSacirbey Facebook-Become a Fan at “Diplomatically Incorrect”       Twitter – Follow us at DiplomaticallyX   “International Financial Crisis” Channel - diplomaticallyincorrect.org/c/international-financial-crisis

Receive passive income working with an eco-friendly business in europe