How Granada changed in the winter transfer window

Seven players and a new manager have joined FC Barcelona's next opponents in La Liga. 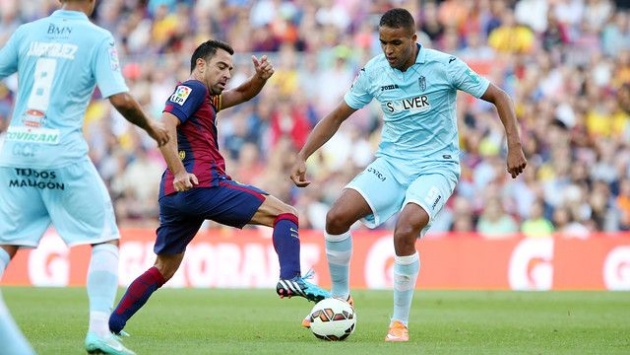 On Saturday at 4.00pm CET, FC Barcelona are at Los Cármenes to take on a new-look Granada. The Andalusians have made a host of changes since the 6-0 defeat at the Camp Nou, signing no fewer than seven new players in the winter transfer window and also changing their manager as they hope to turn around their ailing fortunes in La Liga. With the first team also hit by injuries and suspensions, there could be as many as eight different players in the Granada side with respect to the one that suffered such a heavy loss at the Camp Nou not so long ago.

Granada went for 18 games without a win, which eventually led to the departure of manager Joaquín Caparrós. He has been replaced by Abel Resino, who finally got the side back to winning ways againstElche (2-1) in his second game in charge. Five points from five matches, however, have only served to leave the team one point above bottom placed Cordoba.

Lass, Cala, Rubén Pérez, Robert Ibáñez and Candeias have all been introduced to the squad and could line up against Barça on Saturday, as could Agbo Uche, who has been promoted from the reserves and got his first run-out last week. Defender Insúa and striker Adrián Colunga are also new to the Granada team, but neither can play this weekend because they are serving suspensions after being sent off in previous matches.

Several of the eighteen players that were at the Camp Nou last September 27 will not be meeting the Catalans this second time round. Nounkeu’s contract has been terminated, Héctor Yuste has gone on loan to Mallorca, El-Arabi is yet another suspended player and Jeison Murillo and Piti are both injured.Riki and Sissoko, who weren’t picked for the game in September, are likely to step in as replacements.

The addition of no fewer than 21 players, coupled with the departure of just five, means that Granada have one of the biggest squads in the championship. Luis Enrique has used 22 players in 24 games so far, which an impressively large number in its own right, but the two Granada managers between them have fielded a gargantuan number of 34 different men.

Football is one of the most famous and popular game, played, watched and followed all around the Wor…