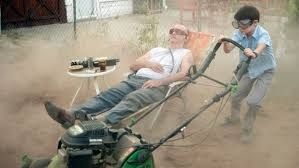 It takes a lot of work to have Bill Murray to appear in your movie. Although happy to help out real filmmakers like Wes Anderson or Jim Jarmusch, he plays hard to get for everybody else. Most stars have agents who run interference and negotiate the best price. Not Bill. I’m sure he has an agent, a cleaning agent maybe, but he prefers it if filmmakers who want to cast him leave messages on an answer phone. If he’s interested, he’ll call back. Otherwise, just take it as a ‘no’. This is what is commonly called taking a meal away from your representation.

So I imagined what young director Theodore Melfi had to do to get Bill to appear in St. Vincent, the story of a chronic gambler with debt and alcohol issues who builds the character of a young boy, Oliver (Jaeden Lieberher), the son of a single mother, Maggie (Melissa McCarthy) who just moved next door. Vincent is a slob, doesn’t try to make friends and cuts to the chase with deadpan sarcasm. It’s a gift of a part for the actor. All Melfi had to do was convince him to read the script.

‘Hi, my name is Teddy. Teddy Melfi. I’ve written this script that I’d really like your opinion on. I don’t need a quote or anything but I’ve written this part of Vincent. He’s kind of an older Peter Venkman – no, he isn’t. Sorry, I said that. I know what you think of GB3. I have no need of no Ghosts either. I would really like you to read it. You don’t need me to flatter you, but you are insanely good. Not insane, I don’t know why I said that. Any way it’s about this guy, Vincent, who is kind of old, who has hit rock bottom. His wife has dementia and he can’t afford to pay the bills. He has no friends – only creditors. He’s a chronic gambler and he drinks. He’s kinda stopped trying. I don’t mean to suggest that you’ve stopped trying, but I think he’s a guy you could inhabit. A coat you could wear. With holes in the pocket. The lining’s ripped. Anyway, call me – my number is 555 –‘

‘Hello. It’s Teddy Melfi. You may recall I left a message on this machine. I was watching you in Quick Change, crying on the inside kind of clown. I thought, yeah, let’s ring Bill. Check in on you. I thought maybe, if you are favourably disposed to reading material, you might look at my script, the one about the old guy who makes friends with a young boy. It’s kind of like The Kid, you know the Chaplin film, only it set in an Irish neighbourhood. I just want to tell you. It’s not sentimental. I know you don’t like that emotional crap. It’s a role of substance – you can even, dare I say it, do a bit of acting. I don’t want to give away too much, but you can pick up stuff with your feet. Anyway, my number is 555-‘

‘I’m embarrassed to call you, but I couldn’t sleep. It’s Teddy. I kind of worried that maybe you had fallen over or something. I showed my script to Sofia. She said you ought to talk a look at it. She says ‘hi’. Anyway, I’m the guy with the script, St. Vincent about the old guy who reconnects with the world through a little boy. He’s not a creep or anything, I know how it sounds. By the way, Sofia isn’t Sofia Coppola. It’s my talking parakeet, Sofia. She says she can make a better film than The Bling Ring. But that’s just the bird talking. Anyway, I figured I could schedule the film around the off season. I know you’re a sports fan. Although I hear mud wrestling like in Stripes is pretty much a 365 days a year activity. Anyway, please call. My number, yes, 555-.’

‘Hello, Bill. It’s Ted. Do you hear how right that sounds? We could have an excellent adventure. Or maybe just make a film. Anyway, I hope that you didn’t fall over because – yikes – that would be an insurance nightmare. Anyway, I’m the guy who has written a part just for you, St. Vincent and I would like to send you some sample pages – they don’t have to be consecutive, 3, 22, 41. They could be your lottery numbers. Anyway, big news! I mentioned to Naomi Watts’ agent that I was talking to you and she would be honoured to be your co-star. She would work for scale (apparently) which is a director’s dream. Of course, she was in King Kong, and worked at scale in that movie – big monkey hands, tiny actress. But she’s played Princess Diana and agrees that the role of a pregnant East European hooker is the next logical step. Anyway, she’s excited. I’m excited. I hope you’re excited. Please call. My number, if you don’t already have it, is 555-‘.

‘Wow, I met my first Weinstein today. Apparently there are two of them. They liked my script and said if I could get you to show a slither of interest, they would be on board. Well, not technically on board, but reserve a seat. It’s code. I don’t understand it. It’s Teddy, by the way, the St. Vincent guy. I know you like to sing, so I’ve written in this bit on a lounger where you sing along to your favourite song. Something counter-cultural. I’ll put it in the budget. It shall be a protected element. I’ve written this perfect line for you – ‘this meal beats hunger by a rabbit’. Needs some work! I would appreciate a call. I’m ready to believe in you. Can’t believe I said that. Anyway, the number is 555-.’

‘I am super excited. Melissa McCarthy would like to play the neighbour. I won’t let her steal the movie, but she would be honoured – ‘on – erred’, she makes it sound like two words, if you signed on. Not that we’ve reached that part of the journey. The cast is cooking really nicely. Don Cheadle has expressed interest. Chris O’Dowd from Club Apatow is giving it due attention. I’m just hoping for you, sir. My number is 555-.’

St. Vincent is in theatres in the UK and US; we call them cinemas – how strange...