Islamabad (/ɪzˈlɑːməˌbɑːd/; Urdu: اسلام آباد‎, Islāmābād, Urdu pronunciation: [ɪsˌlɑːmɑˈbɑːd̪]) is the capital city of Pakistan located within the Islamabad Capital Territory. It has a population of 2 million[3] and together with its neighboring twin city of Rawalpindi, the greater Islamabad-Rawalpindi metropolitan area is the third largest in Pakistan with a population of over 4.5 million inhabitants.[4]

Islamabad was built according to a carefully organized plan, divided into sectors along a grid of clean, tree-lined streets. The city is sheltered by the Margalla Hills, the foothills of the Himalayas and the home of rare species of leopard, deer, birds, and even porcupines. Several hiking paths end at Daman-e-Koh, a picnic spot with a splendid view of the entire city, including the massive modernist Faisal Mosque and even the Rawal Dam.

Since its foundation, Islamabad has attracted people from all over Pakistan, making it one of the most cosmopolitan and urbanized cities of Pakistan. As the national capital, Islamabad is the seat of the Government of Pakistan; the Presidential Palace (Aiwan-e-Sadr) is located here. Islamabad is also home to thePakistan Monument, which is one of the two national monuments of Pakistan. Islamabad hosts a large number of foreign diplomats, politicians and government employees. The Capital Development Authority is responsible for managing the public works within the city.

Islamabad is located in the Pothohar Plateau in the northeastern part of the country, within the Islamabad Capital Territory. The region has historically been a part of the crossroads of Punjab and Khyber Pakhtunkhwa with the Margalla Pass acting as the gateway between the two regions.[5] The city was built during the 1960s to replace Karachi as Pakistan's capital. Islamabad is a well-organised international city divided into several different sectors and zones. It is regarded as the most developed city in Pakistan and is ranked as a Gamma+ world city.[6]

Early history[edit]
Islamabad Capital Territory, located on the Pothohar Plateau of the Punjab region, is considered one of the earliest sites of human settlement in Asia.[13] Some of the earliest Stone Age artefacts in the world have been found on the plateau, dating from 100,000 to 500,000 years ago. Rudimentary stones recovered from the terraces of the Soan River testify to the endeavours of early man in the inter-glacial period.[14] Items of pottery and utensils dating back to prehistory have been found.[15]

Excavations have revealed evidence of a prehistoric culture. Relics and human skulls have been found dating back to 5000 BC that show this region was home to Neolithic people who settled on the banks of theSwaan River,[13] who developed small communities in the region at around 3000 BC.[14][16] One end of the Indus Valley Civilization flourished here between the 23rd and 18th centuries BC. Later the area was an early settlement of the Aryan community.[13] A Buddhist town once existed in the region.[17] Many great armies such as those of Zahiruddin Babur, Genghis Khan, Timur and Ahmad Shah Durrani used the corridor through Islamabad on their way to invade the rest of the Indian Subcontinent.[13] Modern Islamabad is based on the old settlement known as Saidpur. The British took control of the region from the Sikhs in 1849 and built South Asia's largest cantonment in the region.[17]

Islamabad Zones
When Pakistan gained independence in 1947, the southern port city of Karachi was its first national capital. In the 1960s, Islamabad was constructed as a forward capital for several reasons.[18] Traditionally, development in Pakistan was focused on the colonial center of Karachi, and President Ayub Khan wanted it equally distributed. Moreover, Karachi having tropical weather conditions,[19] was located at one end of the country, making it vulnerable to attacks from the Arabian Sea. Pakistan needed a capital that was easily accessible from all parts of the country.[20][21] Karachi, a business center, was also considered unsuitable partly because of intervention of business interests in government affairs.[22] The newly selected location of Islamabad was closer to the army headquarters in Rawalpindi and the disputed territory of Kashmir in the north.[13]

In 1958, a commission was constituted to select a suitable site for the national capital with particular emphasis on location, climate, logistics, and defence requirements along with other attributes. After extensive study, research, and a thorough review of potential sites, the commission recommended the area northeast of Rawalpindi in 1959.[20][23] A Greek firm of architects, Konstantinos Apostolos Doxiadis, designed the master plan of the city based on a grid plan which was triangular in shape with its apex towards theMargalla Hills.[24] The capital was not moved directly from Karachi to Islamabad; it was first shifted temporarily to Rawalpindi in the early sixties and then to Islamabad when the essential development work was completed in 1966.[25]

Recent history[edit]
Islamabad has attracted people from all over Pakistan, making it one of the most cosmopolitan and urbanised cities of Pakistan.[26] As the capital city it has hosted a number of important meetings, such as the South Asian Association for Regional Cooperation summit.[27] Year 2014 has brought in major changes in Islamabad. Construction of the Rawalpindi-Islamabad Metrobus began on 28 February 2014 and its expected to be completed by January 2015, with 60 buses initially plying on the route. The Rawalpindi Development Authority oversees the project with a cost of approximately Rs24 billion, which will be shared by both the Federal government and the provincial government of Punjab.[28] In October 2005, the city suffered some damage due to the 2005 Kashmir earthquake which had a magnitude of 7.6.[29] Islamabad has experienced a series of terrorist incidents including the July 2007 Siege of Lal Masjid (Red Mosque), the June 2008 Danish embassy bombing, and the September 2008 Marriott bombing.[30] In 2011, four terrorism incidents occurred in the city, killing four people, including the murder of the then Punjab Governor Salmaan Taseer.[31] Tragic air crashes also took place here: on 28 July 2010, Airblue Flight 202 crashed in the Margalla Hills killing all 152 flight crew and passengers on board[32] and Bhoja Air Flight 213 carrying 121 passengers crashed while making the final approach for landing, killing all on board on 20 April 2012.[33] 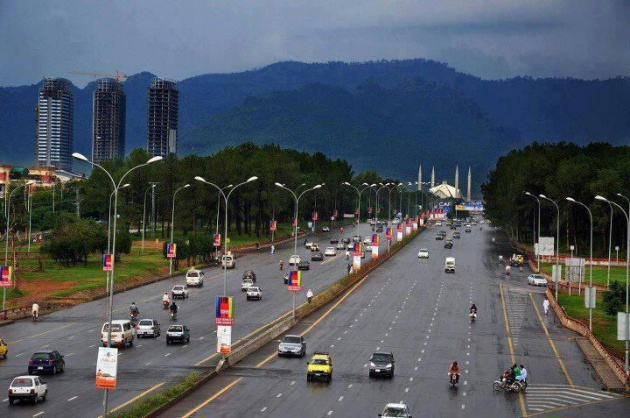