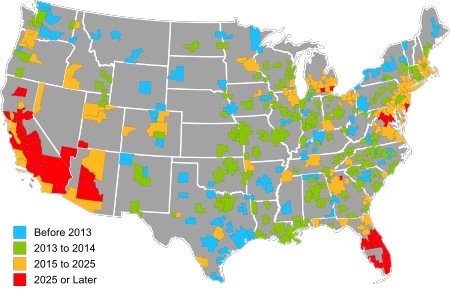 Housing prices, perhaps to some unexpectedly, continued stumble since the 2008 recession. For this year according to S&P/Case-Schiller Housing Price Indices, there was another 4% drop in addition to around 34% since the outset of the crisis. The consequences are incredibly broad and deep for the average American – from lost wealth and retirement savings to reduced employment mobility and credit flexibility. For example, labor mobility used to be one of America’s strengths; however the US has fallen way back in this category due to several factors as new training opportunities/education lagging, but also inability of employees to follow job opportunities cross country as they are chained to “underwater” mortgages or just not confident that they can access new home loans or even qualify for rentals once arriving at the new employment promised land. Banks Not Lending? Blame can be allocated as one’s personal situation and political affiliation may trend. However, it is evident that bailed out banks are not willing to provide mortgage financing, correctly or not, anywhere close to former standards despite being flush with cash. American Veterans Reflecting Economic & Home Ownership Health as Well as Our Care: One group of potential homebuyers that has almost gone completely unnoticed - US veterans of Iraq and Afghanistan. After WWII, there was a substantial push for veterans’ housing, and the whole US home market overall and homeownership benefitted for an extended period, (See Levittown New York). While some business are helping, jobs after military service are relatively few. Veteran businesses cannot be started without capital and especially if a soldier has been on duty or subject to constant call up. Veteran Support Organizations including one recently initiated by Film Annex online videos platform (where veterans not only get paid for blogs but present themselves as good options as employees and small business partners). However, this is only a drop. We should recall, (although I dare say few of us remember), that failure to provide home and job opportunities for First World War veterans produced social unrest, a “lost generation” and deepened the Great Depression. (Want to know more about film online video, website for making money or how to aid in military veteran employment, Read about G.I.V.E Global Initiative for Veteran Entrepreneurship). Arizona/Michigan Republican Primaries: Meanwhile, today’s Arizona and Michigan Republican elections will feature two states that have suffered some of the worst home value drops. (because it was one of worst performers, Detroit actually is only metro area to record small gain for last year). How will this affect voters, and do they think government or banks can do more. Tough to predict, but suspect many affected are so mad that they will strike out against any political or financial incumbency or perhaps just resign from the American Dream! Chart-Photo Courtesy of Housing Wire & projects by which year housing prices may recover to levels of last decade - some may take till 2025 or beyond! By Ambassador Muhamed Sacirbey – Follow @MuhamedSacirbey Facebook = Become a Fan at “Diplomatically Incorrect” Twitter – Follow us at DiplomaticallyX

Liver is the most important organ of our body . We need to maintain our liver health . Now i am goin…