If somebody told you about the story about a simple peasant girl who hears mysterious voices; who led the weakened armies of her defeated country to victory; who was burnt to death as a witch; and who later became a saint you would tell it could be not true. You would it a story of the 'let's pretend' kind. But you would be wrong because all these really did happen- to a young girl called Joan of Arc. 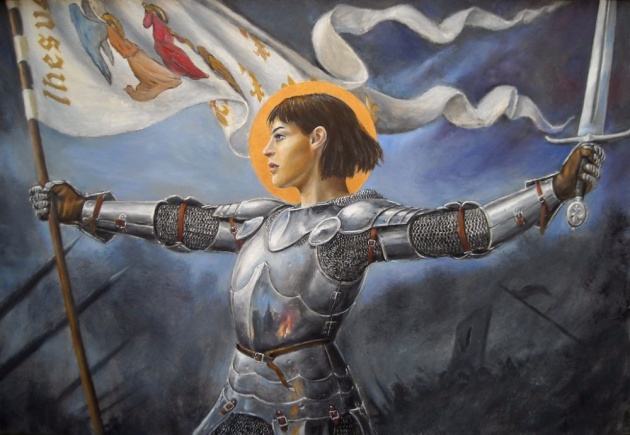 Joan (Jeanne D'Arc in French) was born on 6 January 1412, in the little town of Domremy, on the border between France and duchy of Lorraine. Her mother and father were farmers. Joan, like every country girl at that time, learned how to spin, sew and knit, but she was not taught how to read and write. This, again, was usual in those days. From early childhood, she was very religious. She spent hours in prayer, and never missed a church service.

French, at that time, was in a bad way. The French had been fighting a long series of wars with England-the Hundred Years' War- and now was almost helpless. England claimed the country. And King Henry VI of England, while still a baby, was actually crowned King of France in Paris, where English soldiers were in command. 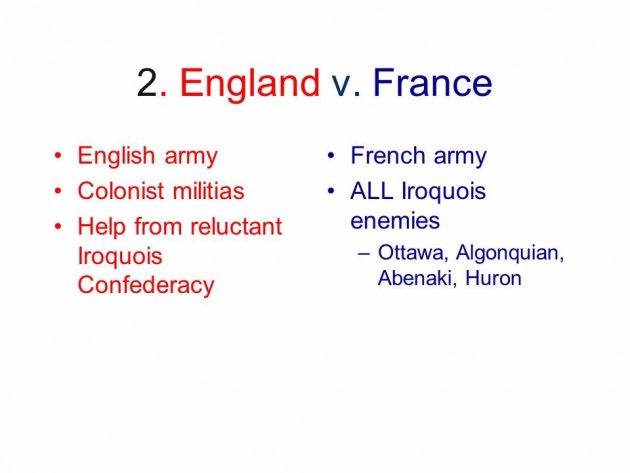 Young King Charles VII, the rightful heir to the throne, and at that time still uncrowned, he fled to the south. The shame of France made people miserable, but they were helpless. Battles were lost because nobody believes in victory. Town after town fell into the hand of the English enemy. Still, Charles did nothing.

Joan, along with the other French people, felt the shame and sorrow of her country deeply. One summer, when she was 12 years old, she heard a voice speaking to her as she sat in the garden. She was very frightened because she was quite alone at the time. She believed that it was a voice from heaven. Later, other mysterious voices joined in.

The voices told her that she had been close to saving France. Although she never doubted the message, she was at first quite astonished. How on the earth could a younger save the country? She knew nothing of the world affairs or the way wars were fought. She could only believe that God was using her for a special purpose. The voices continued for the next few years.

In 1428 she received a definite order from the voice. She was told to go to Robert de Baudricourt, captain of the French forces in the town of Vaucouleurs, and ask him to take her to Dauphin. Dauphin is the French word for 'crown prince', the heir to the throne. Charles had never properly been crowned King of France, so many people still called him the Dauphin the Prince. The voice told Joan that the Dauphin would give her an army. With this army, she would fight the English, who were attacking the city of Orleans. She would win the battle and set the city free.

So Joan set off for Vaucouleurs. She was only 16, so a relative went with her. When they reached Vaucouleurs, Joan told her story to Robert de Baudricourt. Robert turned to Joan's relative and said: 'Take her back to her father.'

Joan was forced to return home. But war came nearer. English burned Domremy and threatened all France. One more Joan went to Vaucouleurs to offer her help. And this time she persuaded Robert de Baudricourt to send her to Charles. He gave her men's clothing, a horse, and armed men to protect her on her way.

It was an 11-day journey to the castle of Chinon, where Charles was. All the way she was in great danger from the English and the Burgundians, who were French allies of the English. But she arrived safely at last. 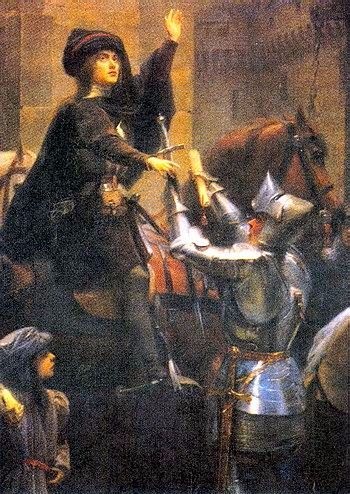 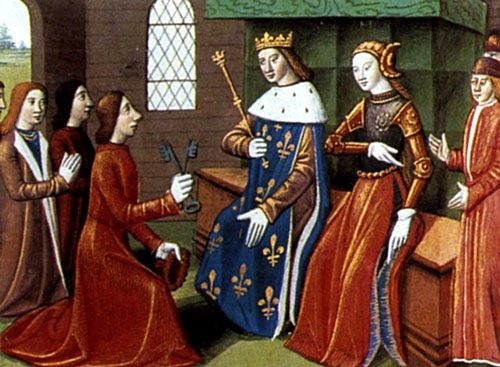 THE COURT IS CONVINCED

Charles was a timid man, and he had no money. He did not know where to turn in his efforts to stop the English advance. When he heard of a young girl who claimed to have a divine mission to save France, he had a faint hope that it might be true. But first, he decided to test her. He allowed one of her nobles to sit on the throne while he stepped bank into the ranks of his knights, pretending to be one of them. When Joan came into the room, she merely glanced at the man on the throne, then went straight up to Charles, curtsied and gave him her message.

But Charles still did not believe in her. For 3 weeks she was closely examined by lawyers and churchmen. In the end, she passed all the tests and convinced them her powers came from heaven. Charles then accepted her. He gave her armor and a banner and sent her to the army.

Joan immediately began to give fresh courage to retreating soldiers. Volunteers joined her from all over the country. She overruled the advice of old soldiers, and her plans and commands always turned out to be right. She was still simple and innocent in matters other than warfare. But when it came to planning a battle and inspiring troops, she was easily the best commander in the army.

In 3 months she had driven the England from the gates of Orleans, taken Troyes and won the Battle of Patay. She marched into the city of Reims, where Charles was crowned King of France, with Joan standing at his side. She was twice wounded in battle, but each time recovered to inspire her soldiers to carry on fighting. To this day she called the Maid of Orleans, in honor of her first great victory. She always carried a banner on a pole instead of a sword, because she refused to kill anybody.

Joan's work was now done, and she asked to go home. During the time that she served Charles, she has never been in charge of the French army. But her advice and ideas had been used by the generals and had never failed. So it was not surprising that the King would not let her go. But the voices were silent now, and Joan felt she had no more to offer.

Against her better judgment, she gave in to the King's wishes and let an attack on Paris, which was occupied by the English. The attack was beaten off, and Joan was badly wounded. The King began to show weakness again. He ignored Joan's advice and tried to patch up some form of peace with the English. 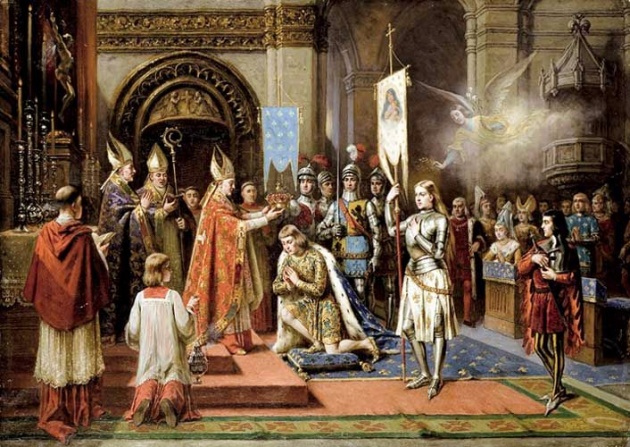 Joan of Arc attended the crowning of Charles the Dauphin as King.

CAPTURED BY THE ENGLISH

Joan was at last betrayed into the hands of the enemy. On 24 May 1430, at the Bridge of Compiegne, she found herself separated from the main body of her troops. Then she was thrown to the ground and captured. 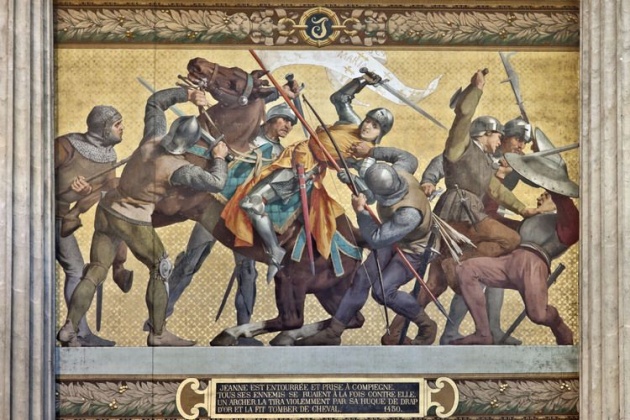 She was held by a group of Burgundians who later sold her to the English for a large sum of money. All this time Charles made no effort to help Joan.

The English were naturally overjoyed in their triumphs. They felt that if they could destroy this girl, all France would fall into their hands because she stood for the whole of the French resistance.

They knew they had to destroy not only her body but also the place she held in the hearts and minds of the French people. The only way they could do this was to have the Church courts find her guilty of being a witch. To be a partner of the devil, as witches were thought to be, was in those days the worst crime anyone could commit.

Joan was kept in prison for a long time. She was heavily chained, insulted and tortured by the English soldiers. She was questioned for hours at a time without stopping. Her imprisonment and trial were quite illegal. A few lawyers who were brave enough to protest about it were threatened. 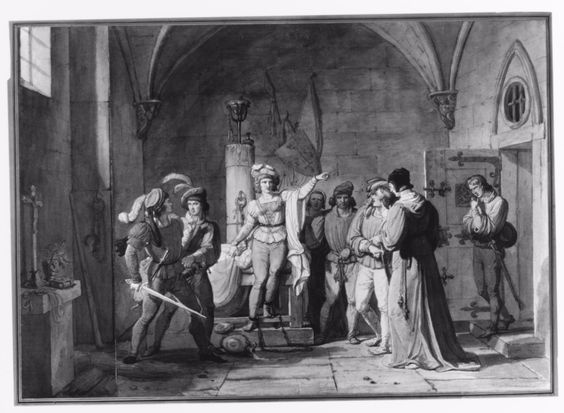 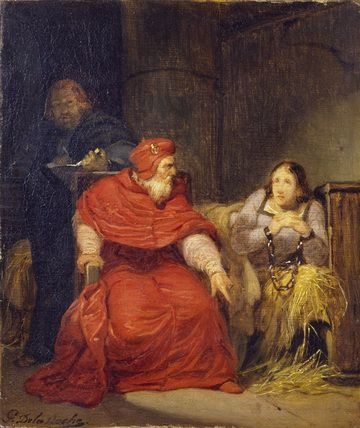 Joan's trial as a witch lasted 4 months. Her replies to the never-ending questions were so clear and innocent that her accusers found it almost impossible to find her guilty. Finally worn out, she was trapped into signing a confession of guilt. But later she took it all back, insisting that she had truly heard voices from heaven. The moment of weakness, however, was enough to give the Church an excuse for condemning her to death.

JOAN GOES TO HER DEATH

On May 30, 1431, a year after her capture, she was lead out to the burnt at the stake in the city of Rouen. Crowds filled the market square. The judges sat on a platform to watch the execution. 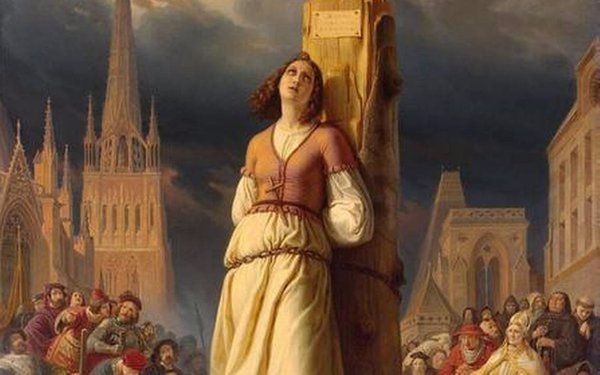 Joan faced a terrible death, and she well knew what was in store for her. She had exclaimed:

' I would rather be beheaded seven times than burned!'

Joan went to her death with calmness and great courage. As she was tied to the stake she begged for a cross, and English soldiers made one for her out of two pieces of wood. She held it next to her heart. As the flames rose around the 19-year-old girl, some of the English soldiers laughed. But many of the judges were in tears, and one terrified English noble cried out:

'We are undone: we have burnt a saint!'

HER MEMORY LIVES ON

But Joan's life did not end in defeat. She had seen her fellow countrymen in despair, almost empty of home and courage, and ready to yield to the invaders. In a few short months, she made France a proud nation once more. After her death, the English have driven out the land. Yet the victory belonged not to Charles, the living King, but to Joan, the dead peasant girl. 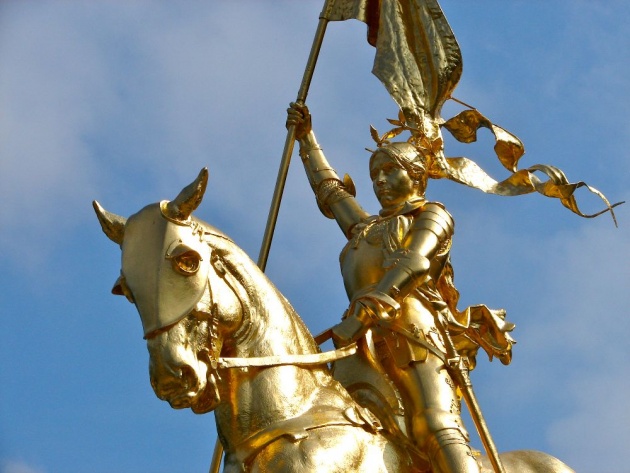 For several years afterward, the French people were told that Joan had deserved to die. But the French people would not listen. Twenty-four years after Joan's death, the Pope held a new trial and found her innocent. As the years went by, her honors grew. Her life and death have inspired many books, poems, plays, films, pictures and statues all over the world.

In 1920, almost 500 years after her death, the Pope declared her a saint of Roman Catholic Church. So she became Saint Joan of Arc. Her feast day is honored throughout France on 30 May each year.

The list credits, by the article, the other sources of the illustrations, used by author of Joan of Arc-The girl Who Saved France. Credits are listed below by separated comma:

All rights reserved. No part of this article

may be reproduced without special credit

in writing from the publishers in