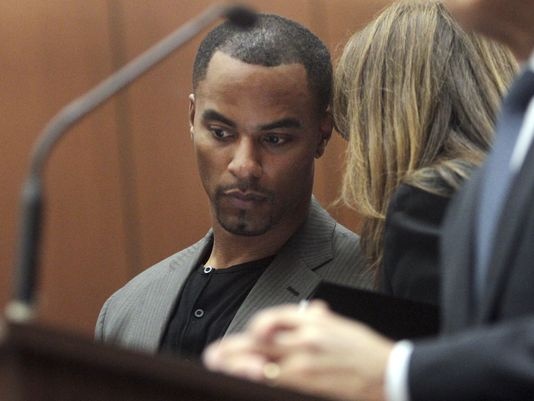 Former NFL safety Darren Sharper confers with his attorney Blair Berk during an appearance on Thursday in Superior Court in Los Angeles, where he pleaded not guilty to charges of drugging and raping two women. Sharper posted bail, which a judge increased from $200,000 to $1 million, but Judge Renee Korn attached conditions, such as barring Sharper from going to nightclubs or bars.(Photo: Bob Chamberlin, AP)

LOS ANGELES — Former NFL star Darren Sharper faces another rape allegation in another state and has been barred from being alone with women he did not previously know under bail terms set Thursday by a Los Angeles judge.

Sharper pleaded not guilty to felony charges stemming from allegations that he drugged and raped two women in Los Angeles in October and January. Judge Renee Korn increased his bail to $1 million and set the terms, including banning him from nightclubs and ordering him not to leave Los Angeles County.

"The court considers these crimes quite serious and has to evaluate the protection of the public." Korn said.

Sharper previously posted $200,000 in bail when he was arrested Jan. 17. After making his court appearance Thursday, he left the court without comment and departed in the backseat of an Acura TSX.

"The defendant in this case is a danger to the women in our community," Los Angeles prosecutor Stacy Okun-Wiese told the judge. "He is out there preying on women between the ages of 20 and 23 years old. He hangs out with them at clubs. He takes them out, and it's the same story in every case."

Police suspect Sharper, 38, raped at least eight women in five states, all after partying with them and giving them drinks that rendered them unconscious or overly intoxicated. That includes a new allegation that came to light Thursday - in Miami Beach, Fla., where Sharper lives. Okun-Wiese told the judge she also recently learned of "an additional subject" that will be investigated in New Orleans, where a woman had previously accused Sharper of raping her in September.

A second case in New Orleans would mean nine rape cases in five states: California, Nevada, Florida, Louisiana and Arizona. A spokeswoman for the New Orleans police told USA TODAY Sports that detectives there have not been approached by anyone with a second allegation involving Sharper.

"All of these were consensual contact between Mr. Sharper and women who wanted to be in his company, who voluntarily ingested alcohol and drugs in many cases," attorney Leonard Levine said to the judge.

Sharper's attorneys also noted that the women in Los Angeles refused portions of their medical examinations.

In response to that, Okun-Wiese said one of the women "was so injured and was in so much pain that she could not complete the examination. She completed as much as she could, but she couldn't bear the pain anymore."

Sharper is due in court for a preliminary hearing in Los Angeles on April 15. He only faces charges so far in Los Angeles, but that could change soon after authorities in other states complete their investigations.

In Los Angeles, he is accused of spiking his victim's drinks with zolpidem, a sedative known by the brand name Ambien. Okun-Wiese said Sharper has a prescription for the drug and that it was filled three times in the past two months. She said he went through 70 Ambien pills in 65 days and had 20 pills in his possession upon his arrest Jan. 17.

Okun-Wiese said she listened to the recordings of witnesses and said, "It's like listening to the same person over and over again" because the pattern is the same: Sharper gave them drinks. Then they pass out and "have no recollection" of what happened the previous night, she said.

DNA evidence connects Sharper to one alleged rape in New Orleans, according to court documents. Tests also show the presence of zolpidem on a drink cup in the case being investigated by police in Tempe, Ariz.

In Tempe, police this week released patrol reports of the alleged rapes there in November. According to those reports, Sharper went out to a nightclub with two women, returned with them to their apartment and insisted on them drinking some cocktails he made. One of them passed out almost immediately after drinking it, and the other started feeling ill, the report said.

When the woman who felt sick went to the bathroom, she said she became alarmed when she observed Sharper naked, on top of the other woman on the couch, the records show. Sharper then knocked on the woman's door in an apparent attempt to explain what she saw, saying that he and girl on the couch "have something going on." A third woman in the apartment woke up naked from the waist down and had no memory of how her clothing was removed.

When one of the women asked Sharper about these allegations, Sharper allegedly replied, "I don't really remember. I guess I could have done that. I'm really sorry."

The report noted that this woman wasn't sure if she wanted to aid the prosecution, a common issue in alleged rape cases.

Sharper played 14 seasons in the NFL starring for the Green Bay Packers, Minnesota Vikings and New Orleans Saints. He won a Super Bowl with the Saints after the 2009 season. He works as an analyst for the NFL Network although he has been suspended as a result of his arrest.

In an effort to convince the judge that his bail should not be increased, Levine offered to agree to conditions such as forbidding him from going to bars or clubs. He agreed to not be alone with any woman he did not know prior to Oct. 30, 2013, the date of first alleged Los Angeles incident.

"If he goes to a bar and meets women, he's putting himself in a position of being accused of misconduct whether it's true or not," Levine said.